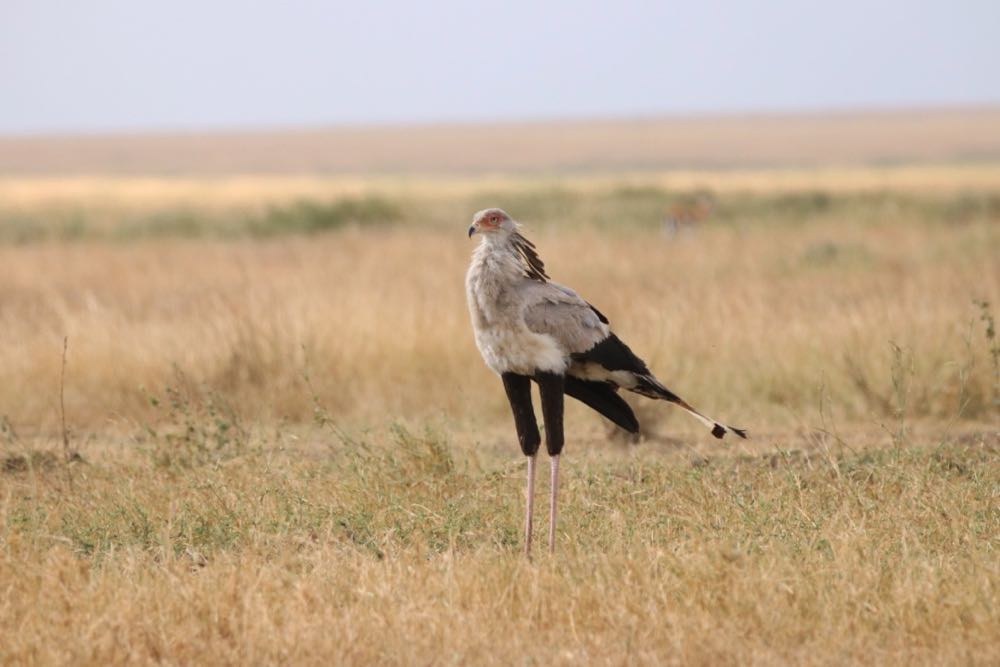 We survived the dust and unbelievable corrugations to the main entrance gate of Serengeti – Naabi Hill Gate.  We parked amongst about 50 safari vehicles and headed to the office.  Here we first had to “exit” the NCA – so that permit was stamped, then across to the main office to enter the Serengeti – we had our loaded TANAPA card, otherwise one can pay with a credit card, I think you could pay with Visa and Mastercard, but there is a definite preference for VISA cards in Tanzania.

Back into the car for another hour or so drive to the Seronera area, and the public campsite we were allocated called Ngu…  again those corrugations.  Poor Richard was shattered by the time we arrived at the very pleasant campsite.  The two camp attendants, Damien and….hmmm, can’t remember his name, provided us with firewood (20 000 Shillings – rather steep, but such is life).  We had a lovely chat.  In the conversation, I muttered something about us strange Muzungus travelling with our house, as Damien was admiring our Klippie.  Anyway, he says to me, “but you are born in South Africa, yes?”  I say yes, but I have a white skin.  Damien says “If you are born in Africa, you are African, Mama, you are an African”.  My heart soared and I still feel so happy.  Throughout Tanzania and to a large extent in Zambia, I have experienced no racism, either way.  You are accepted as a person, even if you are a Muzungu – people joke and accept the different ways our cultures do things or see things, but it is not regarded as bad, negative – it is just the way different people do/see things.  From now on, on those awful forms we South Africans have to continuously fill in at home and state our race, I am going to be writing African. 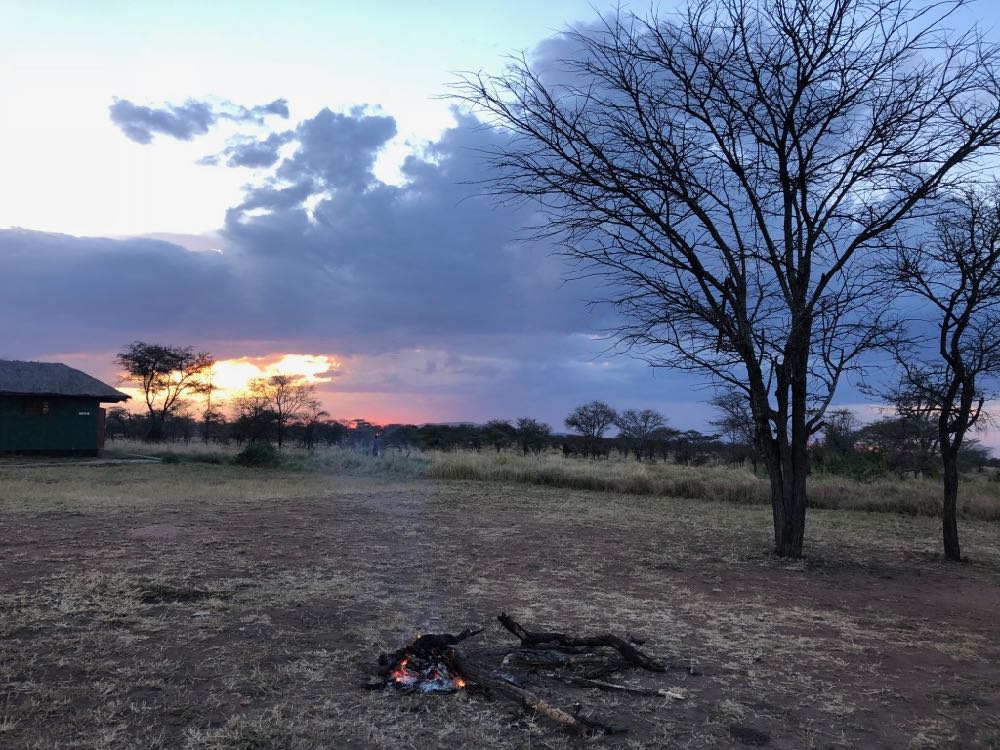 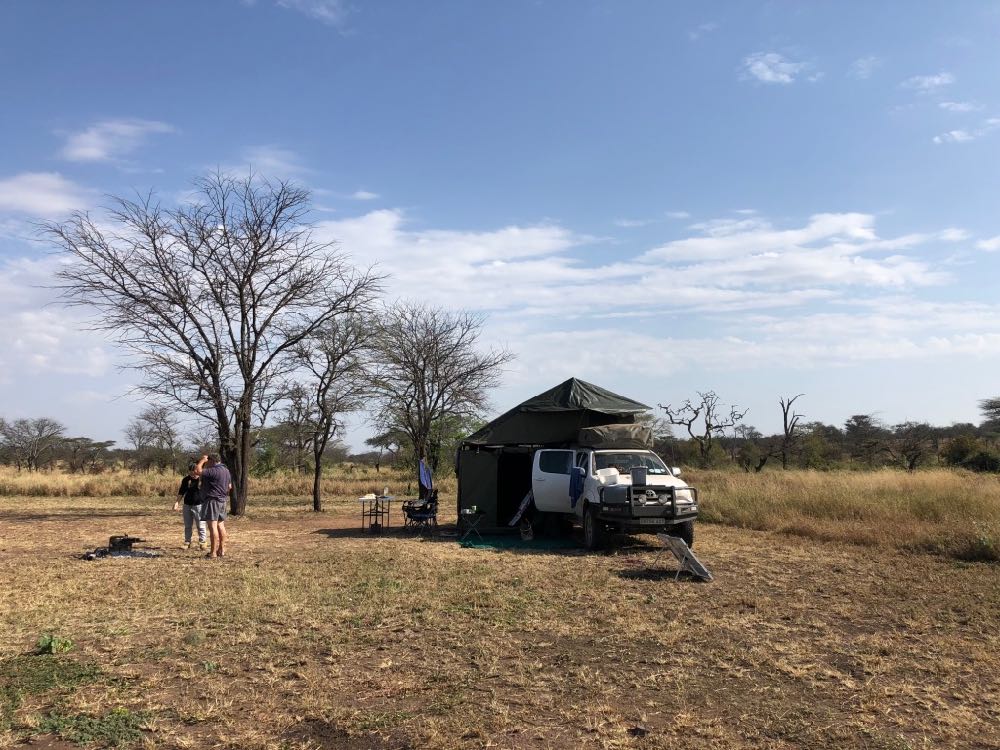 Anyway, back to the Serengeti, and our first campsite – as usual, the camp location is fabulous, but the ablution facilities could do with a bit of updating.  They were clean, and mercifully there were only a few safari tents at this campsite, so the ablutions were not overtaxed.  While Richard and Emma were having a cold shower, I started getting things ready for dinner.  We had spied an olive baboon perched high in a tree about 50 m away, but it was early evening, and baboons tend to head for high ground/trees about this time, so I took out my basket with Richard’s precious enormous avocado, onions, potatoes and bananas, and had placed it on the ground.  I trotted around to extract the meat from the freezer, and when I came back around, there was this huge male baboon eating Richard’s avo – when he realised I was watching in a bit of shock, he literally stuffed the avo into his mouth, I grabbed a stick and tried to chase him off, banging the car, but he just looked at me and squashed more avo into his mouth.  I wanted to laugh, but was cross with myself for taking the veggie basket out, and I also wanted to get the camera, but knew that baboon would than devour what was left in the basket.  More shouting and trying to look big and fierce – he eventually grabbed the bananas and sauntered off into the veld.  Richard arrived – distraught at his missing avo and wanted to know why I didn’t chase the baboon away!  So for those of you who don’t know this, male baboons are not particularly scared of women.  Once Rich was around the baboon did come back, but realised a male was around and sauntered away and left us in peace!

We had an enjoyable braai, despite losing some of our food, and settled in for a reasonable night’s sleep with lion and hyaenas serenading us.

We had a lie in next morning, enjoyed a leisurely breakfast, a repair or two after all the rattling, packed up, filled up with diesel in Seronera, then headed north to Lobo. 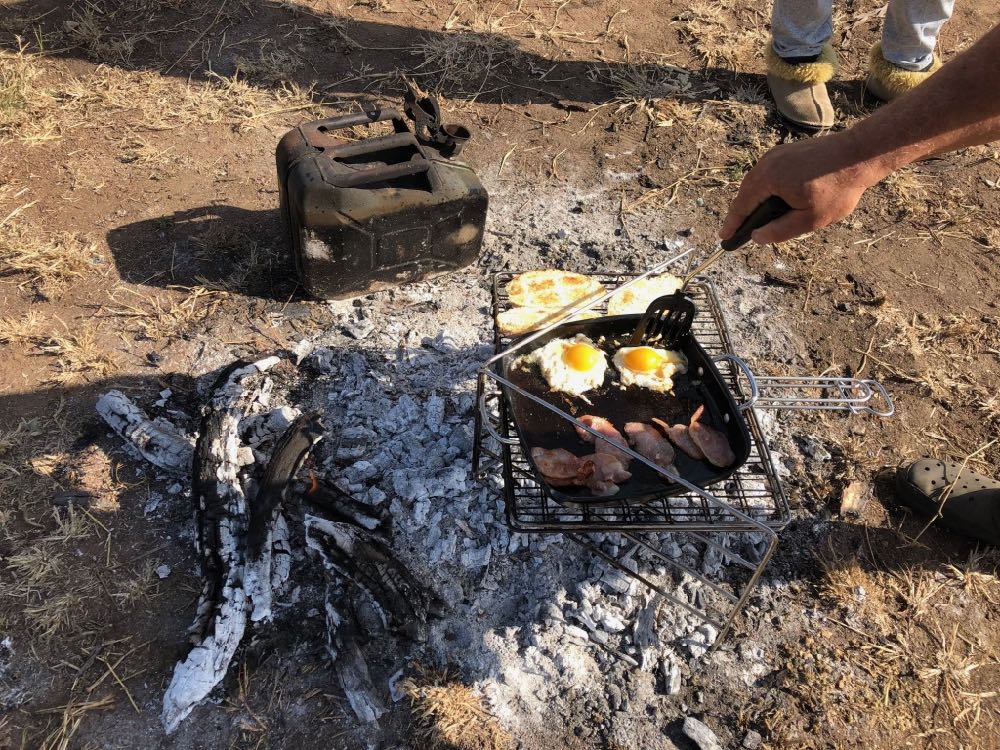 The southern Serengeti is vast grassy plains, interspersed with trees, and the in areas, some granite koppies dot the plains. The further north one goes the hiller it becomes, moister. 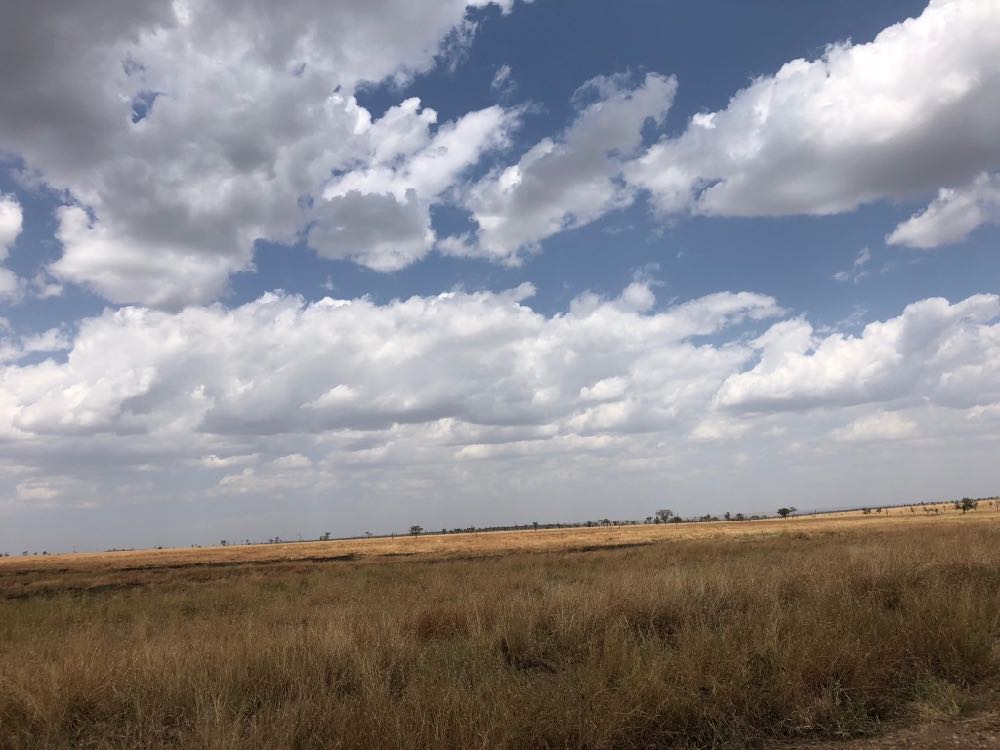 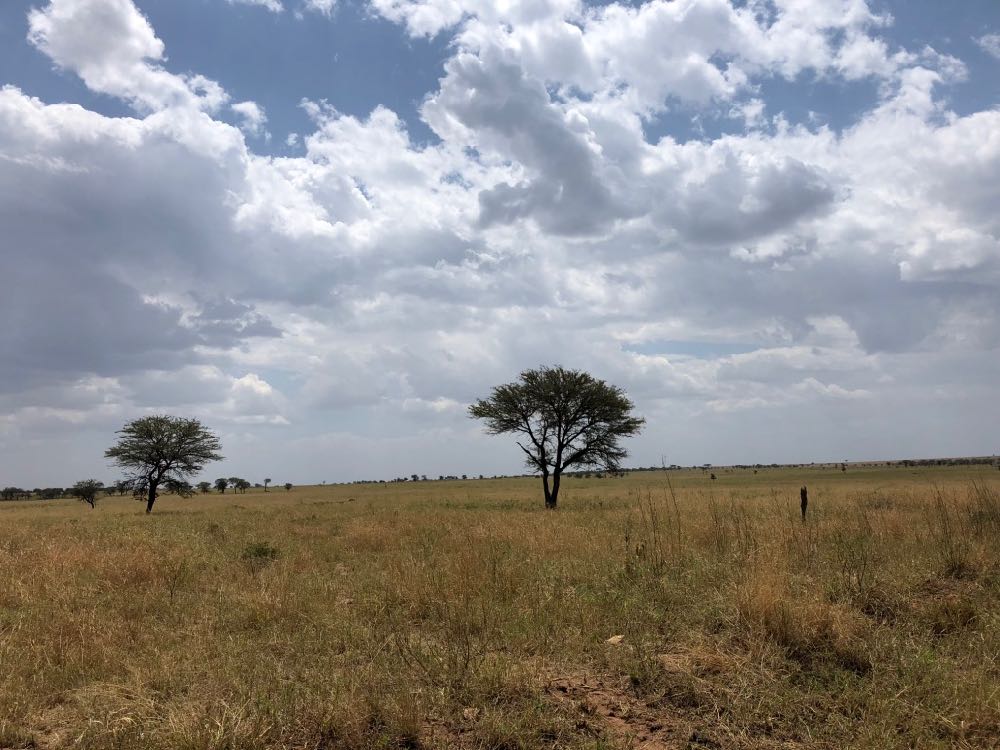 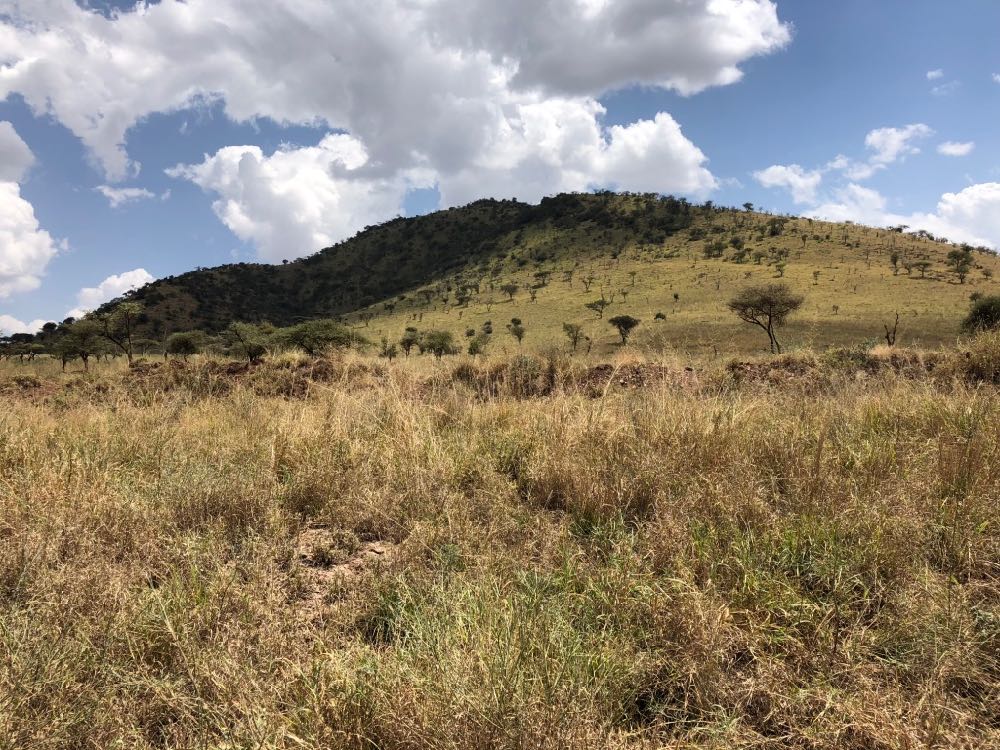 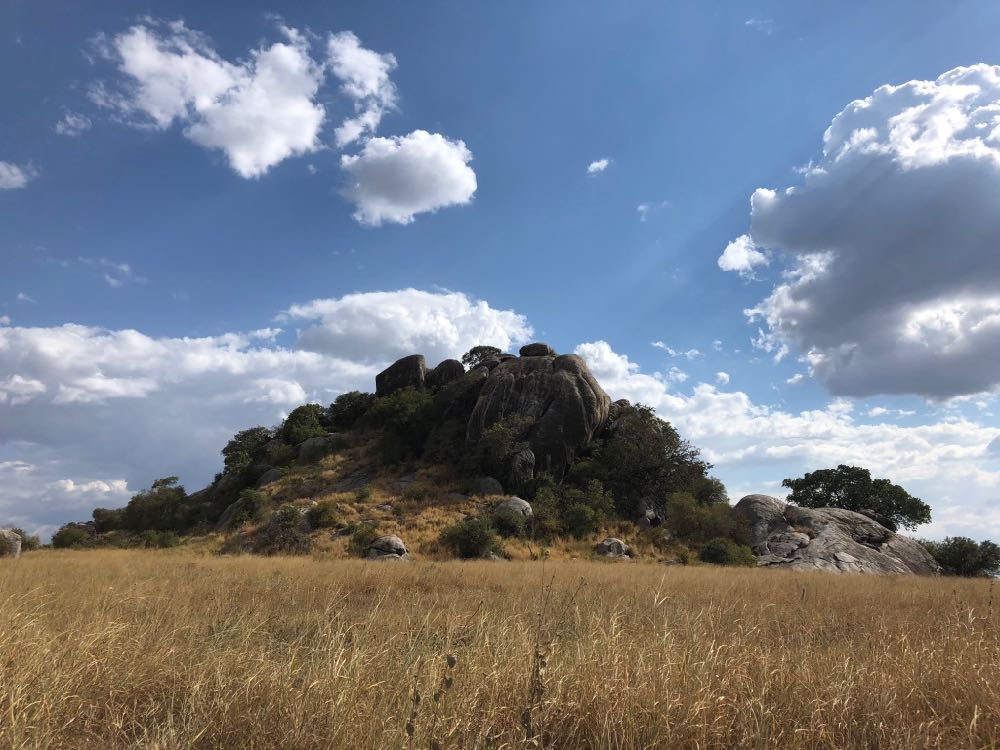 One sees zebra, impala (in the more wooded areas), Grant’s gazelle, Masaai Giraffe, buffalo, Coke’s Hartebeest, and if you are lucky through the tall grass you spy a few predators.  We saw hyaena, black-backed jackal and a bat eared fox, cunningly spotted by Emma. 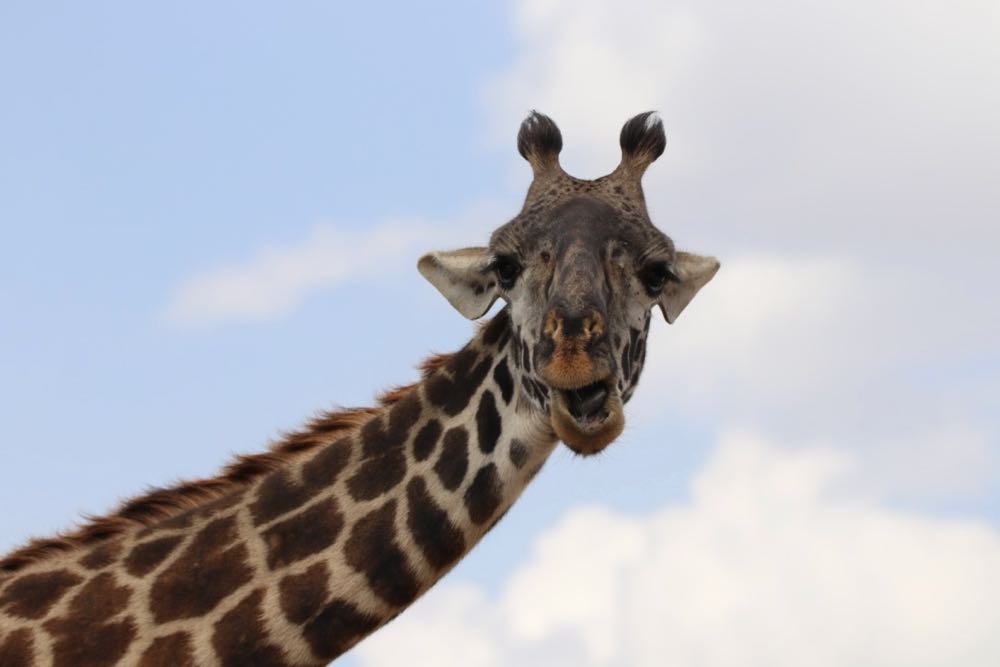 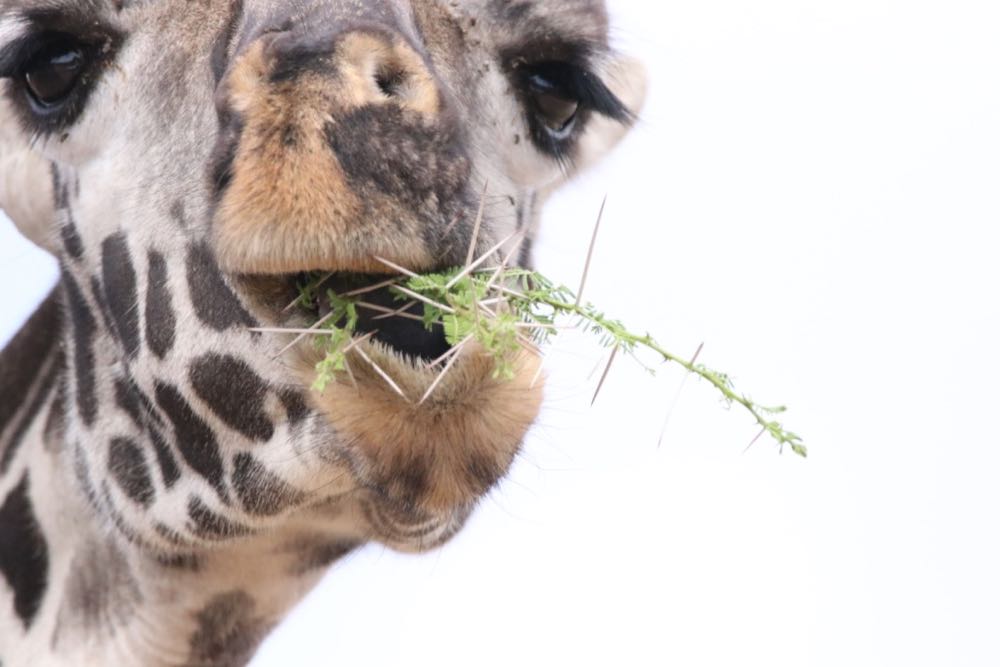 We wound our way up the hills to Lobo – the public campsite is located behind a lodge/hotel – you can’t see it, mercifully, as the campsite is around the hill. 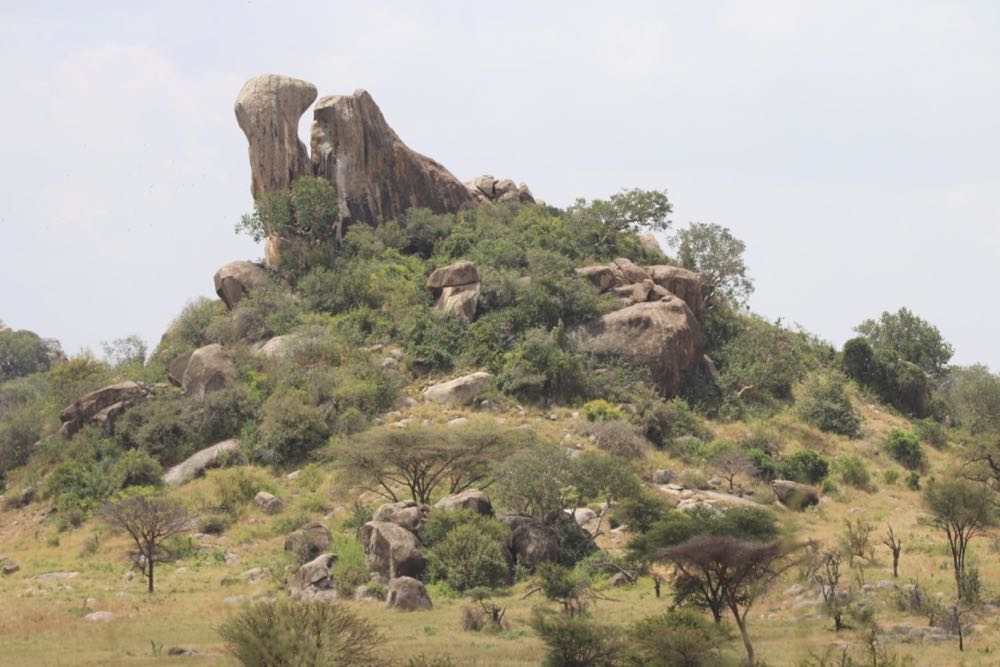 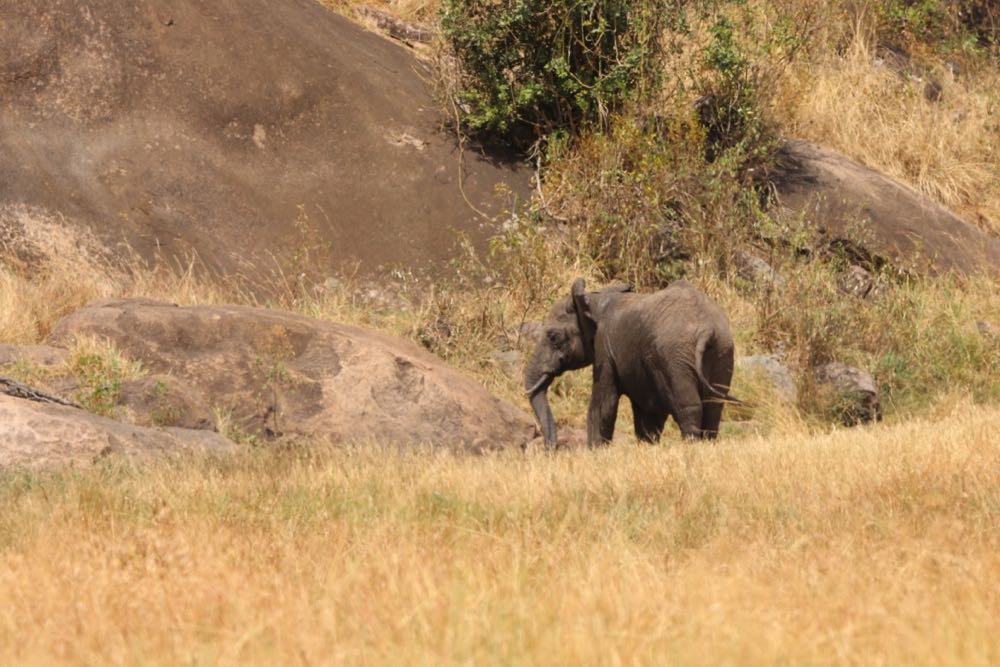 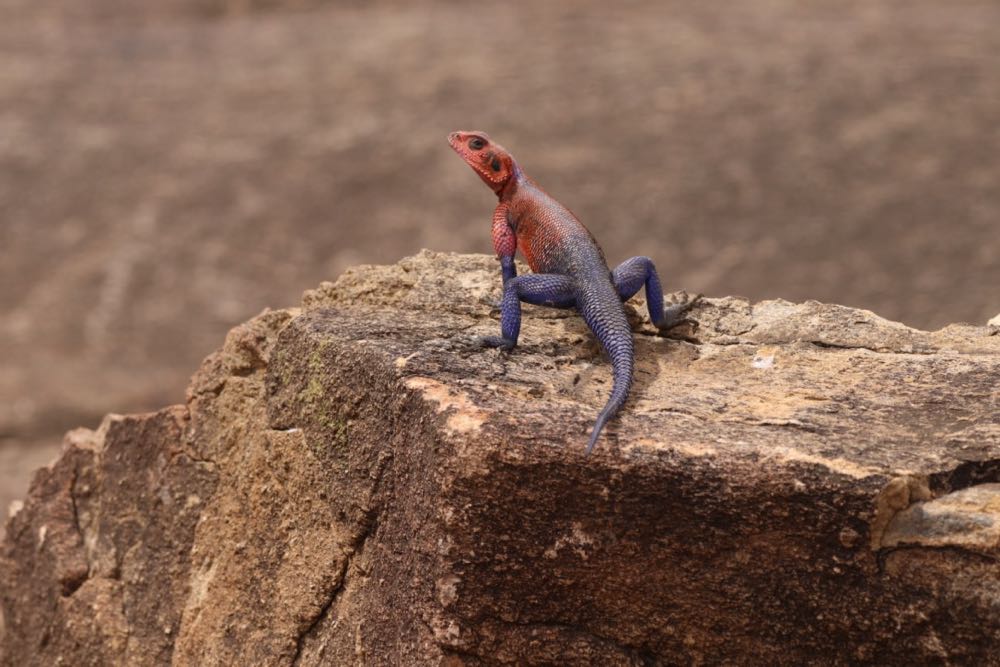 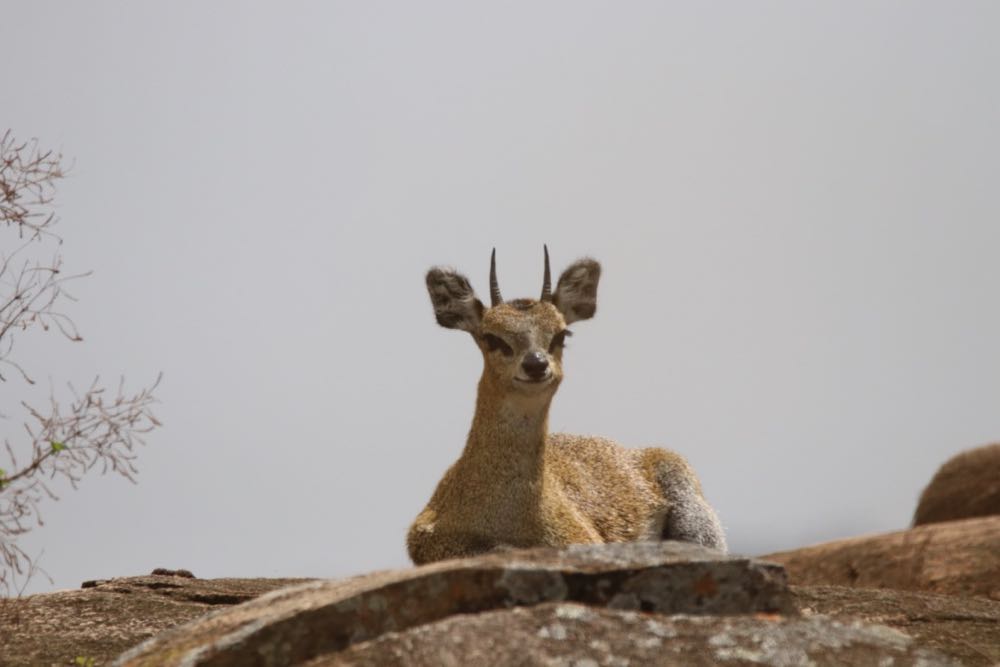 The hills are granite boulders, weathered over millennia, with beautiful views over the plains and hills.  The campsite is on a grassy slope at the base of beautiful boulders.  The ablution block, again, is small – 2 loos for ladies, 2 cold showers – and not on a fabulous state.  We arrived around 2 pm – early, thank goodness for 2 reasons – as we were setting up, the rain started, and then more and more safari vehicles arrived disgorging tourists on the camp safaris – little bell tents popping up everywhere – we were surrounded by Italians, Canadians, Swiss, Spanish etc etc.  So the ablutions facilities were totally inadequate.  Anyway, we were fine.  Rich and Emma cooked a delicious supper – left over steak used to make wraps – with various additions.  Perfect camp food!

Other camp visitors, who enjoyed raiding the kitchen area where the various safari chefs were trying to prepare meals for the hordes, was a resident troop of olive baboons – sneaky antics, and not shy!  Rich made good use of his catapult to keep them at bay – trick was not to hit a tourist!  A buffalo, that Emma named Boris munched his way around the front of the camp – little unnerving, but really, the buffalo and elephant are the most chilled I have come across – still, huge respect and keep a healthy distance. 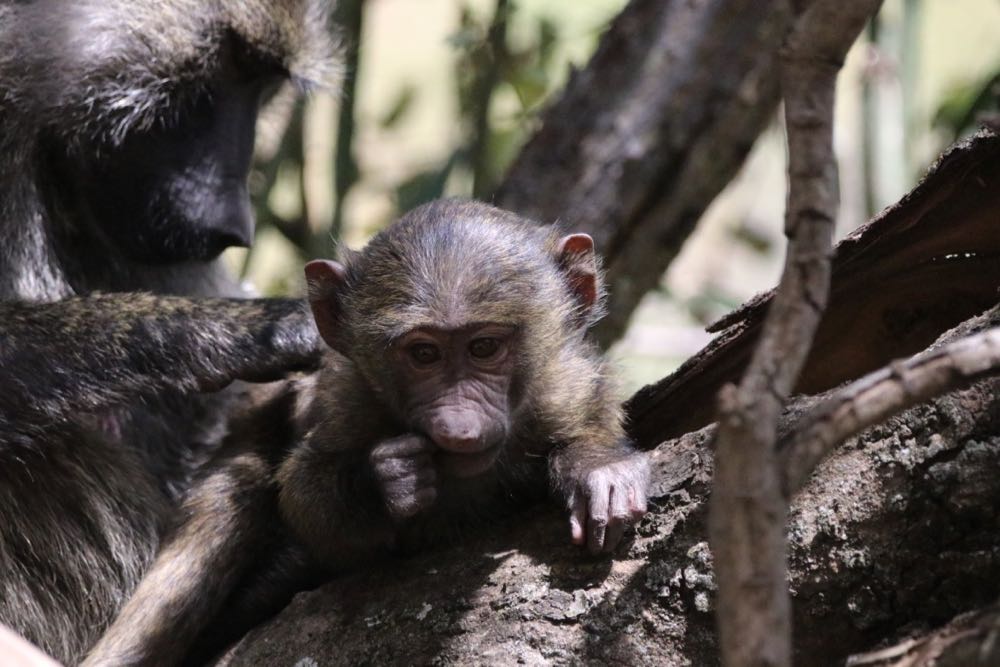 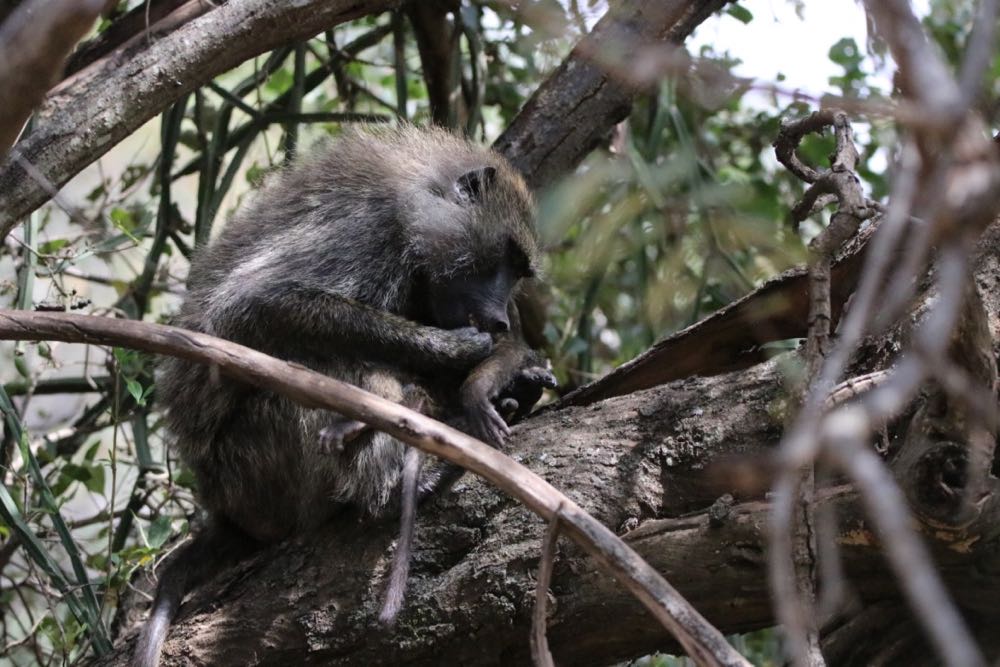