Bangweulu and the Shoebill that wasn’t

We would have loved to explore a little more of Lavushi Manda, but we did not have the time. Bangweulu was calling. The road winds it’s way through woodland and as one descends, the vegetation opens up a little, the landscape flattens out, and the number and size of the villages increases. Many of the clay brick houses in Lavushi Manda and at the beginning of the Bangweulu Reserve are beautifully decorated with geometric painting, or different colored red bricks are used to create a pattern. 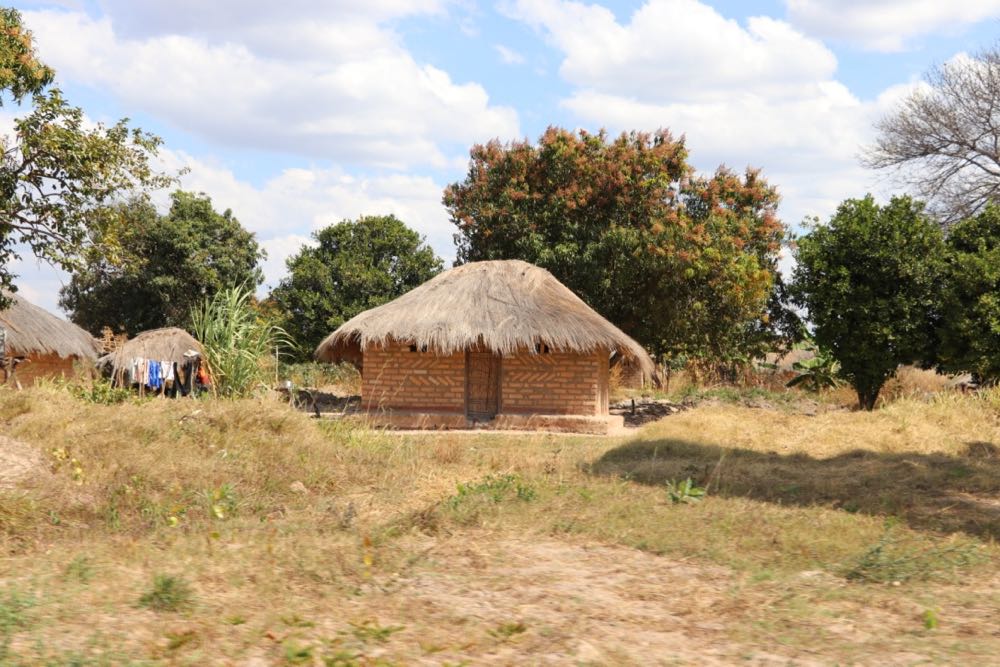 Neatly swept yards, for want of a better word, and people drawing water from wells, grinding cassava, doing the washing. As we neared the swamp area, the road deteriorated. 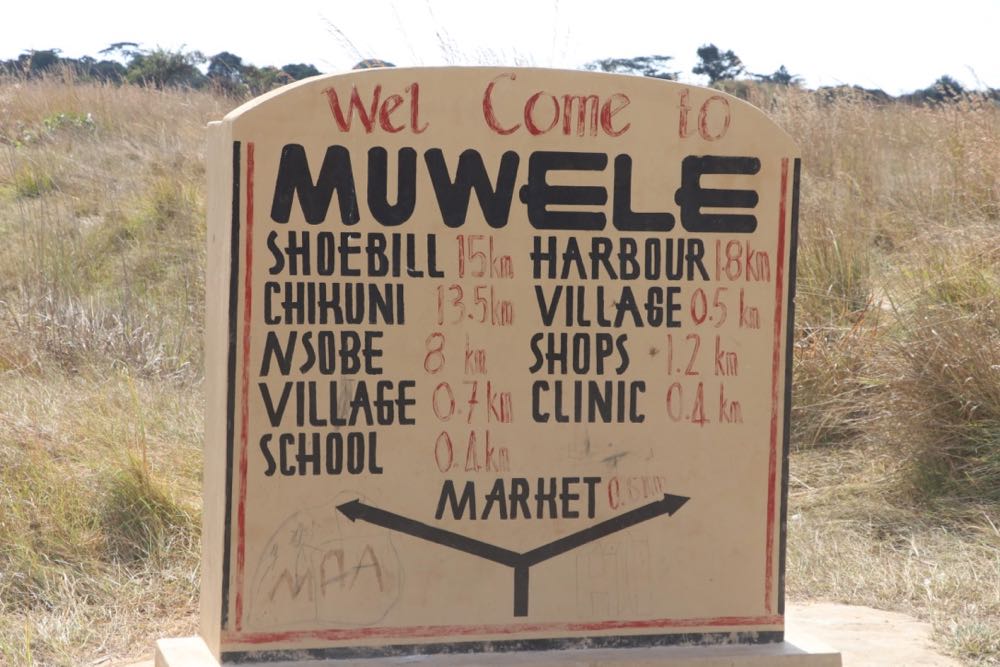 We bounced our way through never ending villages of the so-called swamp people. Transport in the area is foot or bicycle…and everything gets carried on the bicycles. Literally hundreds of very young children played and helped with chores. We were told by our guide the next day that the girls get married very young…around 14 years old. Average number of children per family is around 8 children.

Cassava is grown on mounds so that in the rainy season the crops are not washed away. 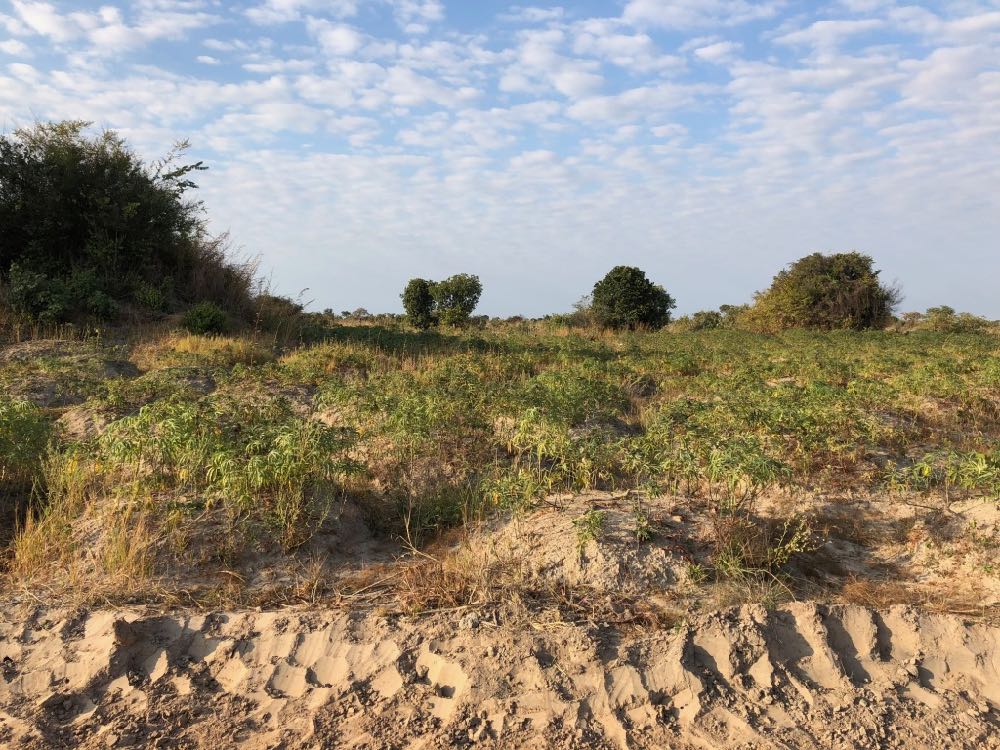 Protein is fish caught in the wetlands and swamps. Now it is the dry season, so the plains are free of water, which means that the people trek out to the swampy wet areas and the rivers, live out there for a few weeks before returning to the village with a supply of fish. In the wet season, the water is almost in the village from what I could figure out.

At last the sign for the campsite greeted us. The vast plains extended before us and reminded of us Luiwa Plains. 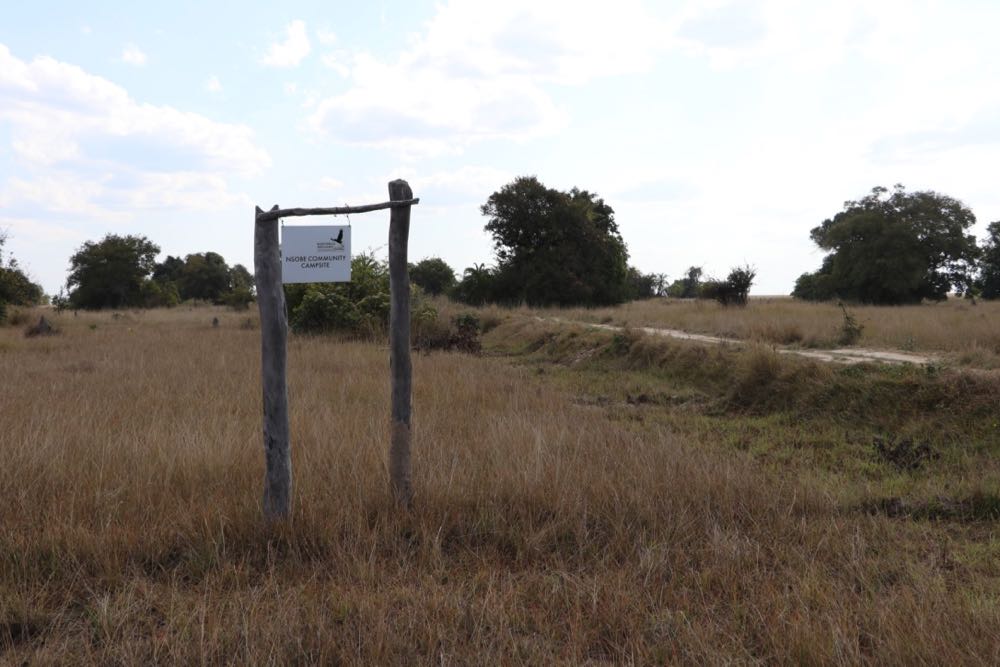 Three gentlemen explained we could choose a site, that they would bring us some water for washing, what time would we like to shower as they would fill the tank with hot water ( no donkey), and explained how payment etc. worked. They also said they would do our laundry…. brilliant! We gave them quite a pile of laundry, and off they went on their bicycles to prepare hot water and fetch more firewood. Godfrey was our guide and I think the guy in charge of managing the campsite. So gentle, great sense of humor too. By the time we had set up our camp on the edge of the campsite overlooking the plains, Godfrey and Co had even lit our fire for us! Really, these people are so hospitable, kind and genuinely friendly. I have fallen in love with Zambia and its people. 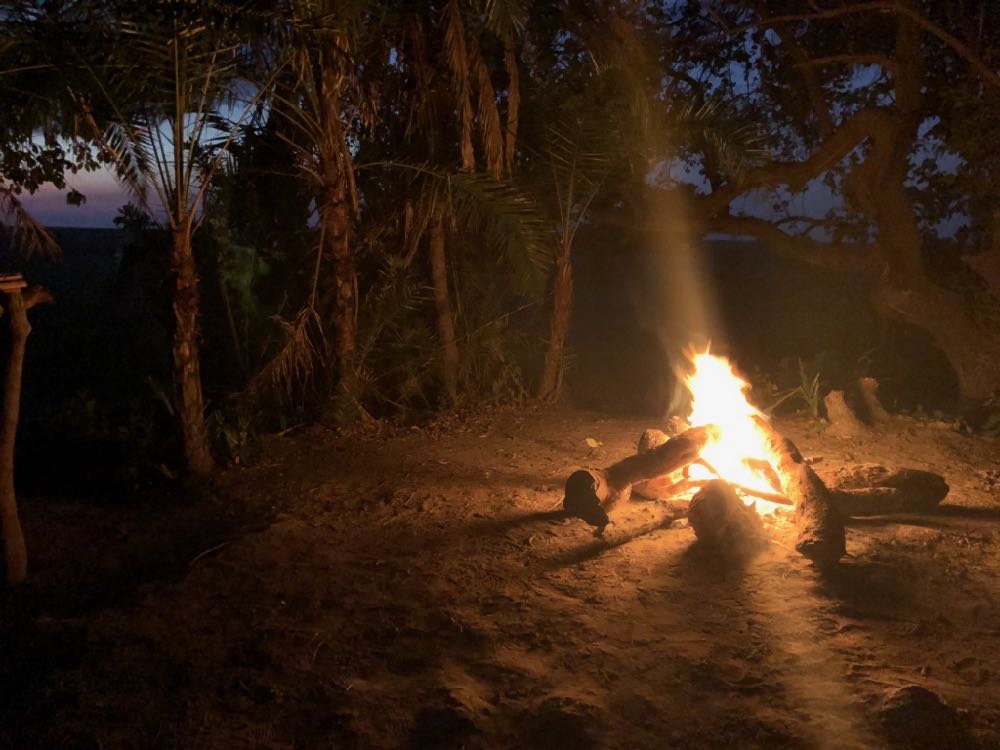 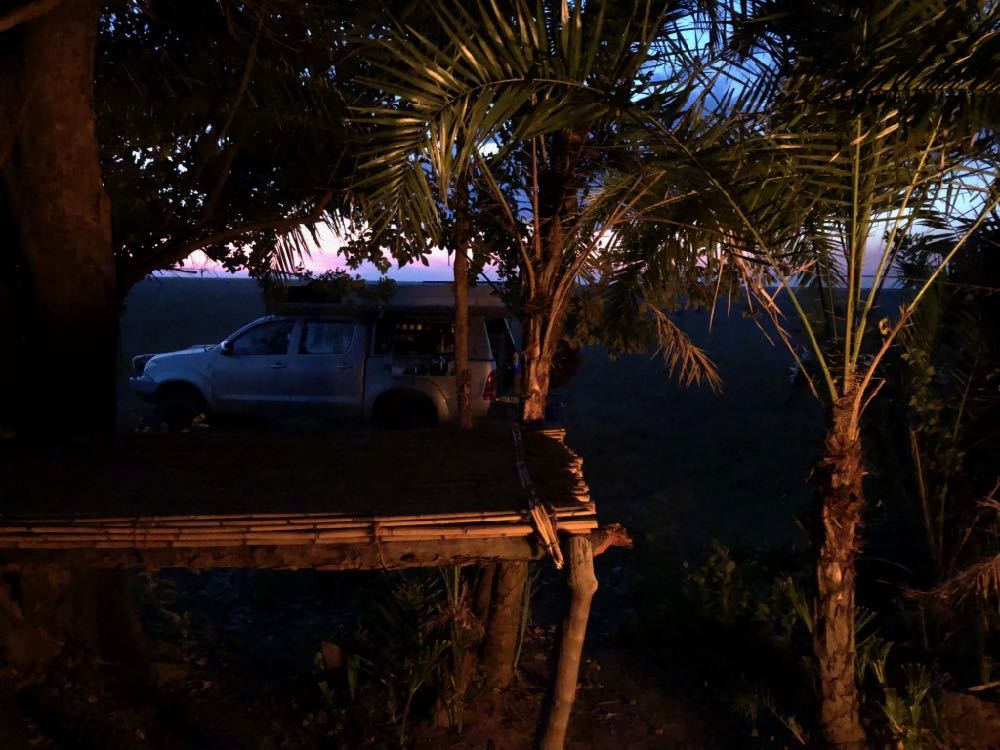 How it works is that one pays the park fees at the gate of the park, which we had done. As we arrived around 5 pm at the campsite, Godfrey said he would take us to the office in the morning to pay the camp fees. At 7 am Godfrey was there, hopped in our car and we drove across the plains to the office. 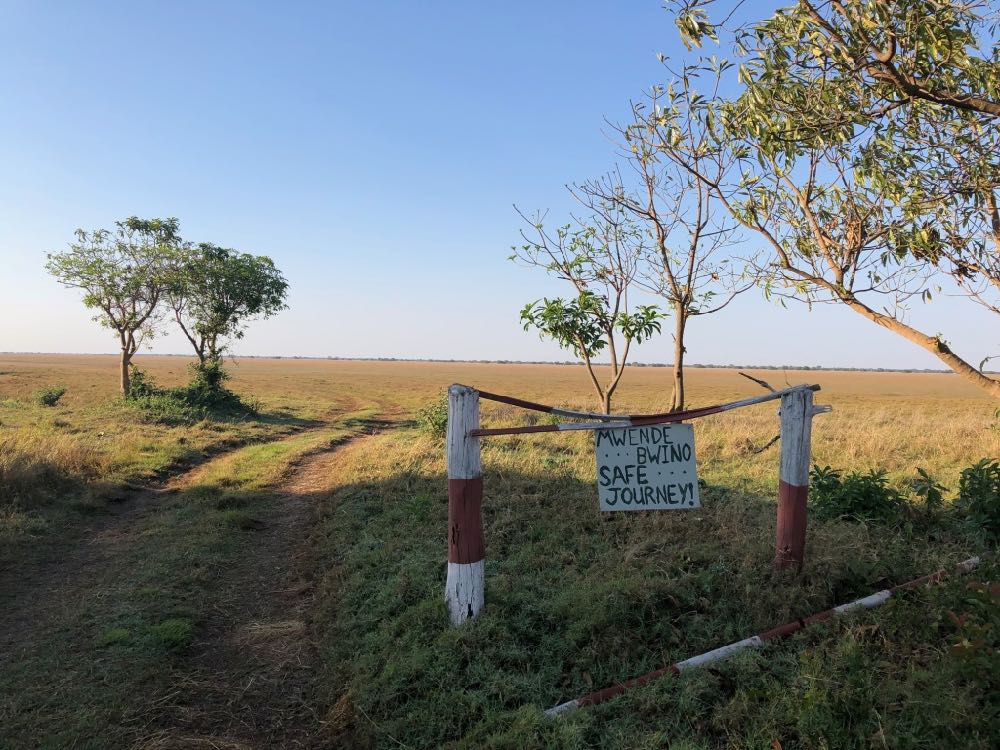 As we approached the office we were met by a herd of at least 1 000 Black lechwe, leaving the evening safety of the river and reeds to graze on the plains and woodland edge, before trekking back to the river in the evening. Beautiful antelope, and definitely my first sighting of such a large herd of any species. 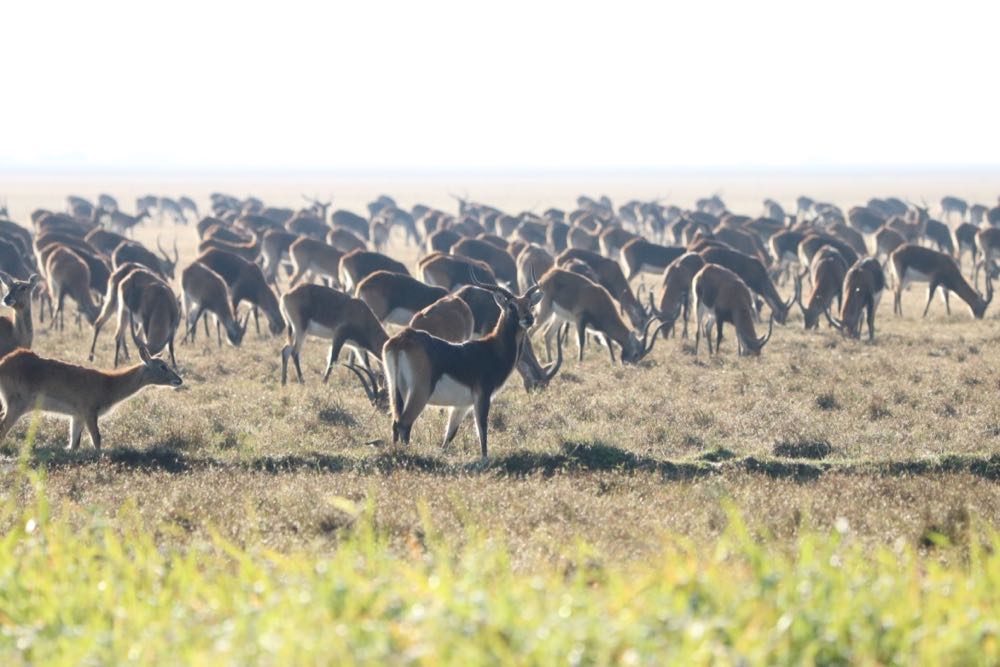 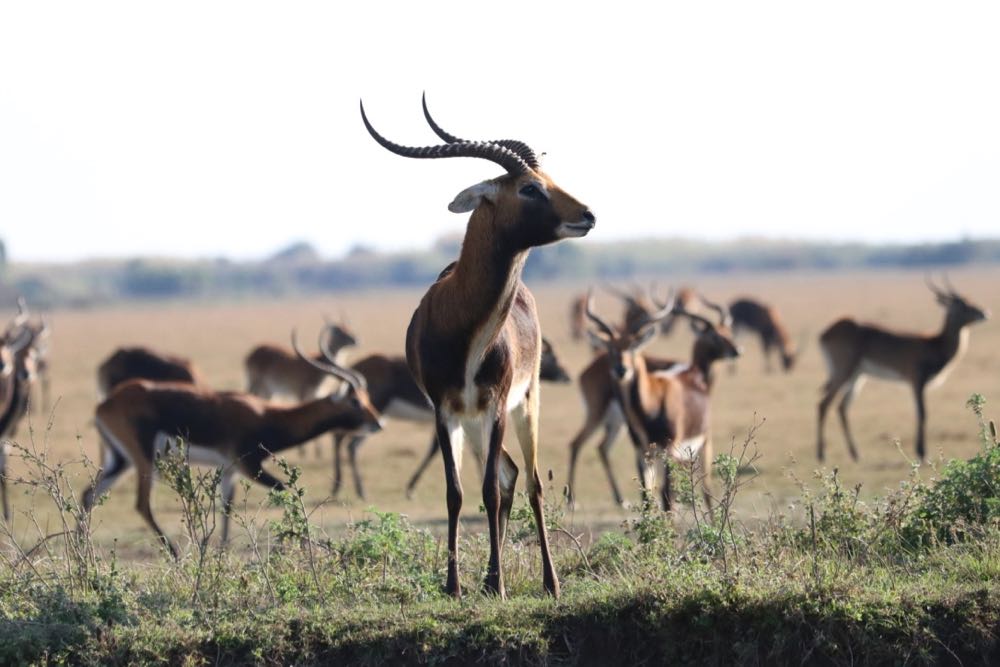 We opted to have Godfrey be our guide for the day….which meant a morning and then an afternoon drive to see the game, birds and a little of the fishermen’s way of life and how they catch fish in the park. This cost $30 per person, but we felt it was not a bad price, and at least we could support the park and the people who work in it a little. Also, the guides know the movement of the animals, and we would have driven around aimlessly ( one or two roads), no map to speak of, and we would have missed a lot.

Apart from the special black lechwe, 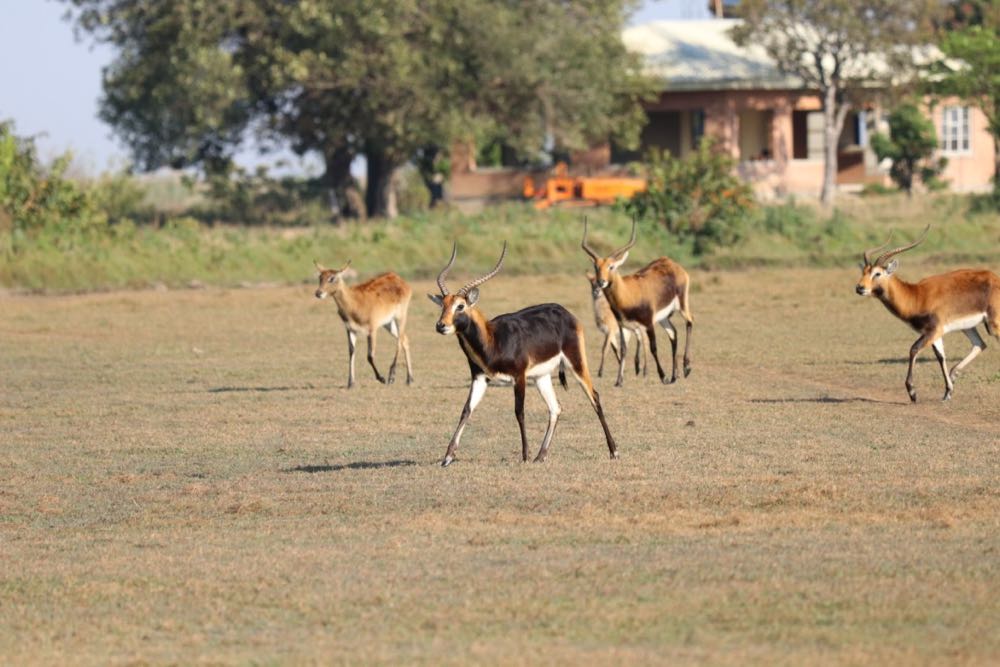 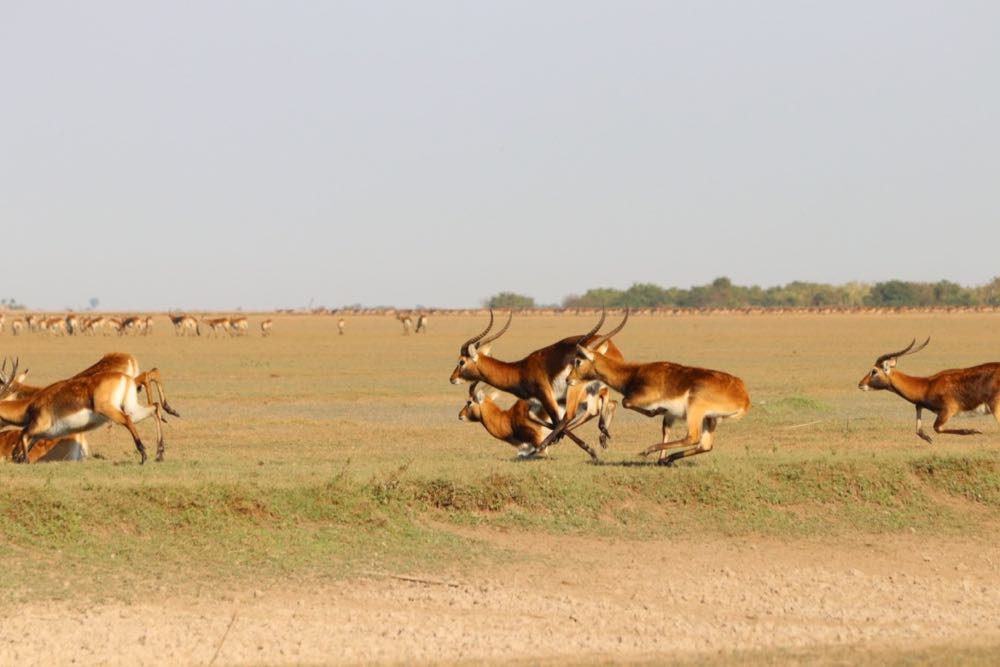 we eventually spotted the Bangweulu Tssesebe…large antelope, that can run at incredible speeds. They differ from the “normal tsessebe in that their heads are bigger, horns are thicker, and their coat is much darker. They are truly beautiful. We also had a couple of sightings of side-striped jackal as well as quite a few bird species. 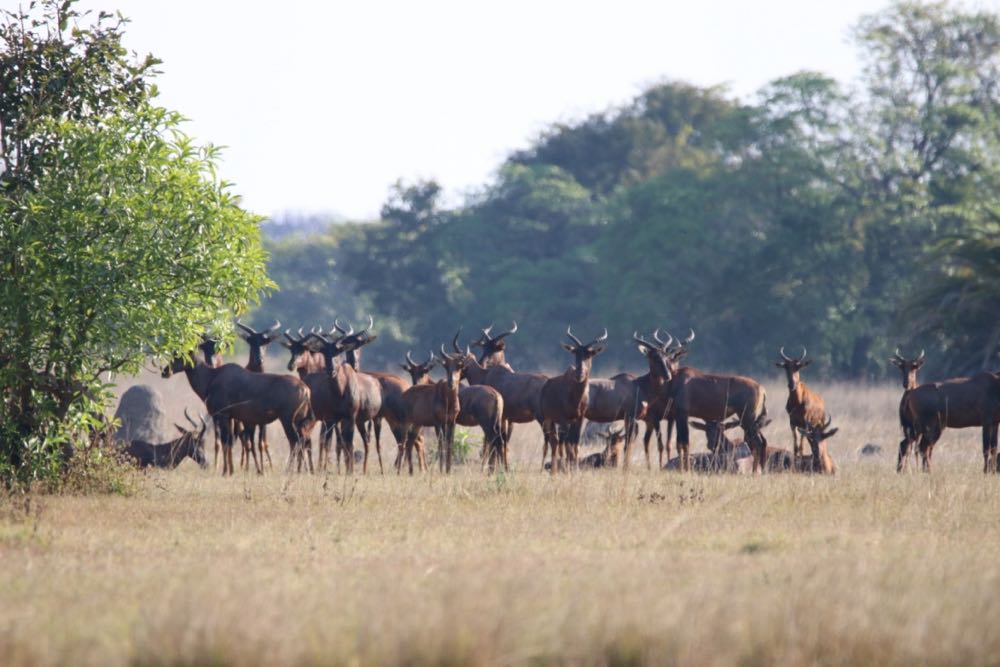 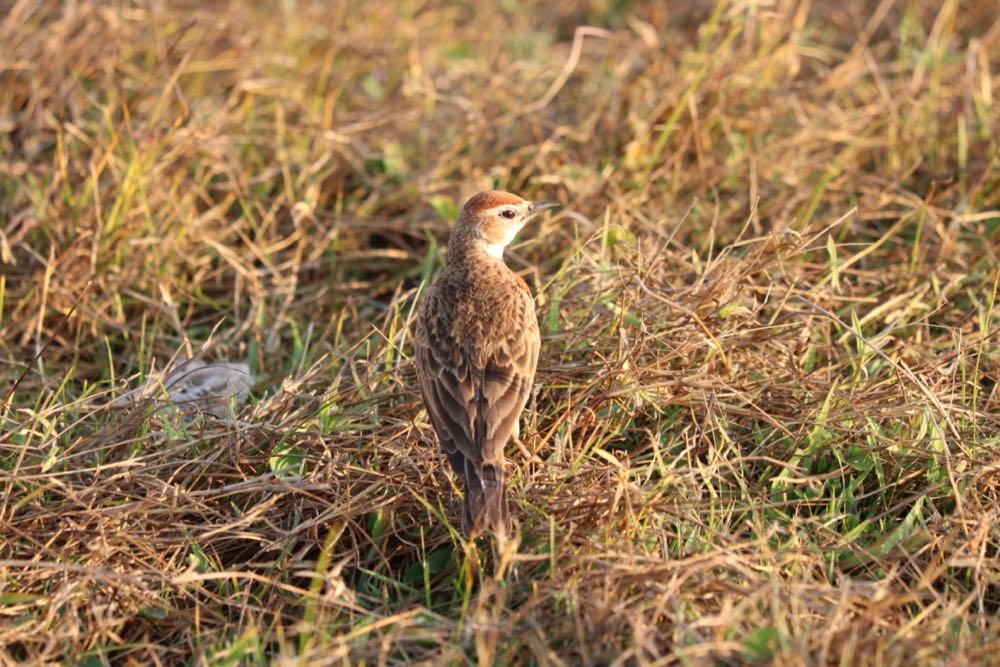 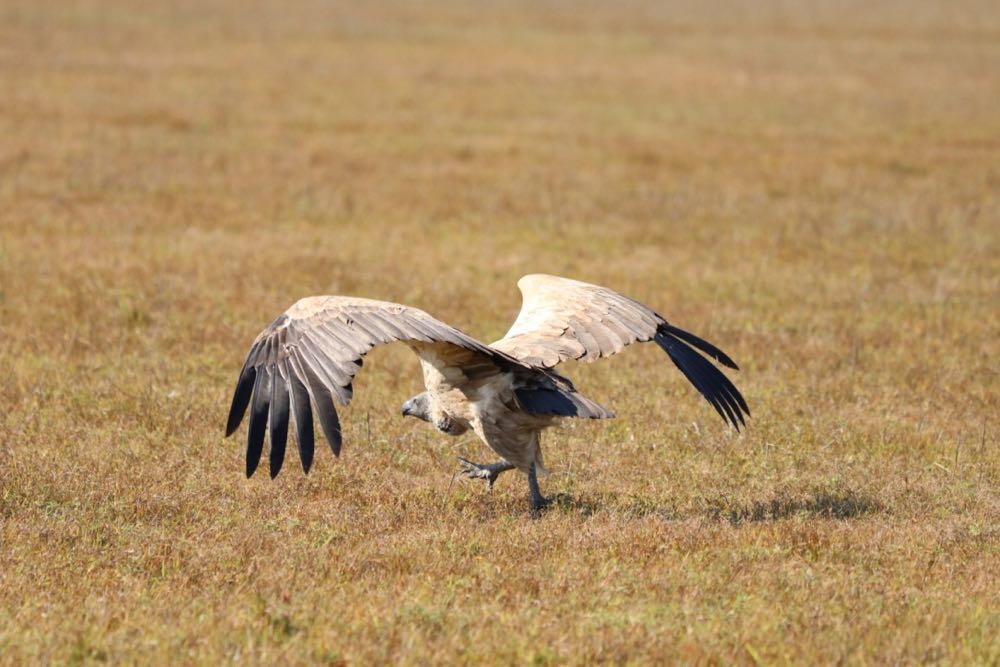 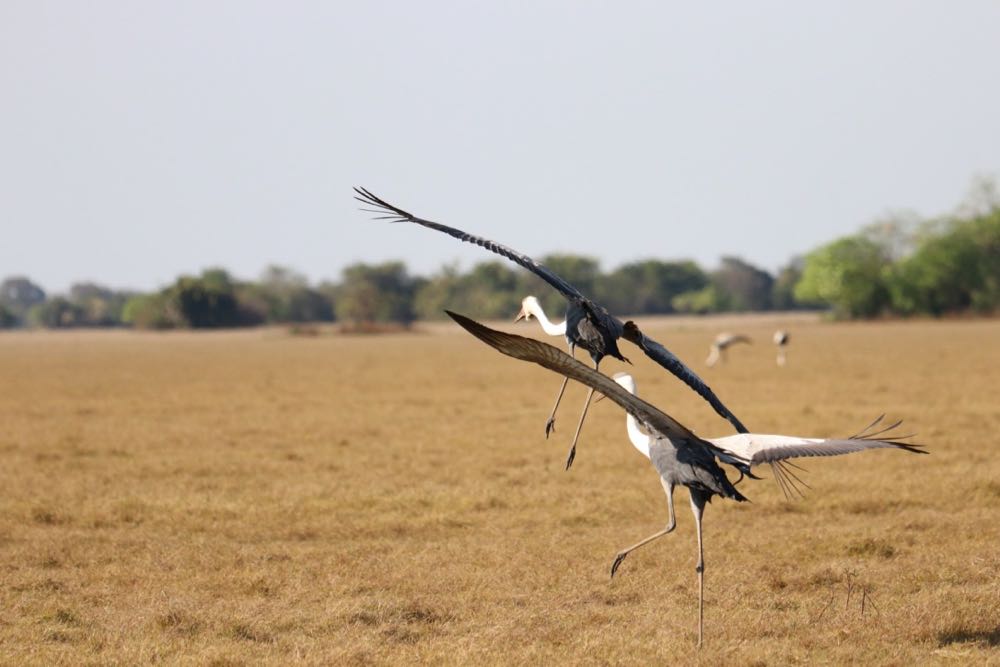 Our quest to see the Shoebill came to naught as we were there in the wrong season….one bird was nesting a drive then a 4 hour walk through knee deep swamp…one way, and one was on the other side of the park. We decided to come up again one day! In April, apparently is the best time for Shoebill. I definitely plan to come back. 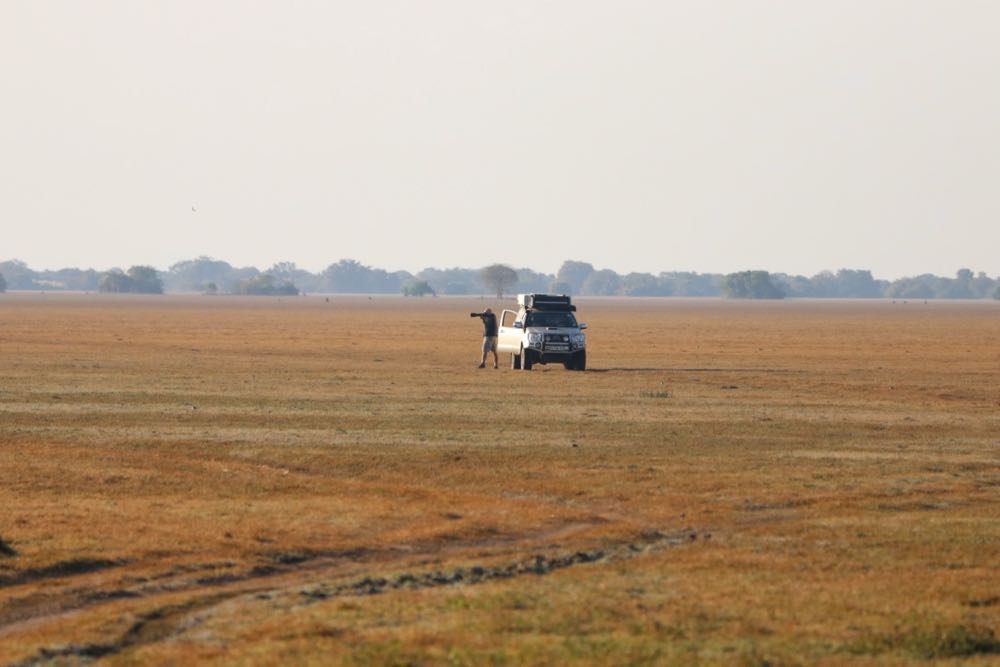 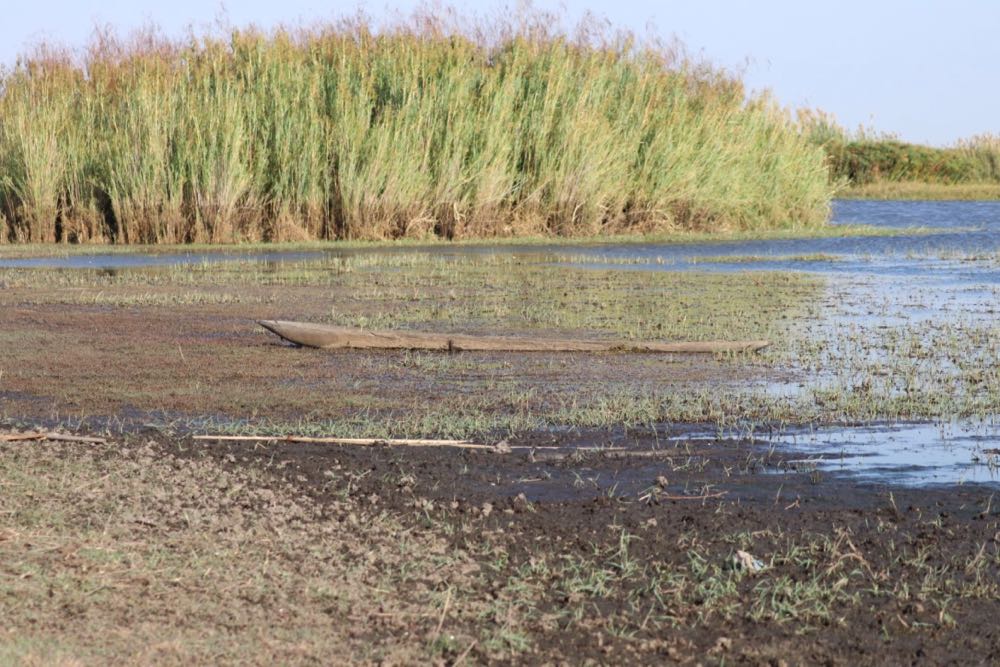 In the evening our washing was returned to us…clean, sundried … wonderful. We gave the team a payment for all their efforts – and said a little thank you to them. During our drive with Godfrey, who was helping with the bird identification, he commented on my bird book…he said he wished he could find something like this in Zambia so that he could become better at learning the English names for the birds, and also learn the names of birds he does not know yet. This is the third time on our trip that I have encountered this. When I am home I would like to buy the appropriate bird books for these guys and send it to them. Ultimately I would like to set up something to fundraise to purchase a few books for these reserves and conservancies, try to get the books at a cheaper bulk price and get them to the guides who, I know, would really treasure them.   That project I will tackle in October. 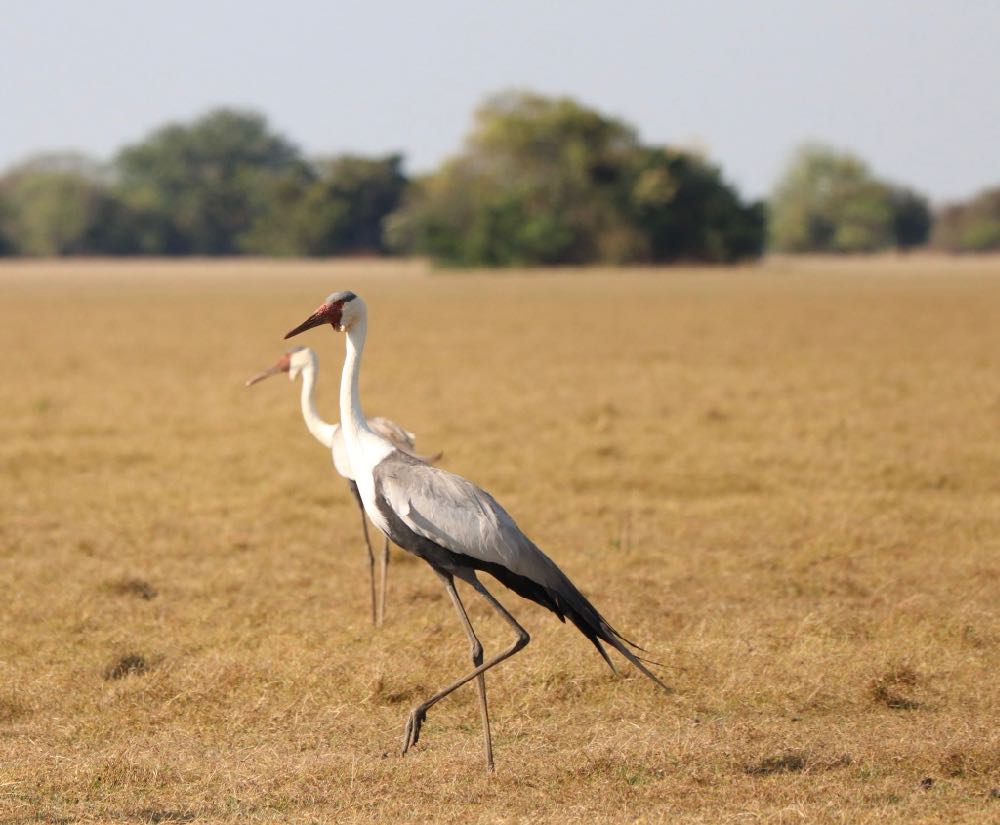 In between game drives, we relaxed in camp, and Pete discovered that his one air shock had probably not been filled – repairs were done – all good and ready to roll again. 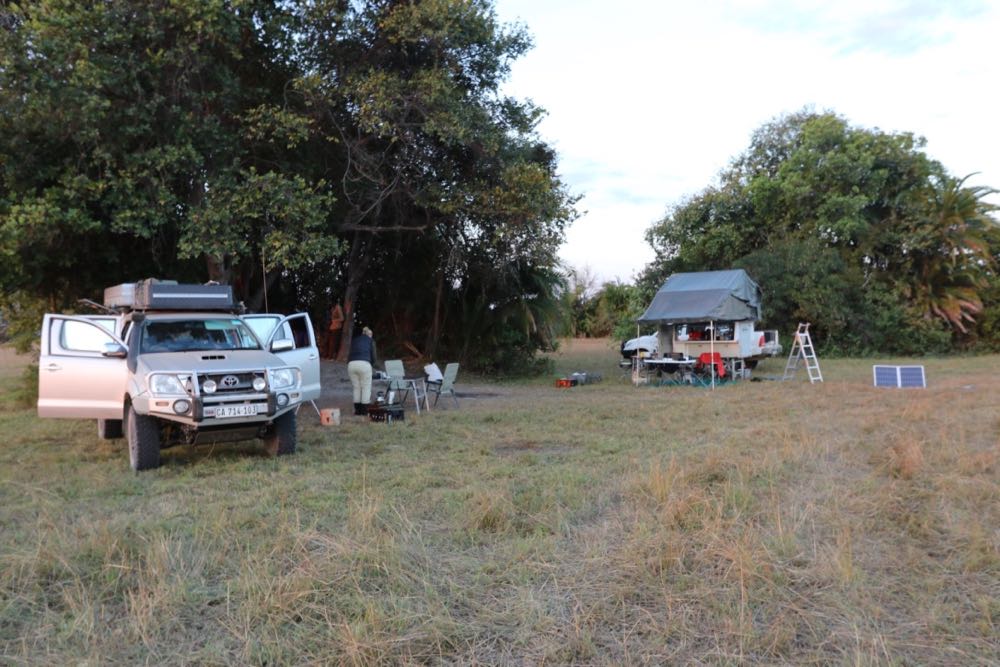 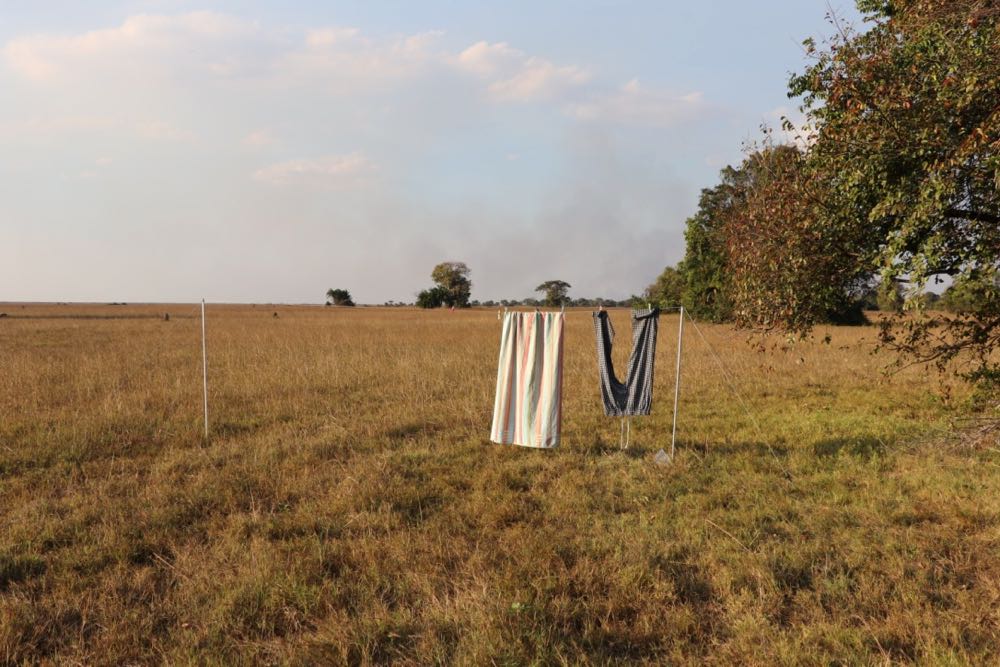 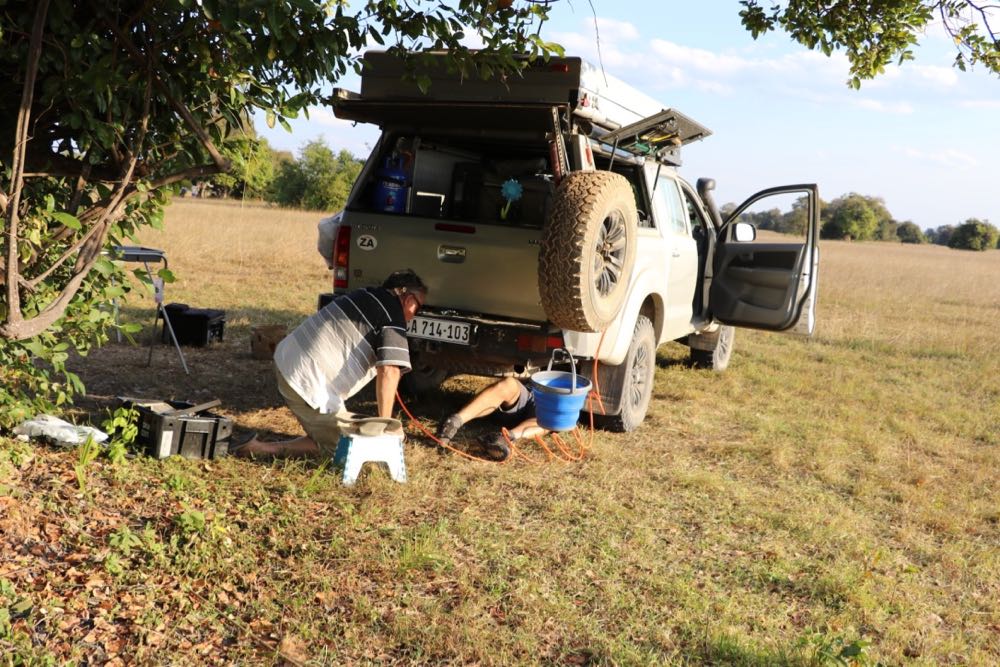 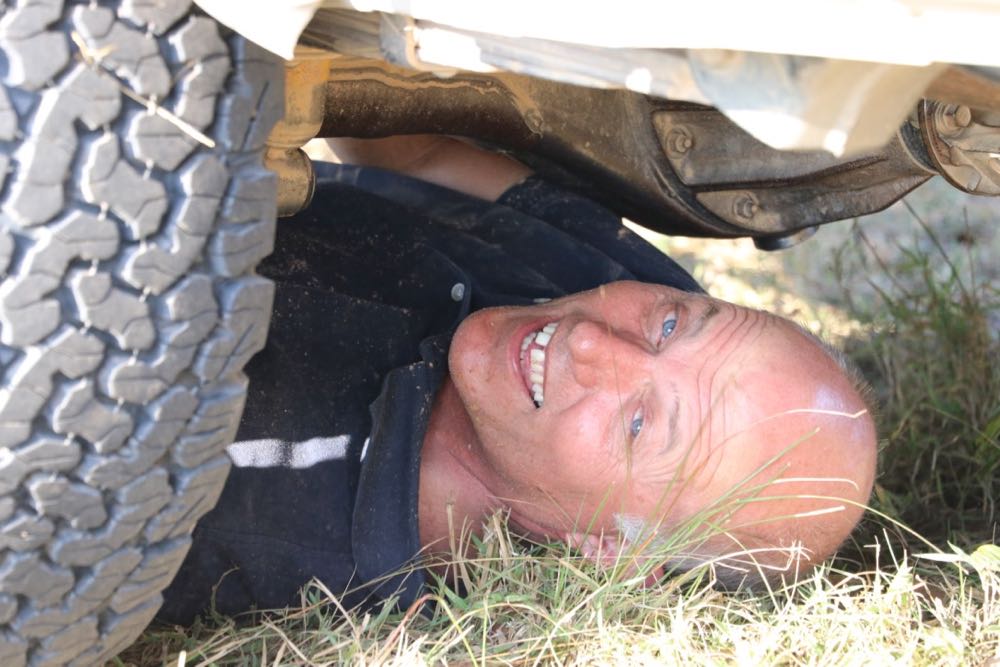 We left Bangweulu by 7:45 as we knew the road was going to be long…it took us 4 hours to drive the approximately 120 km from the campsite back to the Great North Road, back through Lavushi Manda (still nobody collecting park fees). 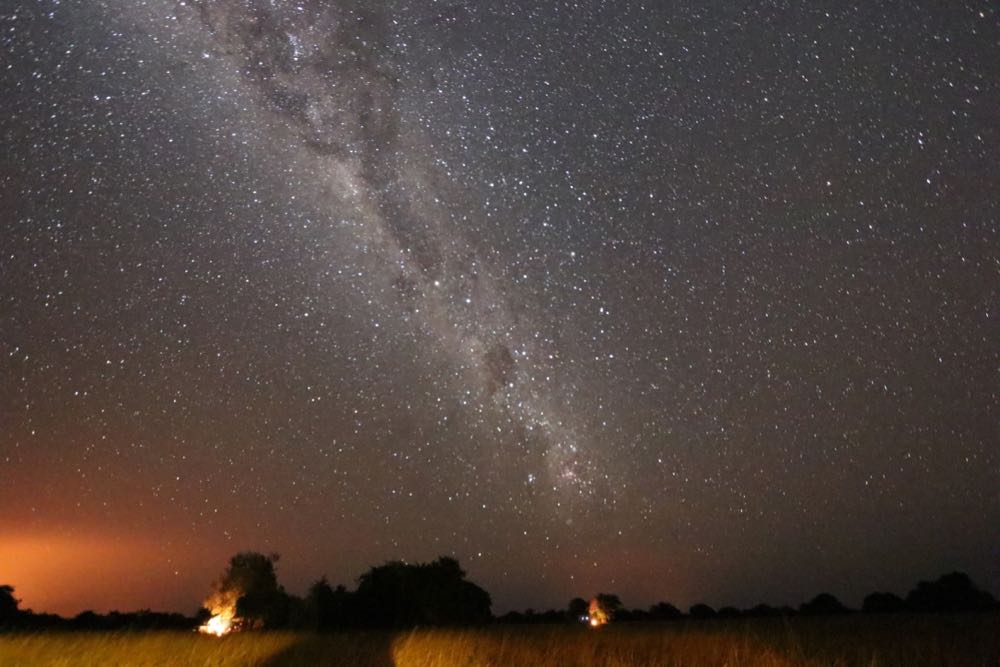