The crew had a reasonably early start for the drive to Kasabushi, which is located in along the Spinal Road in the centre of Kafue. We did not spot much game, partly because we were not driving at a crawl, but also there was not too much to see. Swarms of Tsetse flies followed our car, so taking photos was tricky to say the least – many pics were taken through the windscreen.  Also many illegal fires are set in the park to clear the bush, apparently to make it easier to spot the game!  Never mind the fact that burning means there won’t be grass to graze for a while!! Only the impala and occasionally the puku really like to feed on the new shoots coming up. 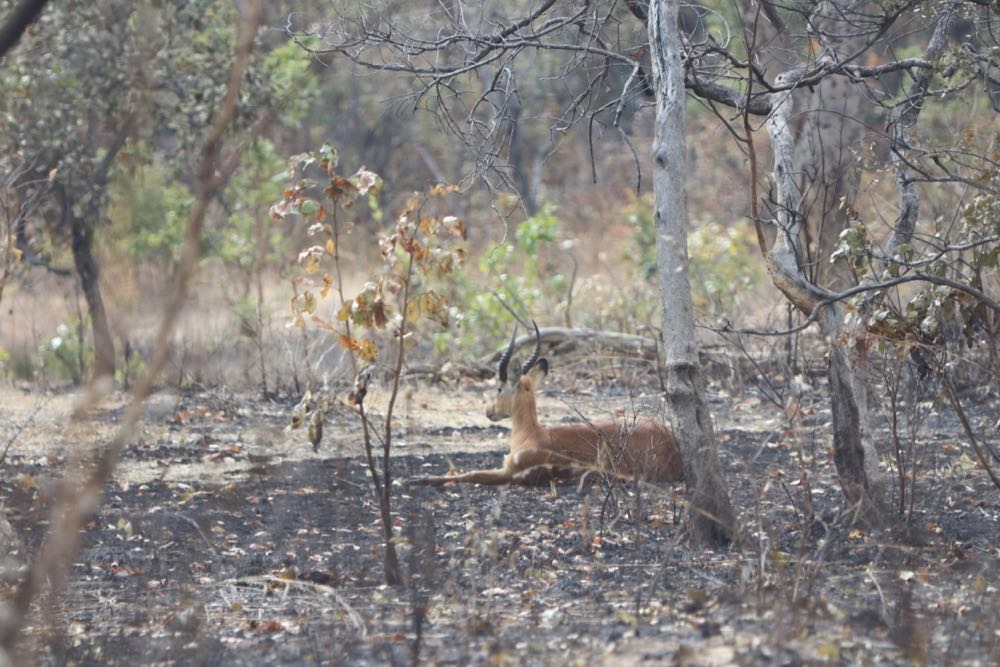 On arrival at Kasabushi camp, there is a post with insect spray and a brave soul has to leave the vehicle and grab the spray to fend off the tag along tstetses….guess who got that job! 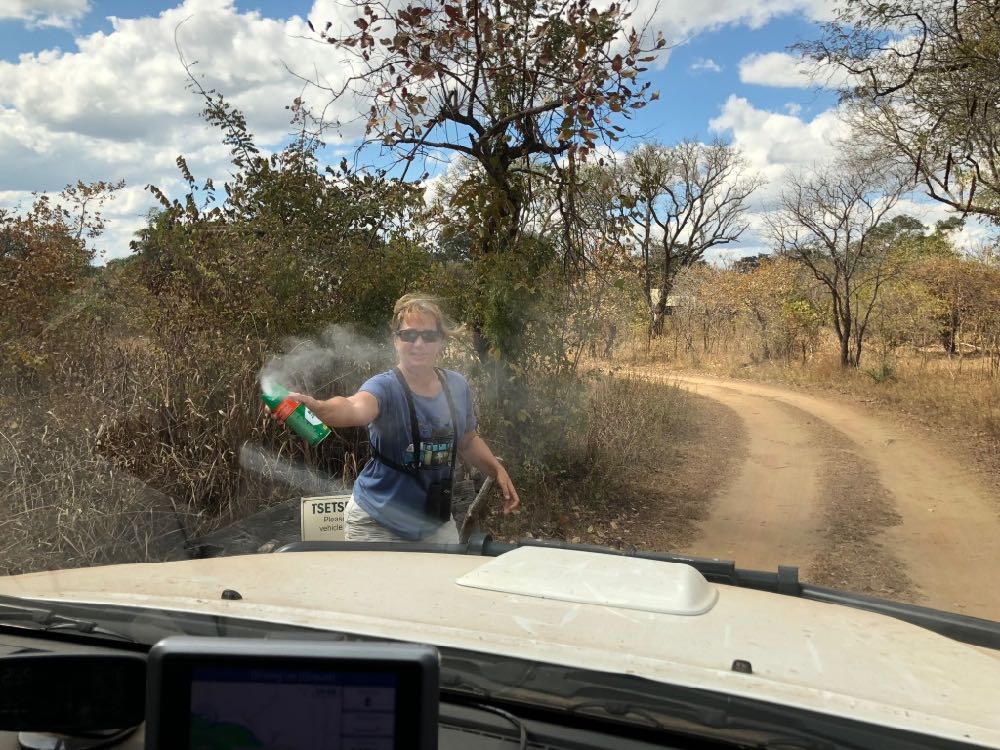 Kasabushi is such a wonderful campsite.  Andy and Libby clearly have poured their heart and soul into developing this spot in the Kafue.  It is situated on the Kafue River, where it braids around islands.  The ablution facilities are creatively built, spotless, and definitely the best shower in Zambia!  It is a waterfall!  There is a lovely walk from the campsite to the lodge area where you see Bohms Bee-eaters flitting from the vines catching insects.

The lodge as a beautiful open sitting/lounge/dining area overlooking the river.  The best bit is a rock pool they have cleared of sand, keep the crocs and hippos out, and circulate the water through a pump to make a natural swimming pool.  Bliss! 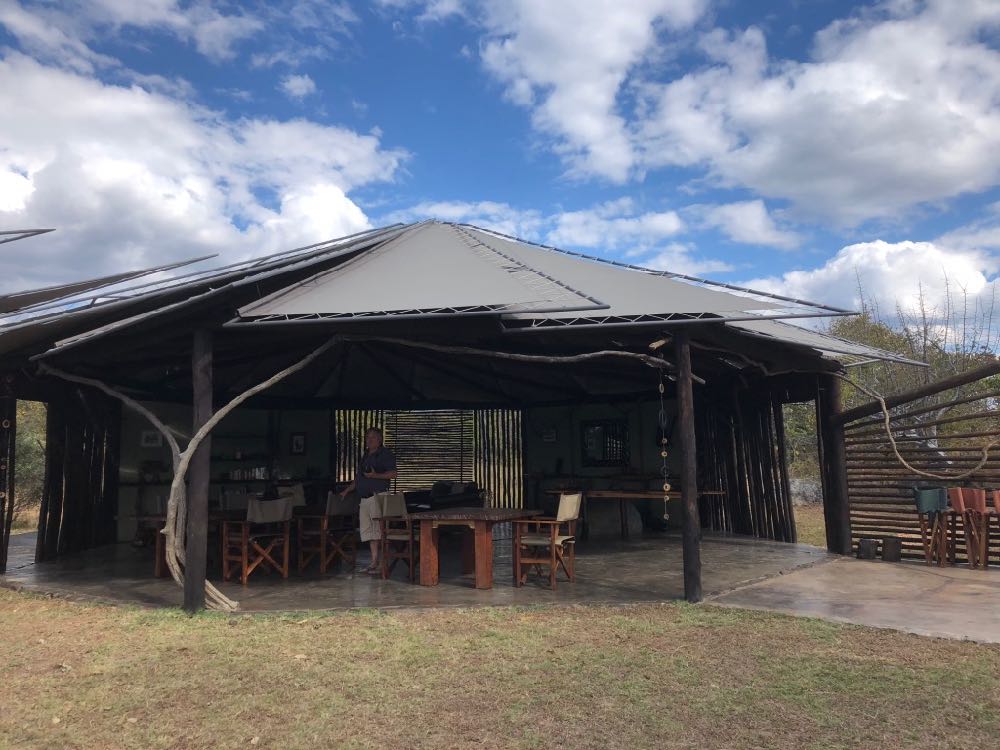 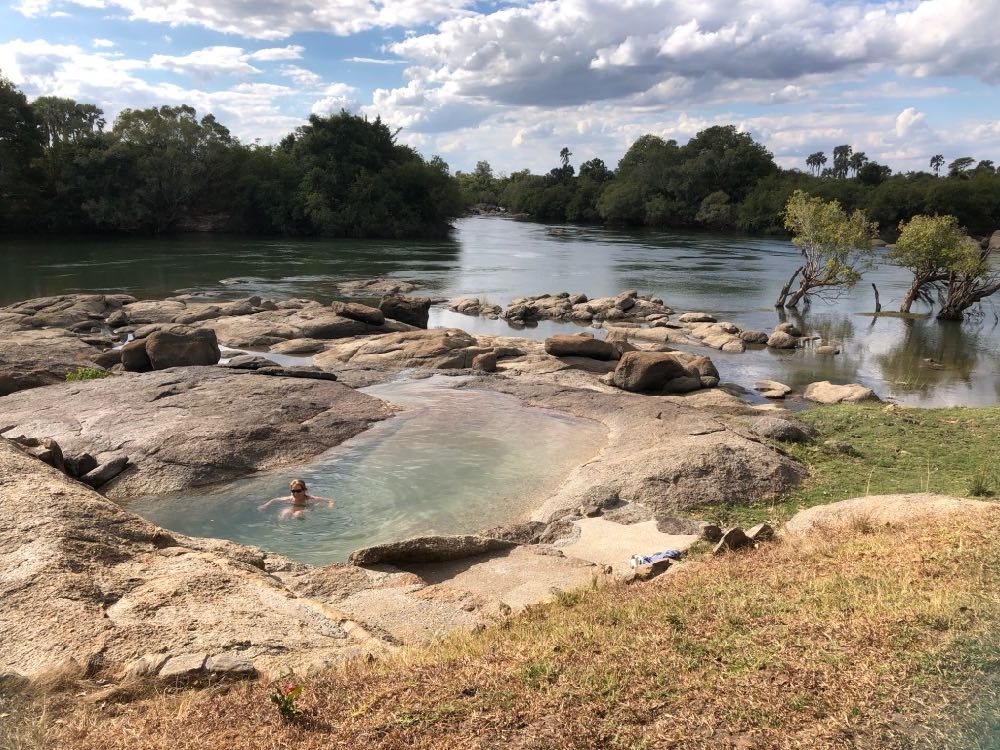 Andy offers a couple of activities – night game drive – we saw civet, gennet, bush baby, hippo, grysbok, puku, impala, hartebeest and the most beautiful starlit sky.  He also offers a morning bush walk and late afternoon boat trip.  The Lambrechts did the walk and enjoyed it, and we all did the boat trip – different nights as the boat can only take 8 people.  We did it on our last afternoon – we first headed downstream – and I got to see my first African Finfoot!!  Happy me. 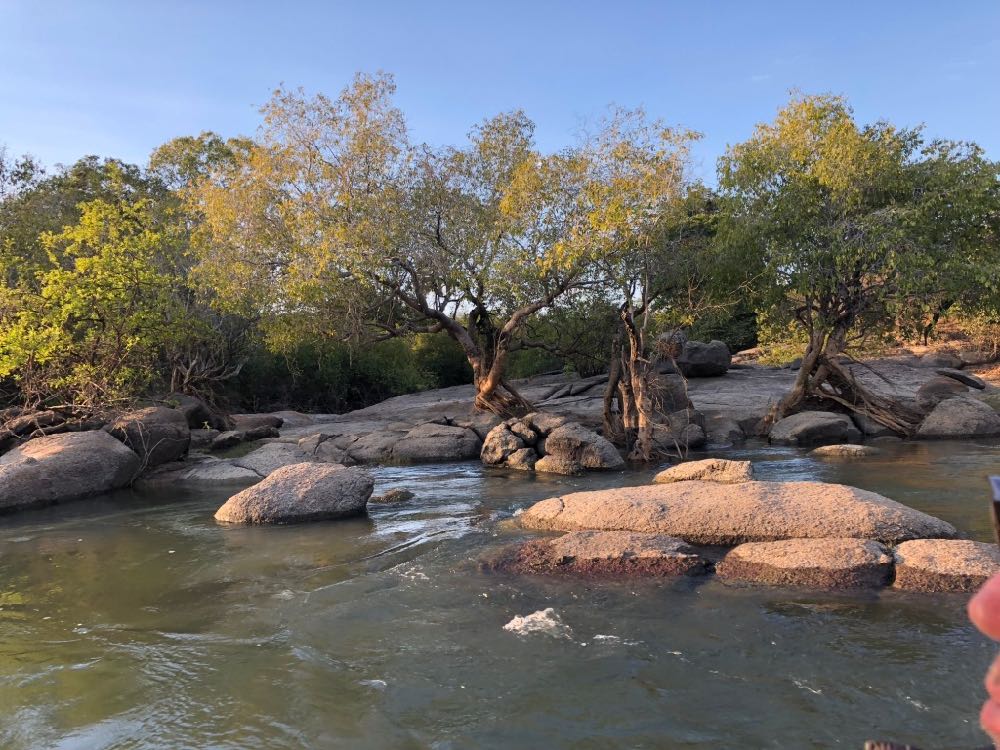 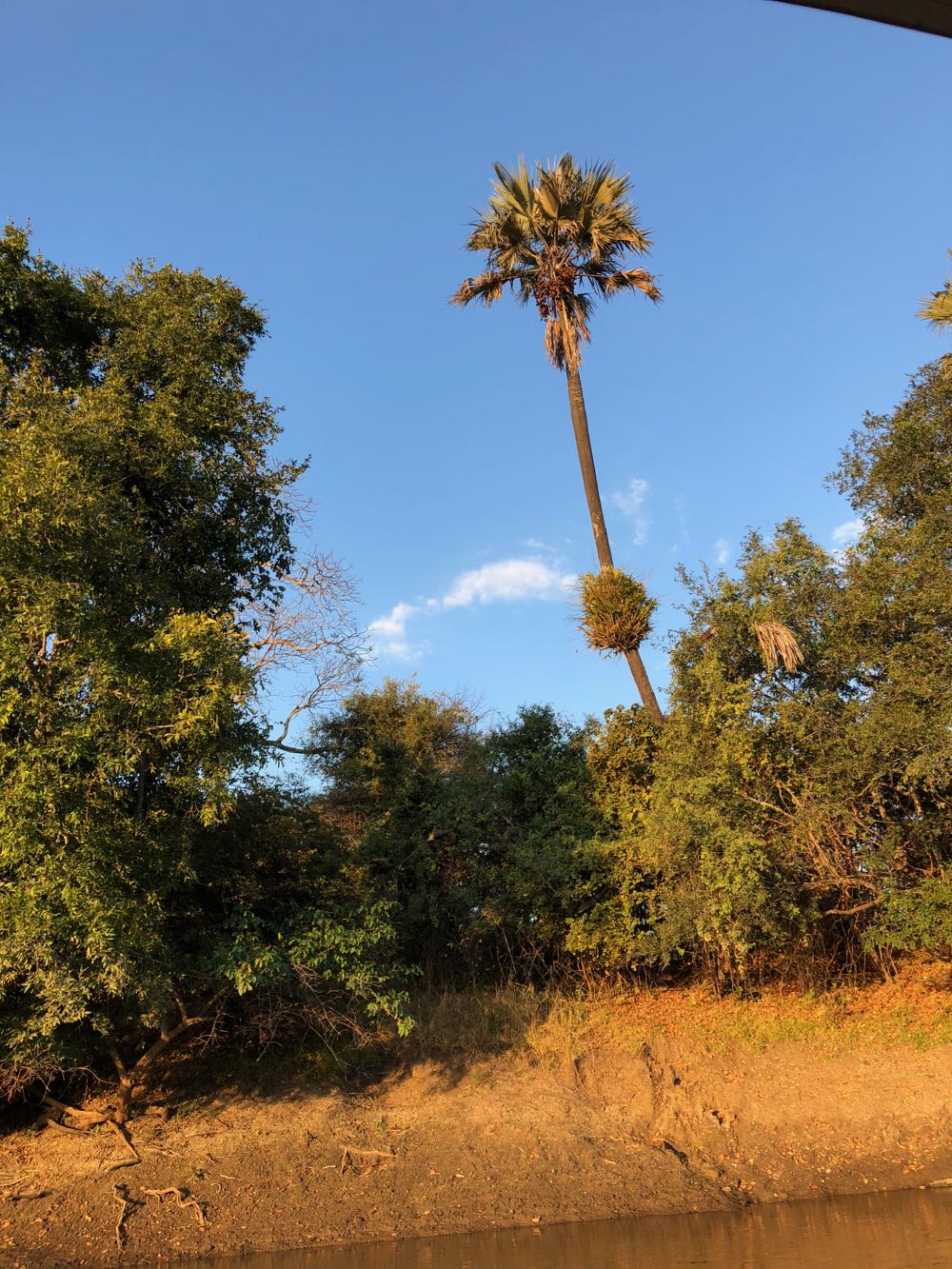 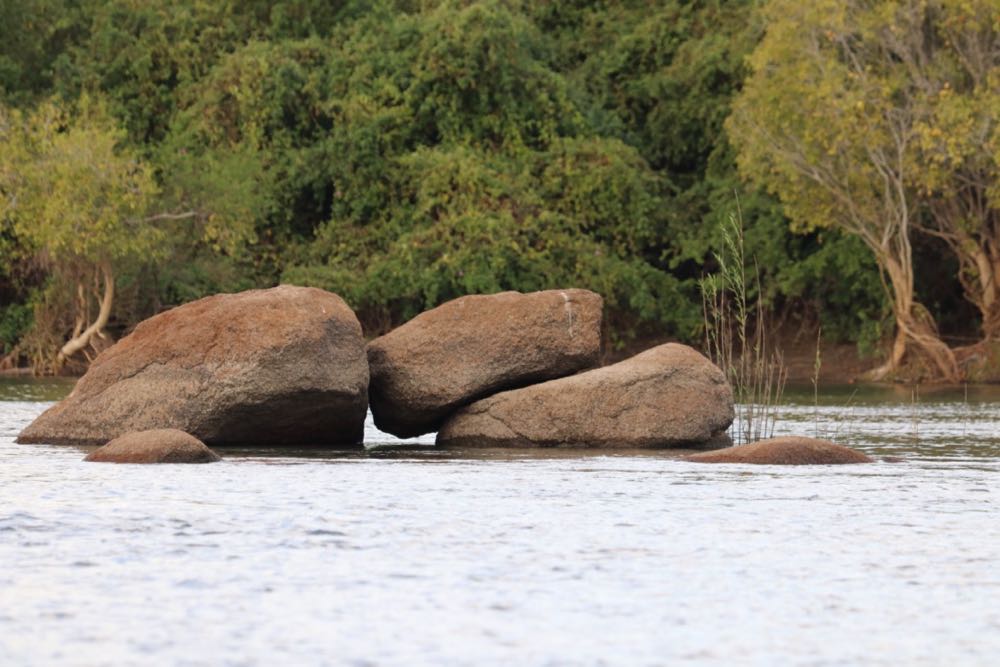 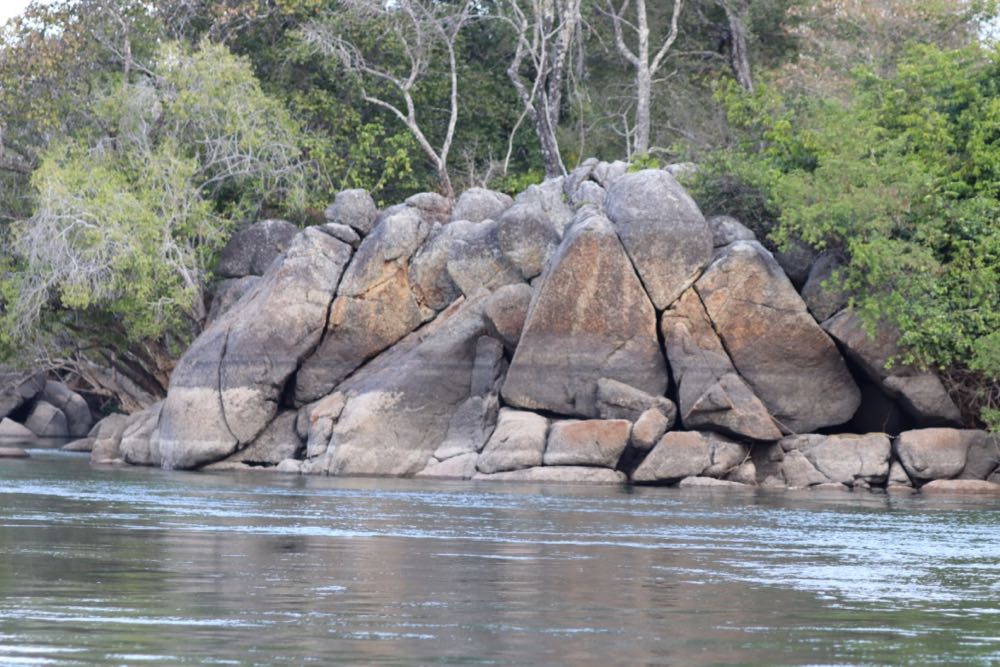 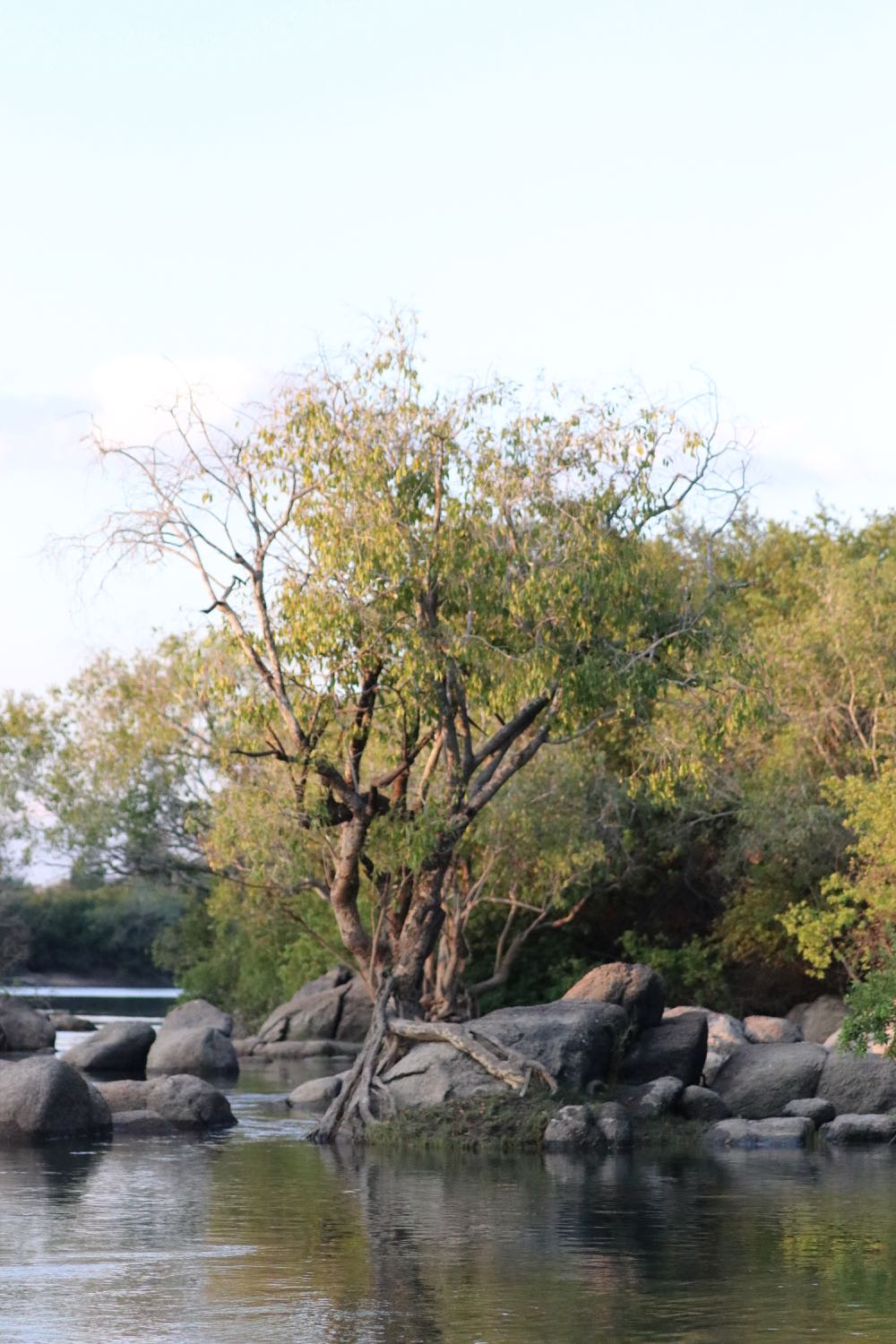 We drifted down the gentle rapids, then headed around an island, now upstream, even through a rapid or two – Andy is definitely skilled at this, and also at keeping the hippos calm and treating them with the respect they deserve!  We watched the sunset from a wide part of the river, surrounded by hippo – just stunning. 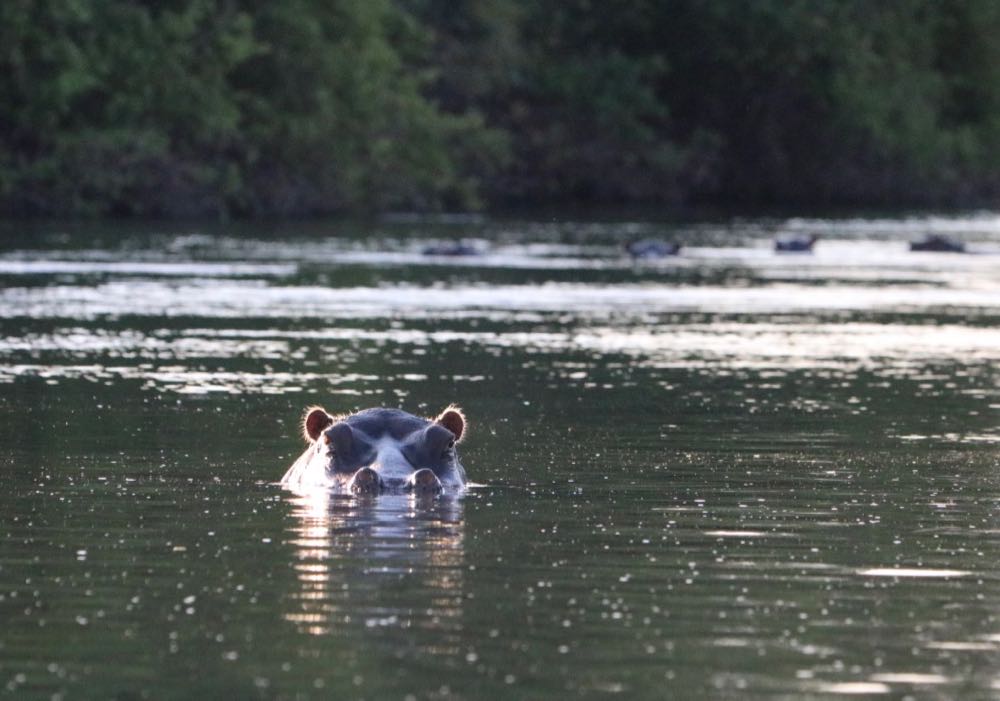 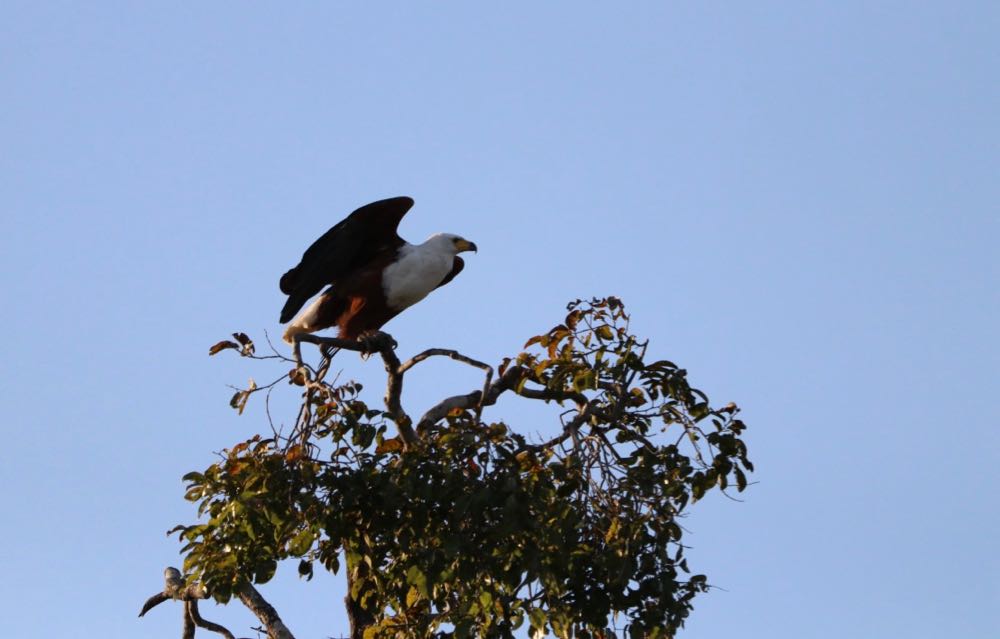 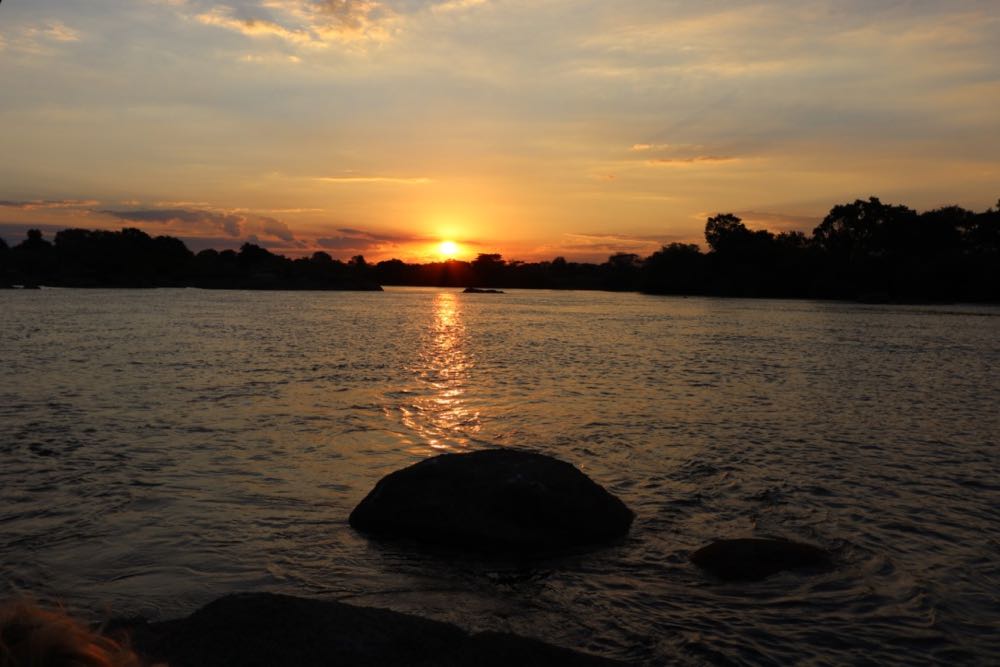 Kasabushi night 2 was the Gie night to host the banquet, so we had marinated chicken pieces (braaied), a cabbage salad, potato bake, and mercifully the De Villers family took on dessert.  Oh, and I made hummus fro the first time in my life…was rather rough as clearly I do not have a blender in Klippie, but it worked.  So we had starters of chips, malba toast, olives and hummus. 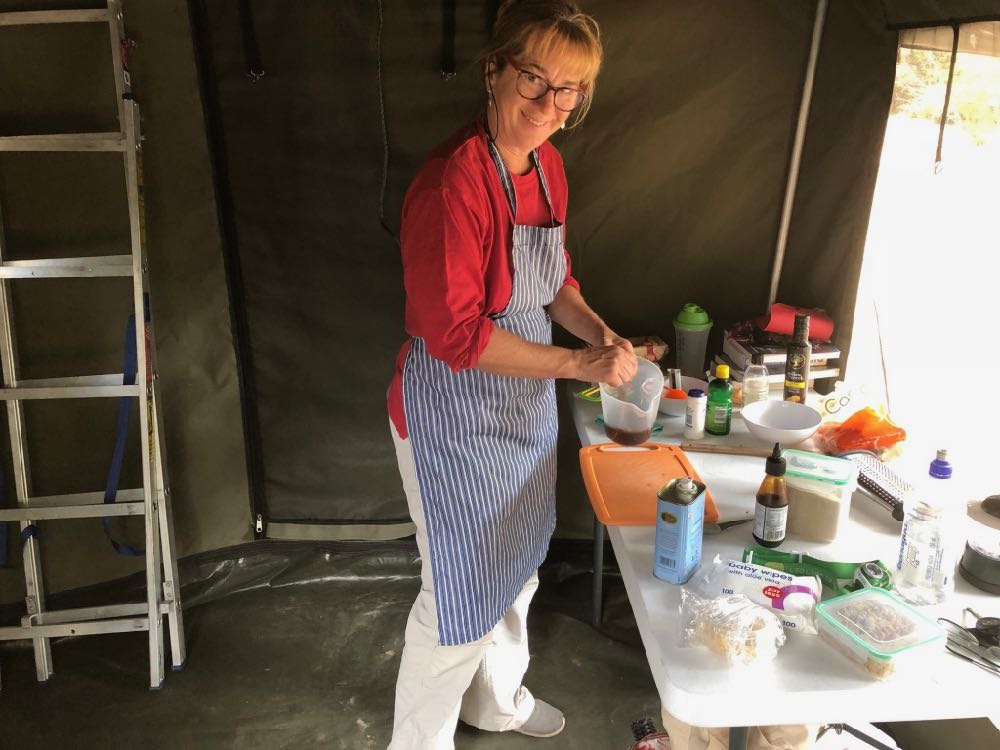 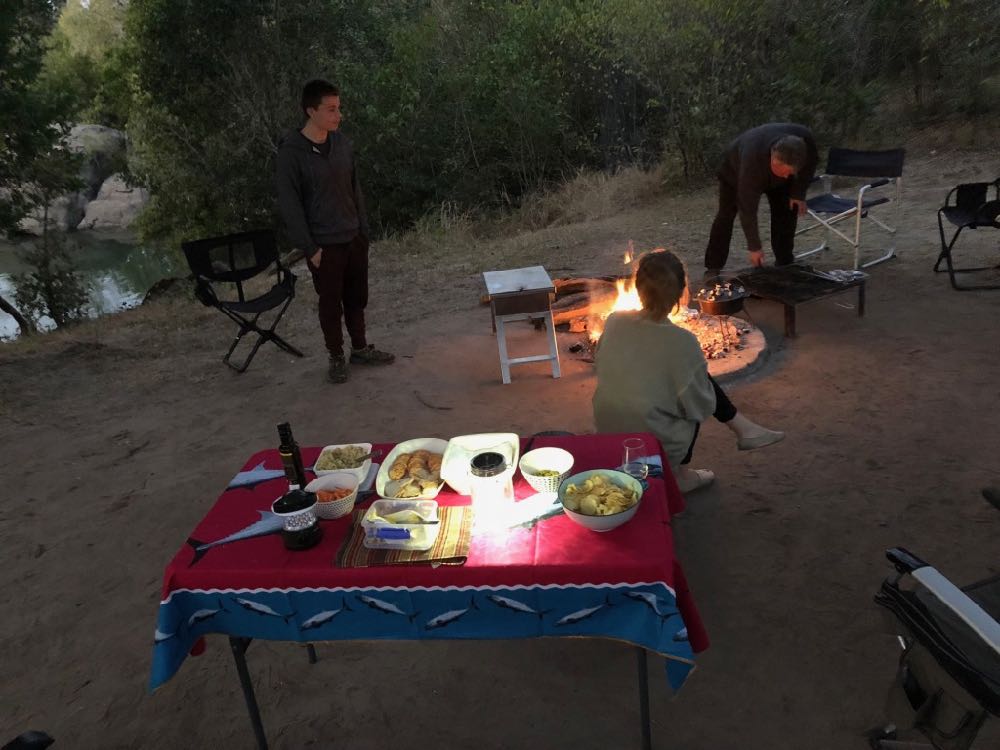 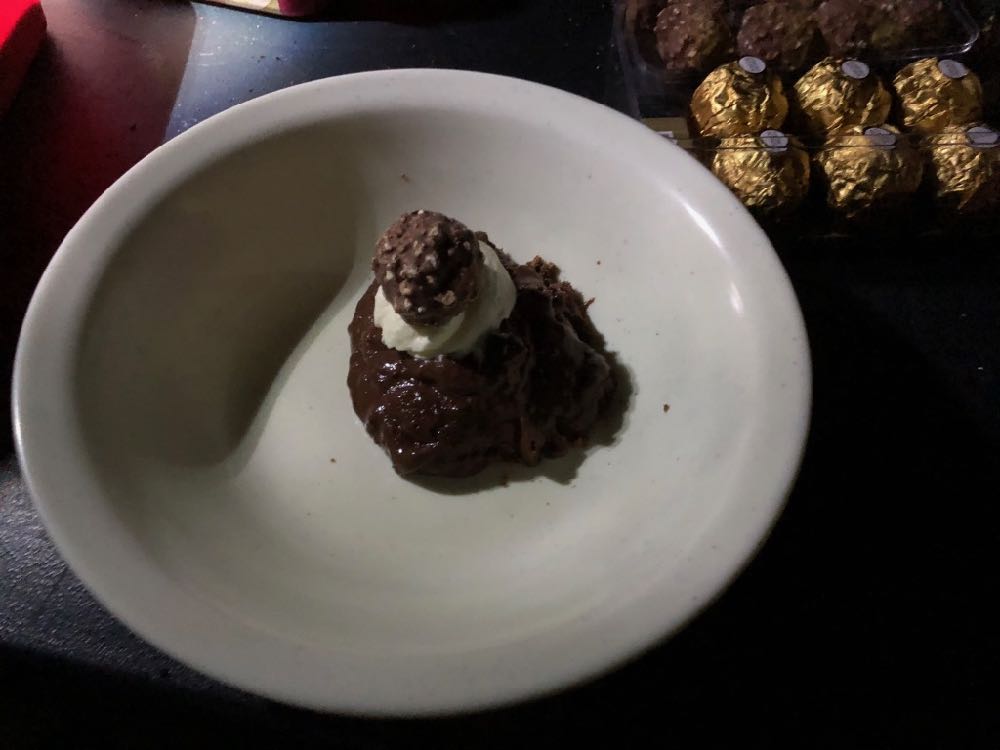 On one of our game drives that Rich and I went on we saw a leopard galloping across an open area – turns out it must have been chasing an oribi, and must have caught it.  Sadly we didn’t see that as the leopard had disappeared into thick bush, but the poor ram stood stock still for about half and hour, staring in the direction of his fallen partner, bleating occasionally. 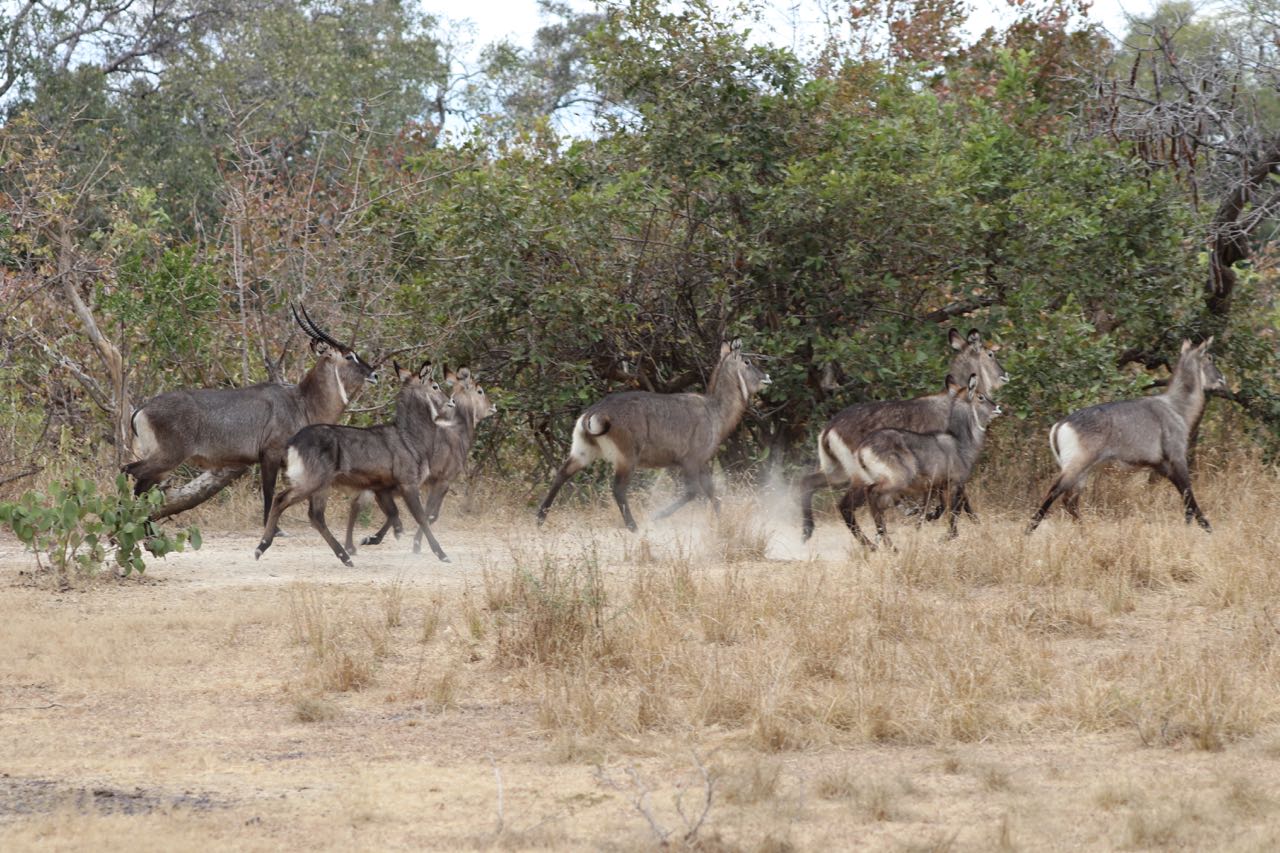