Yesterday we left Nata, and had to drive on the terrible road to Maun – the Tracks4Africa on the GPS said “Drive xkm on Pothole Road” – we laughed, but it made for tiring driving. We reached the turn off to Nxai Pan, and headed from one bad tarred road, to a serious 4X4 sand road. At the Reception Office, we paid the difference in camping fees (we had changed our booking dates and decided to spend a night at Baines Baobabs), and we could pay the Park Fees at the reception. We were given directions – no maps to be had, but I photographed their laminated one, and off we slid and bounced along the main track heading north. 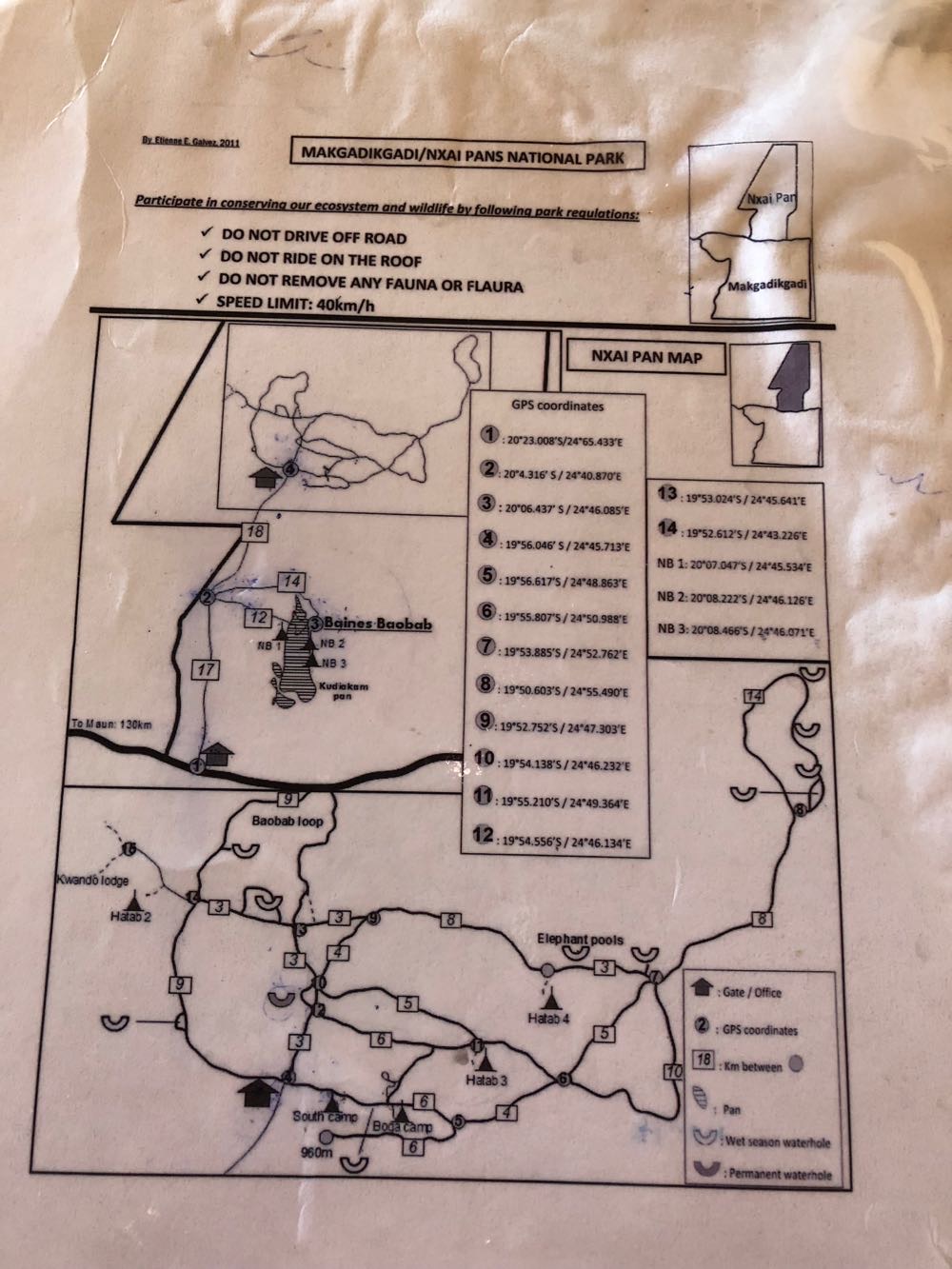 We let the some air out of the tyres, which made thins marginally better, but Richard still had quite a time of it with our heavy vehicle and my nerves.

At last we got to the turn off towards the Kudiakam Pan. This track was fine for most of the way. The veld is Kalahari like, with occasional clumps of trees, and occasional palm trees – this whole area used to be covered with water thousands of years ago – it is flat and the tall grasses stretch for miles before one. We spotted some zebra and ostrich, lots of little brown birds that escaped my binoculars and camera lens. Drawing closer we say the famous clump of baobabs, painted by Thomas Bain around 1860ish, on the edge of the enormous Kudiakam pan. 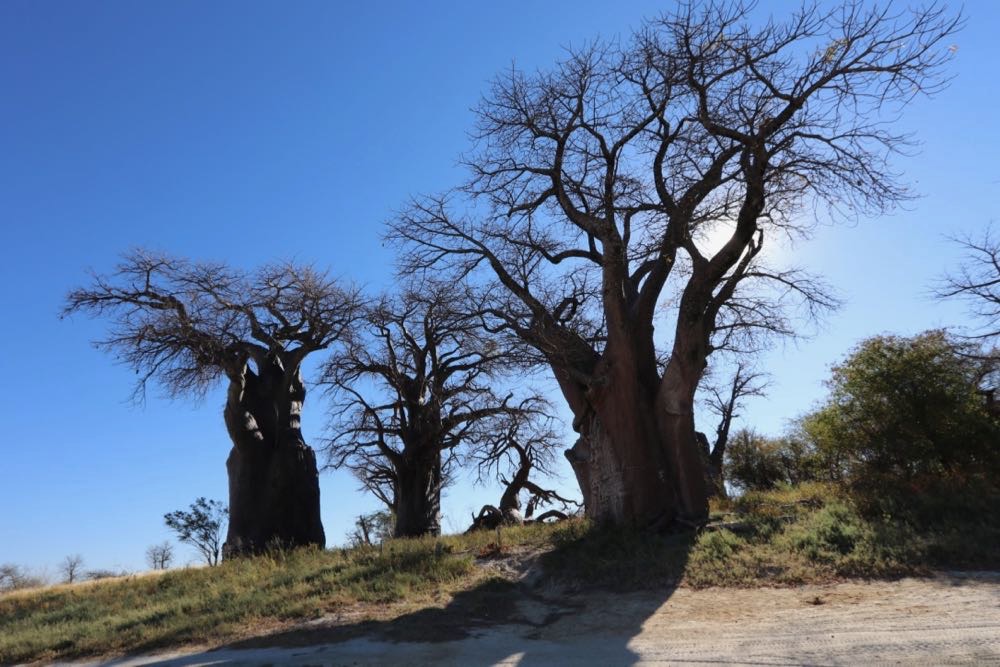 The baobabs are quite spectacular as they stand out in this flat, harsh wilderness, like sentinels on the edge of the pan. 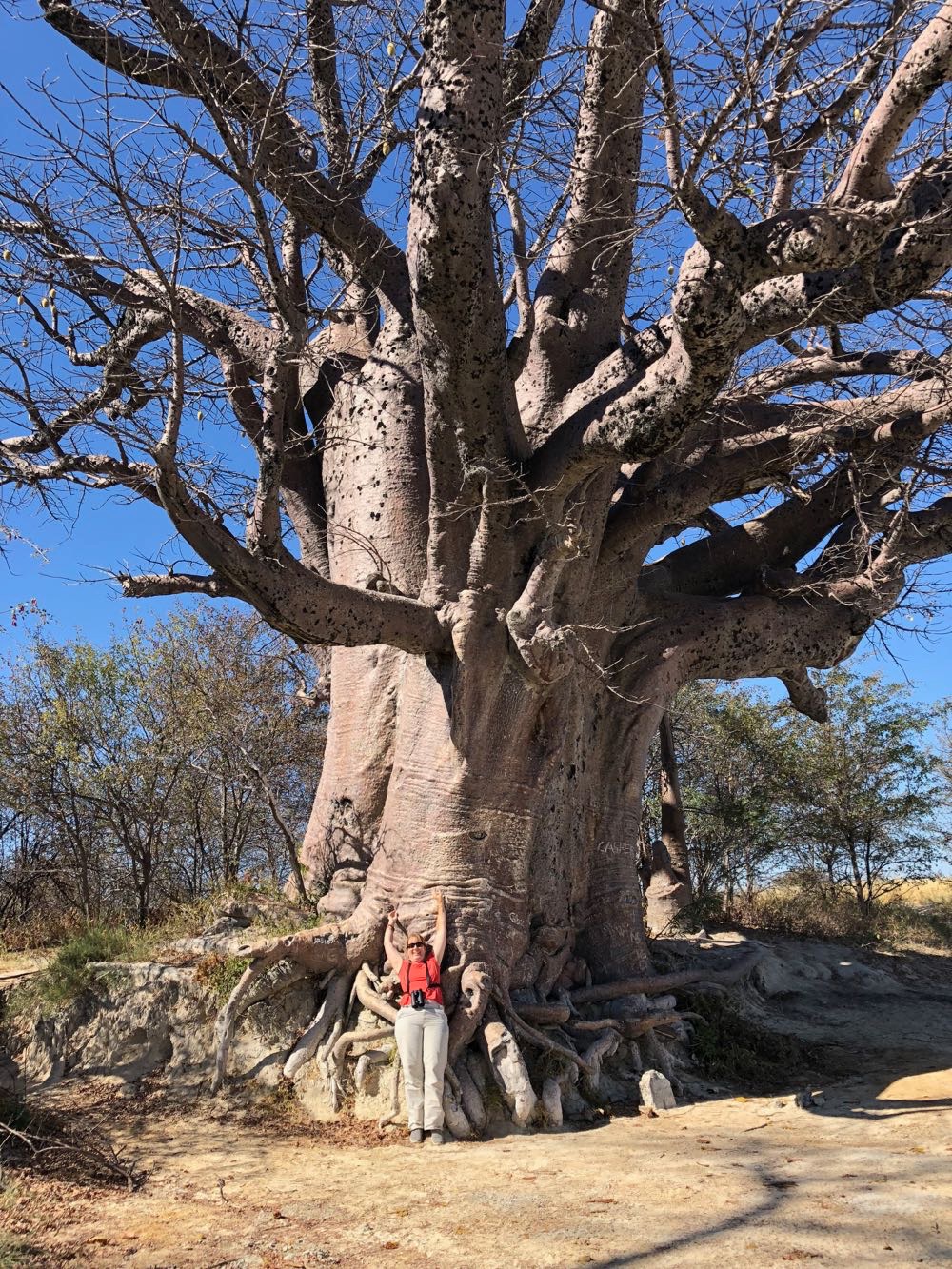 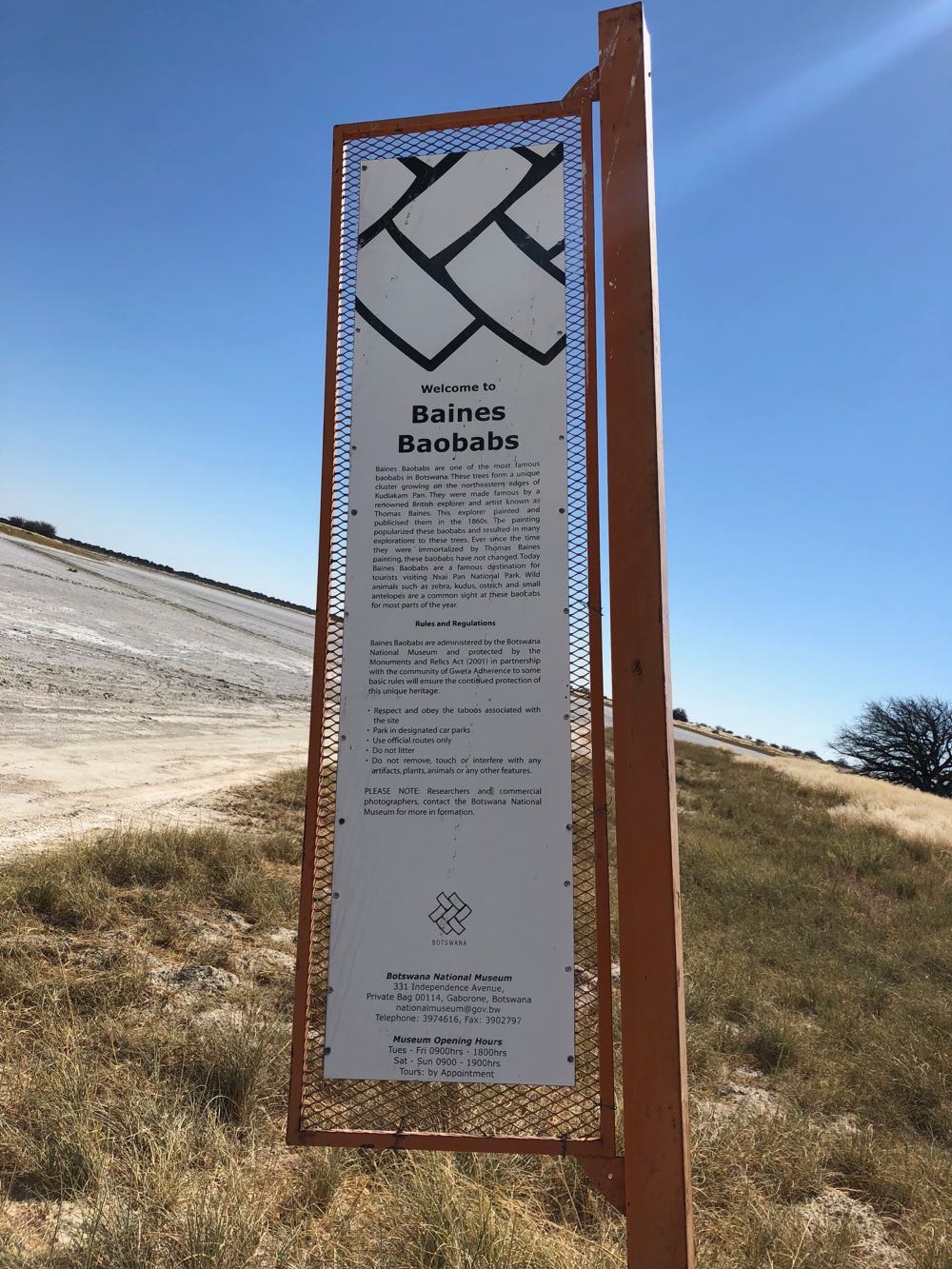 The pan is dry currently, with the upper salty crust cracked and slightly curled. 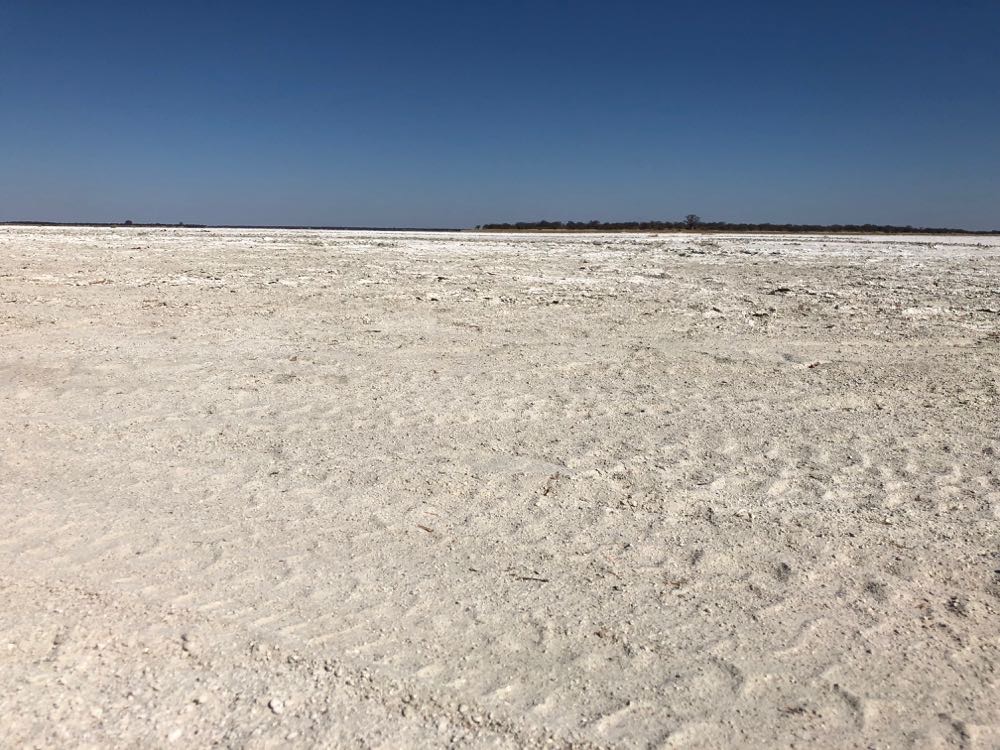 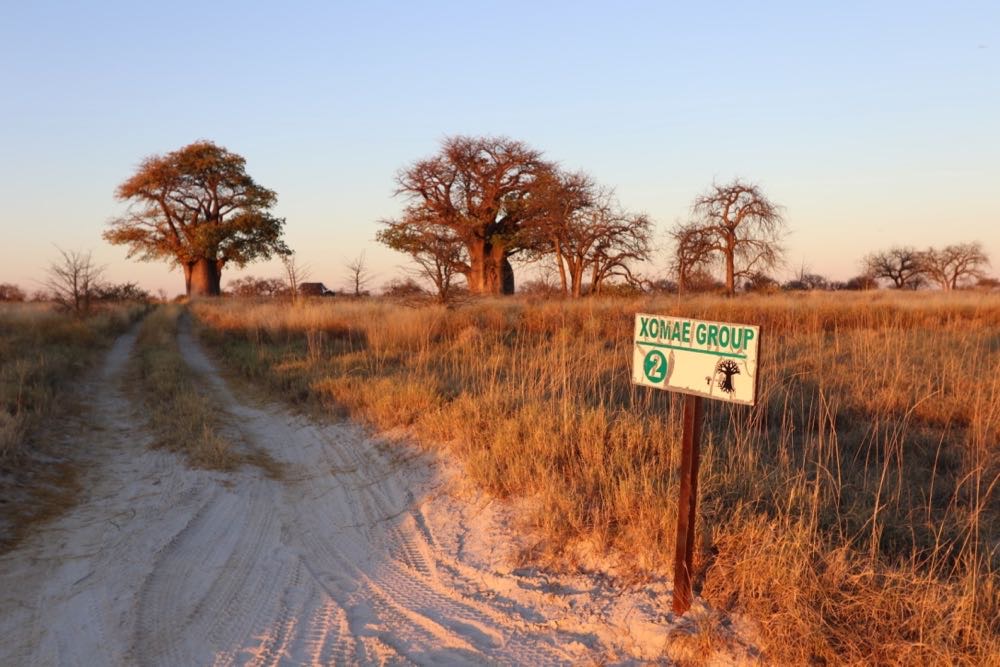 They are very basic but with a long drop loo on a concrete plinth– complete with a proper toilet roll holder and toilet paper supplied! There is also a separate bucket shower area – also neat and clean. We were allocated Campsite 3, but when we got there found it was already occupied by a herd of Namibians in enormous RVs. The site had clearly been double booked, so we headed back to Campsite 2, which is open, on the edge of the pan, but 3 baobabs provide some shade. 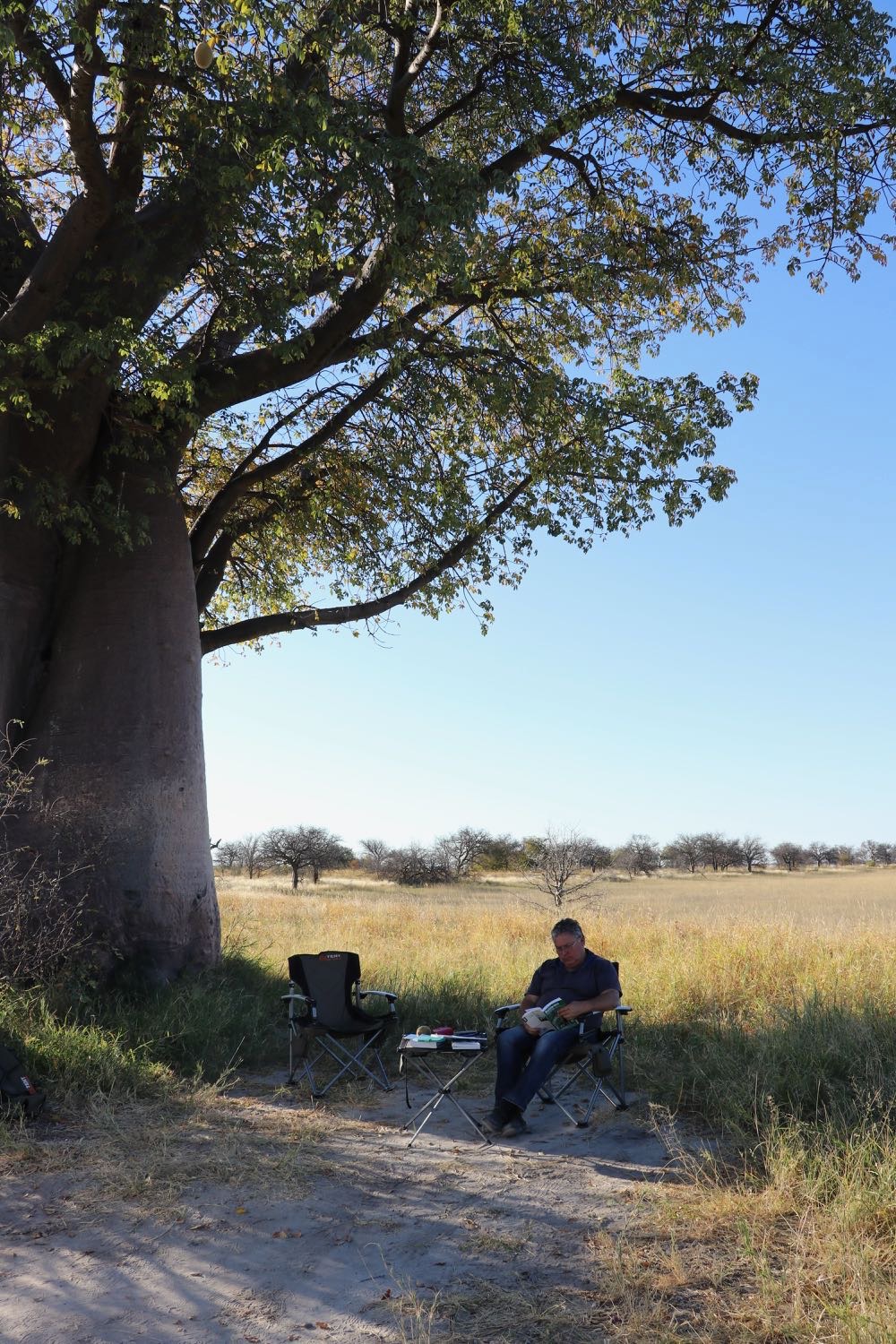 We had a late lunch snack under our baobab whose leaves were gently raining down on us, and then Richard tackled rescuing the car battery – our first repair of the trip. The corrugations, potholes and other bumps over the last 4 weeks caused one of the bolts holding the battery in place to wear a whole through the metal of the car, causing the battery to become loose and rattle around a bit. Repair done, and we set up our rood top tent, lit the fire, and took our chairs to the edge of the pan to watch the sun set over the pan. 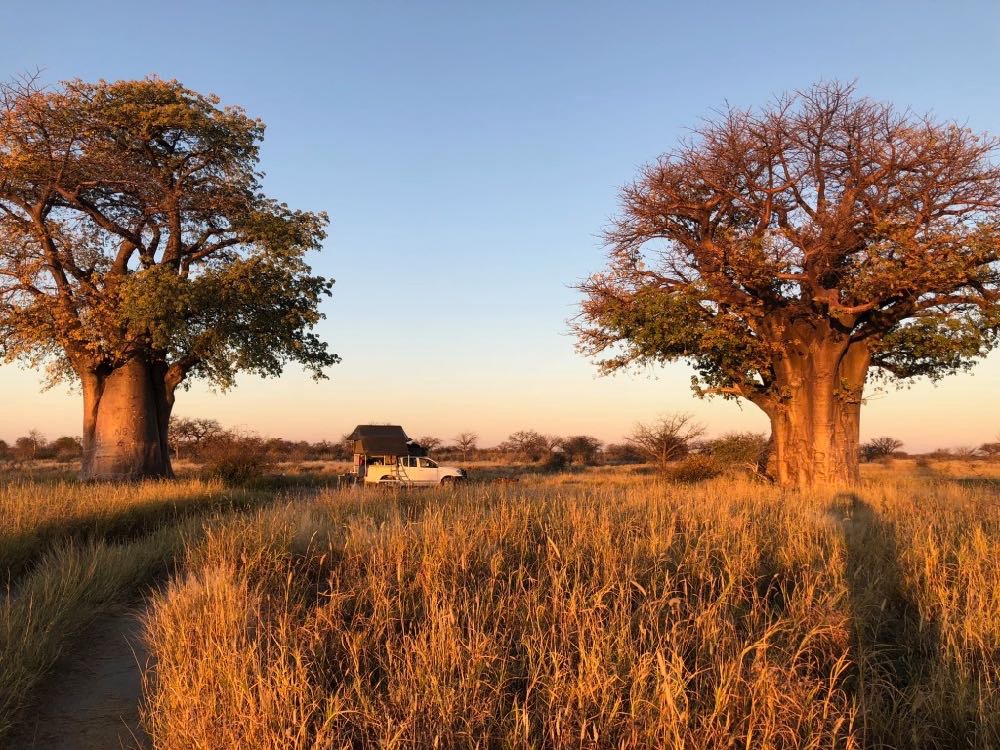 Absolute silence, amazing colours and contrasts – quite a sight to behold. 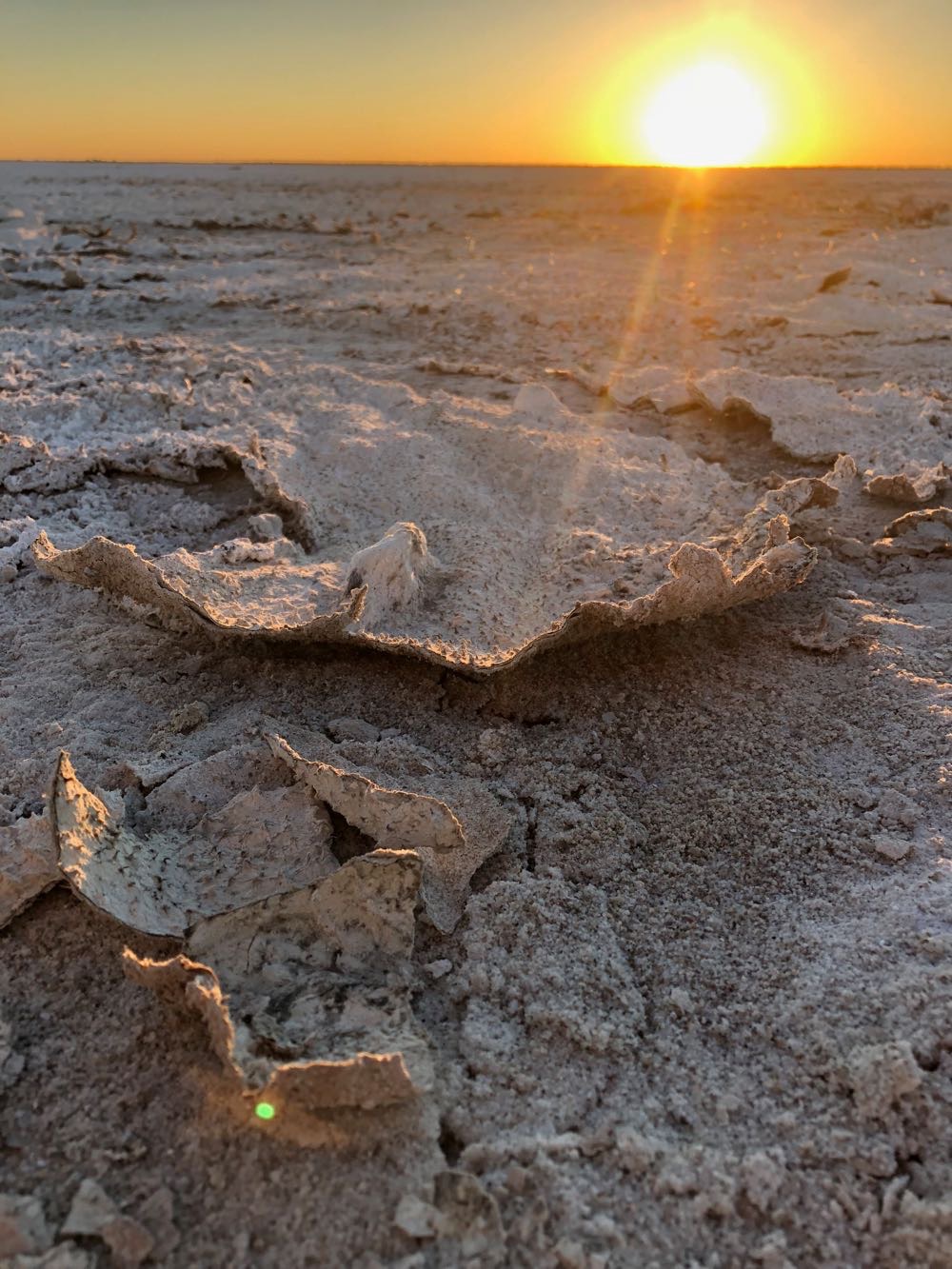 Back to the car to put on layers of clothing as the temperature started dropping. As soon as we had eaten, washed up, we headed to bed in our cosy little rooftop tent. Well, I got warm and cosy, while Richard took some night photos of the stars – a day or two after new moon, so the milky way with no light pollution is truly awesome. Great photos. 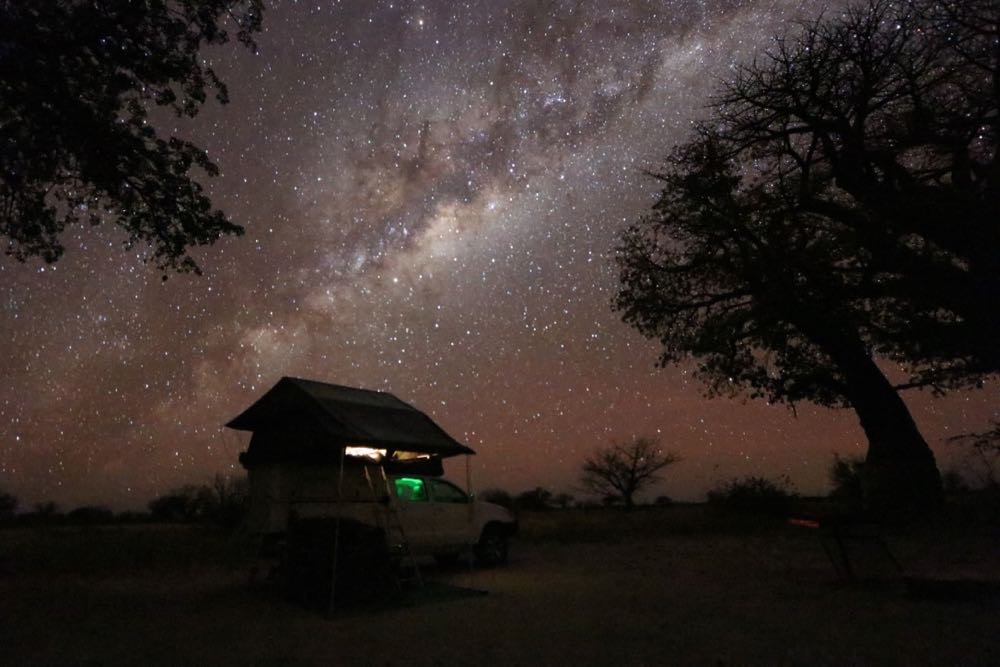 I woke up with the birds, and lay in bed lazily for a while – much warmer under the duvet than outside. Call for tea and a comfort break got me up, and oh my word, that morning light over the pan and then the grassveld. We packed up camp, drove back past the baobabs and headed to South Camp – which meant back onto the bone-jarring, fat-wobbling, teeth-chattering, slidy sandy road. Got to the entrance to South Camp, checked in at the reception – helped by Michael, and then popped in to the famous tuck-shop – I had read about this, and it is truly an amazing little shop – bought a reasonable bottle of wine, some beers, and some wood for the braai. They also sell ice!

Off to find our campsite – there are 10 sites located under trees, each with a braai area. The well built ablution blocks are spotlessly clean, and have been made elephant proof – I have seen similar ideas in other parts of Botswana a few years ago; the elephants try to get to the water pipes, so they need to be kept at bay. We set up camp properly – so Klippie is in her own grove of trees. 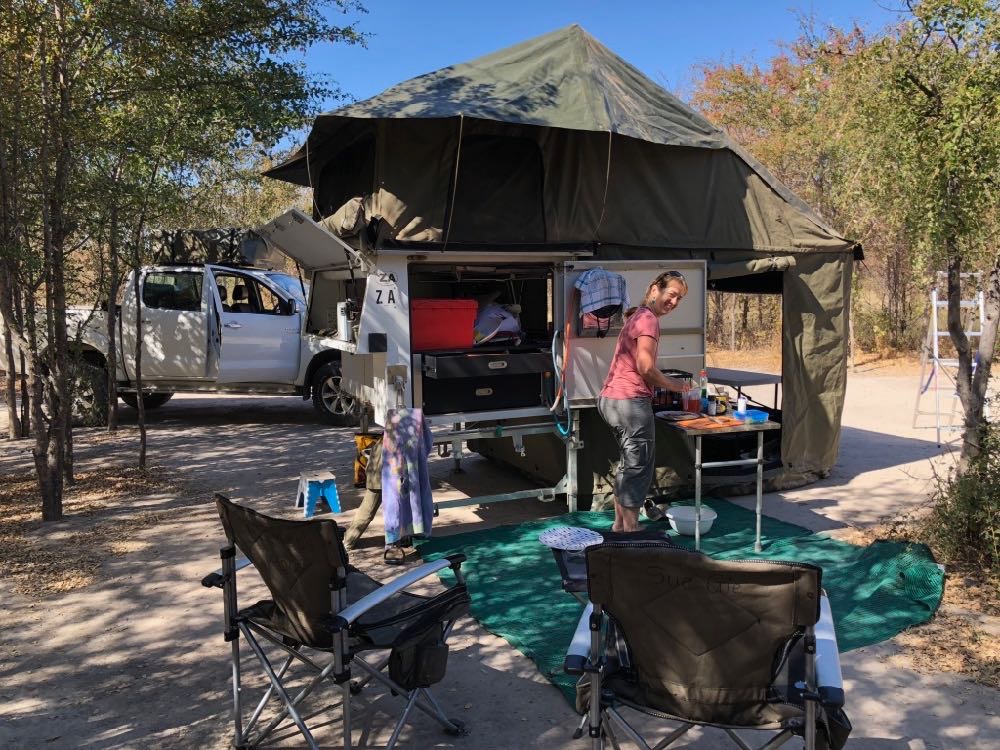 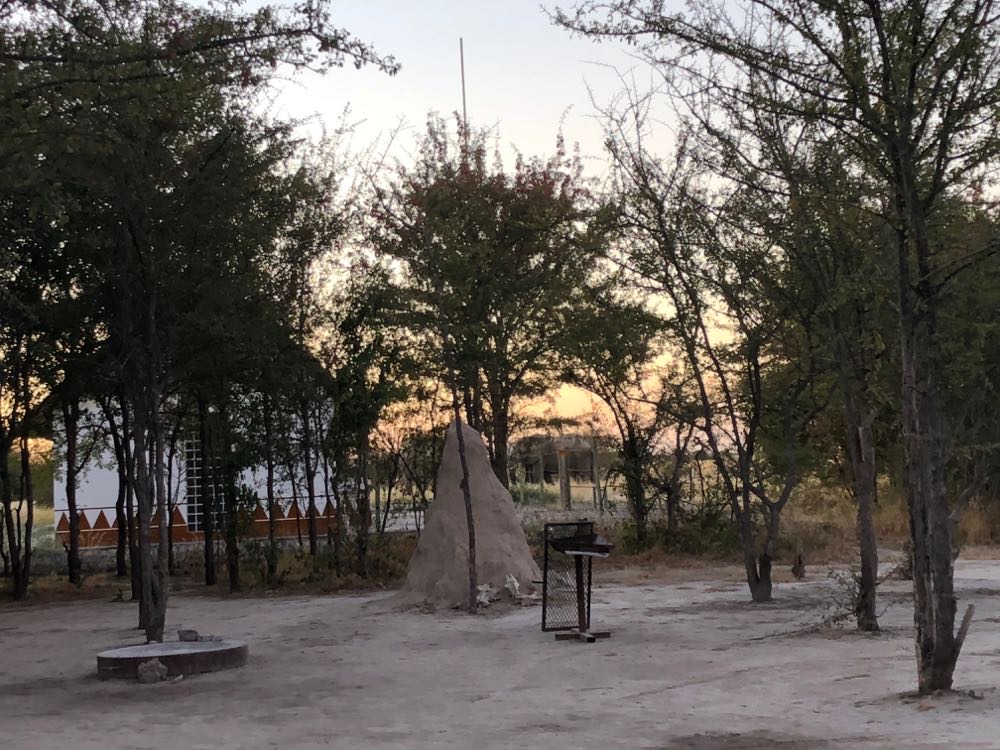 Light lunch and a relax, before we headed to the nearby waterhole for a game drive. Saw elephant, springbok, and some interesting birds. 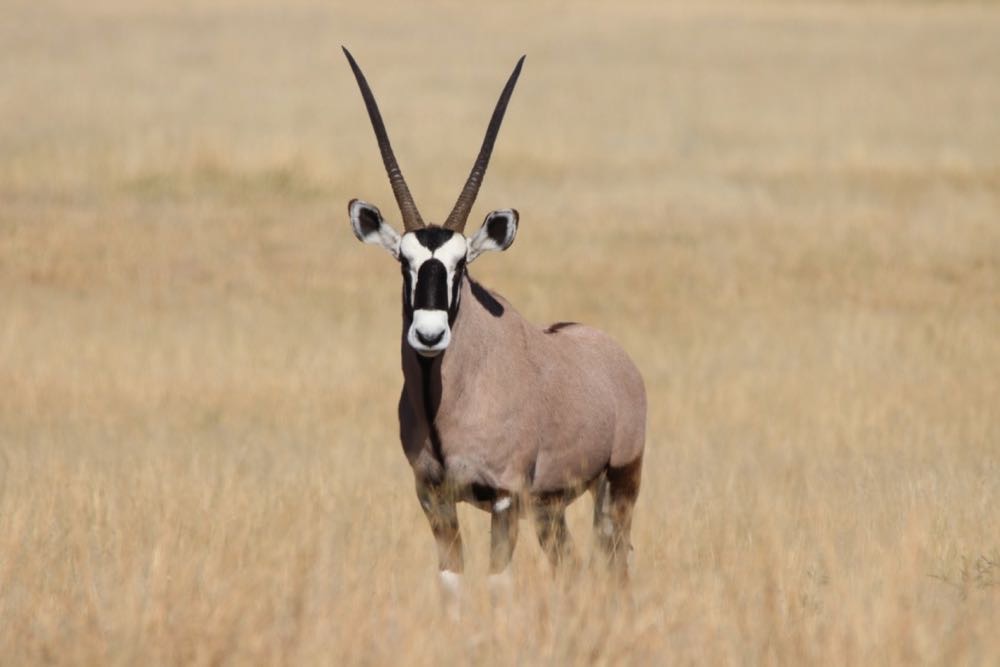 We weren’t in the mood to sit and wait at the waterhole, so we headed back to camp for a shower (it was cold, sadly). We enjoyed braaied chipolata sausages, Smash and tinned peas – camp food, but actually delicious. Rich made a stewed apple for us each for desert. While the sun was setting a group of 3 elephant we had seen around mooched through the camp and hung around outside the ablution block for a while. Just before our supper was ready, we could hear, but couldn’t see one (it was pitch dark) munching away no more than 20m away from us in the trees – could clearly hear it’s tummy rumbles. 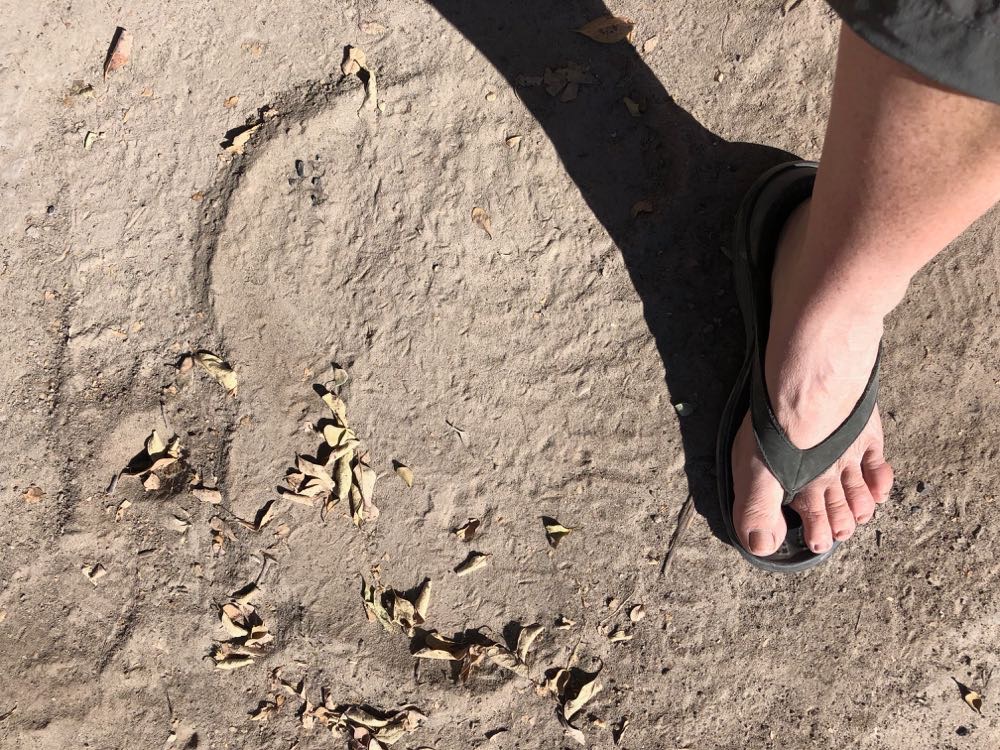 The next day we felt lazy and spent the day in the camp, pottering, repacking, sorting and trying out different boma arrangements. We probably missed out on sightings, but we did not feel like being in the car anymore!

Next morning up with the sunrise, pack up, and off to Kasane…NOT camping ? 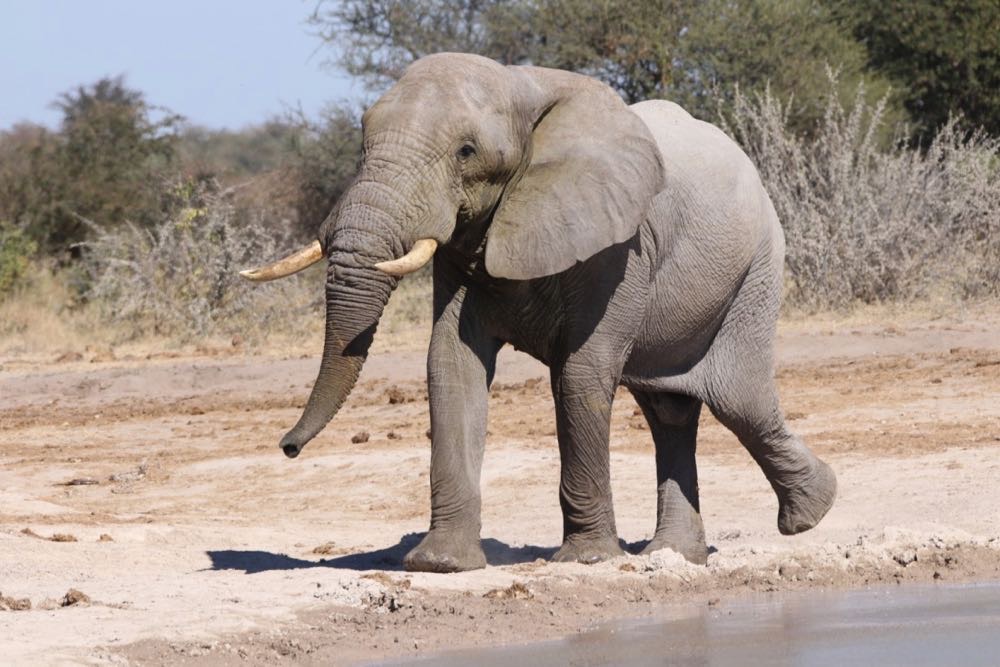