The day started at Crocodile Bridge Rest Camp with tea, shower, and packing Klippie, while watching an elephant saunter by, have a back scratch on a tree, before disappearing down to the river. A family of banded mongoose made incredible efforts to raid the bins next to the braai areas, while a family of bushbuck grazed around the camp. Gies and Holloway’s all packed, up to the office to check in for the trail, meet our guide, Johan, who gave us our briefing and we were on our way.

The trail basically starts at the southern end of KNP, follows the Lebombo Mountains, and end at Crook’s corner, Pafuri. Johan told us that Lebombo means mountain, Lebombo Mountains there is mountain mountains. We drove the back roads not accessible to the general public, which require basic 4×4 skills. Beautiful scenery as one climbs up the range. We wound our way up to a viewpoint overlooking the Komatiepoort border town, and spent most of the rest of the day hugging the Mozambique border. An impressive fence has been erected to try to stem the poaching problem from Mozambique. 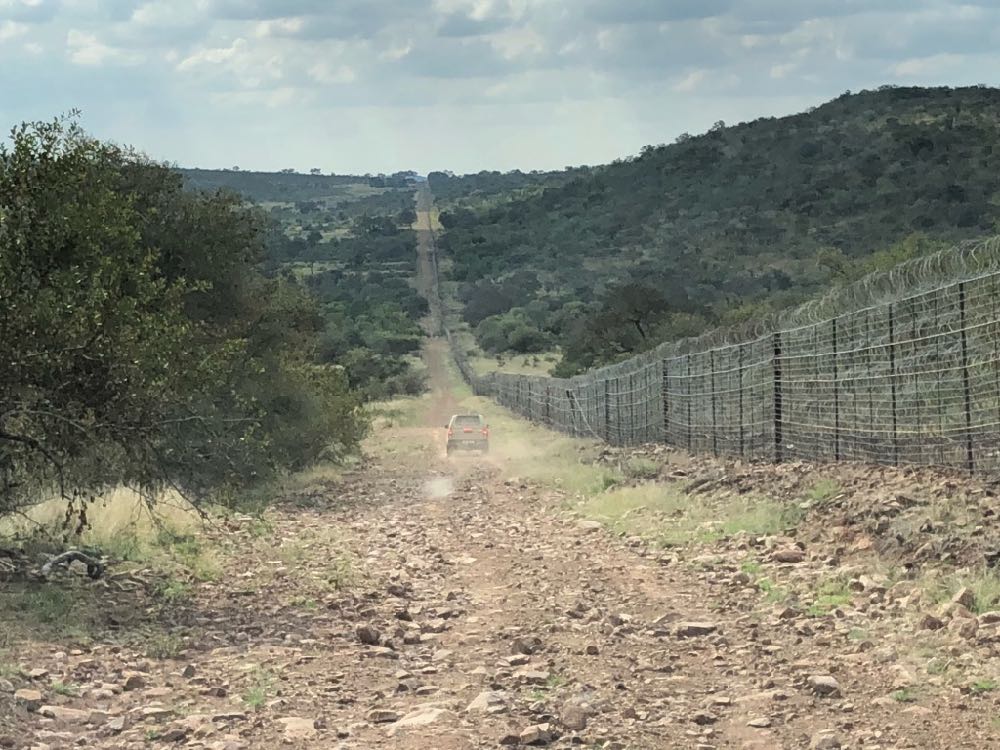 The fence did exist but has been fixed and upgraded for about half the length of the park, with upgrading of the rest in the pipeline. We stopped at a viewpoint overlooking the Sabie River for lunch, where it flows into the …. dam in Mozambique-stunning gorge. 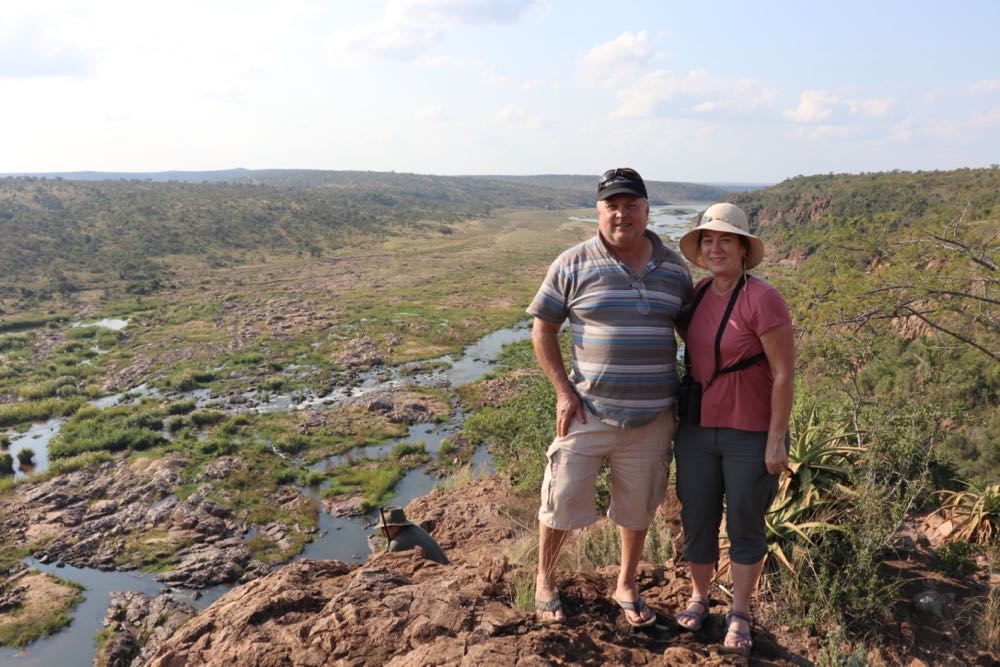 Sabie comes from the Nguni word for go carefully – the rivers have high kaolin content which settles on the rocks, making them very slippery, never mind the abundance of crocodiles and hippos.

Thereafter we headed towards Lower Sabie camp for a quick comfort break before heading to our camp on the other side of the river, called Mlondozi Campsite. Gorgeous spot for a campsite, simple facilities….meaning braai pit, long drop loos and bucket showers, if you have brought your own water. So proper camping. We set up camp, while watching and hearing a storm approach…we settled down around the campfire braving, and just got the meat cooked before the storm hit. Oh my word, thunder and lightening, bucketing rain, and enormous hailstones. We all scuttled to our tents, ate what we could and headed straight to bed…wet clothes bundled at the bottom of the tent. It stormed for about an hour, then started easing off. A lion was roaring quite near the camp, and we heard him on and of the rest of the night at various distances from us. Of course we heard hyaena too and other creatures. Travelled about 90 km.

We emerged from our damp tents on Trail Day 2…. all in one piece, and now had to pack away wet tents! 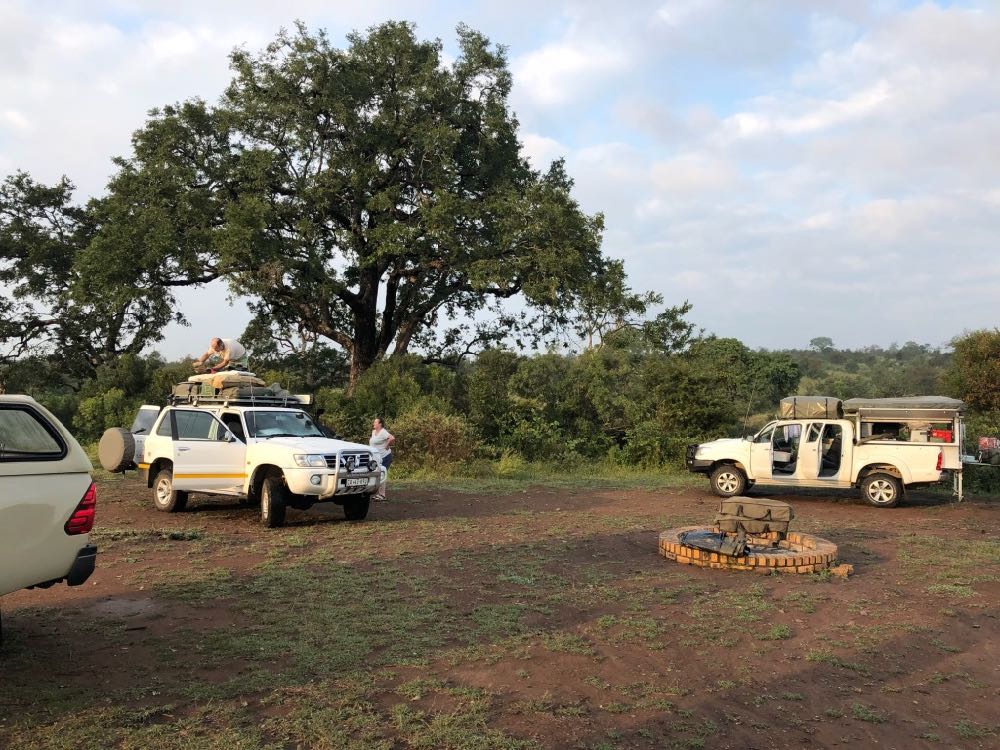 Tea first though. All went well, and we hit the road. We wanted to get to the next camp to clean and dry up our camping equipment a bit. What a beautiful drive…up and down the mountain, very slippery at first because of the rain, but got better as the day went on. We did our first proper river crossing of the trip. Another stop with a view of Nwatisonto river gorge for a quick brunch, next to Mozambique border, before heading towards the campsite. We had a fantastic sighting of a pride of 7 lions…female with teenage cubs just before the river crossing….we were considering having a snack there before spotting the lions! 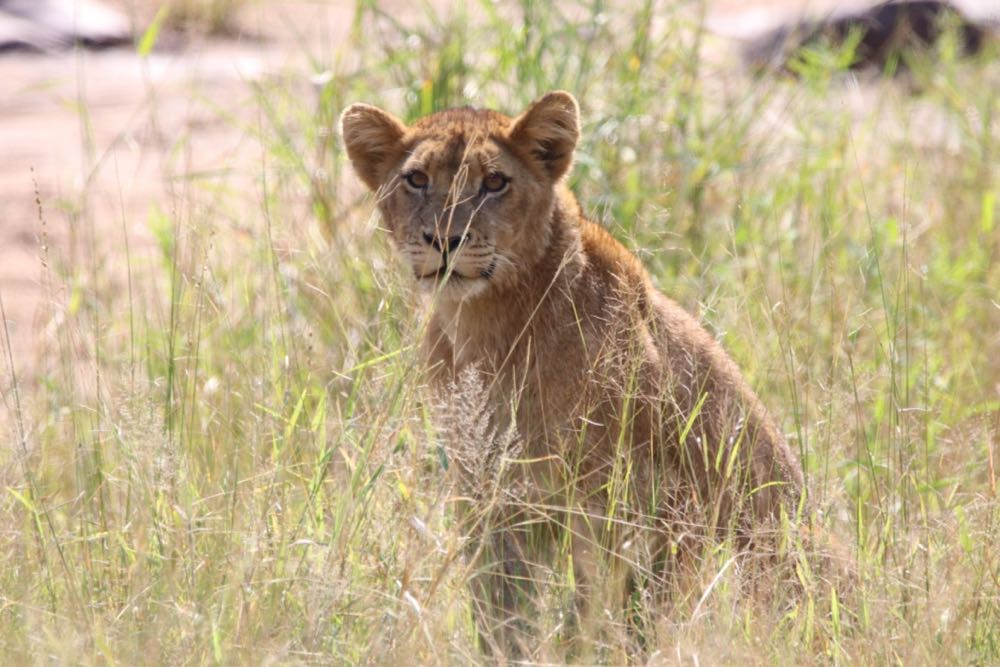 Pumbe Camp is near Satara. Again, simple, clean, functional facilities, all apparently provided by the Honorary Rangers….really nice. We all managed to get everything dry before dark, even had a warm bucket shower, lekker braai, and now tucked up in bed in our roof top tent. Traveled about 140 km.

Trail Day 3 … up at 6 am, kettle on, and started packing up for an early start to get to a shower at Olifants Rest Camp. We are getting better at the packing up of Klippie. Drive through beautiful veld and descended down the mountains onto the basalt plains that seemed to stretch forever. 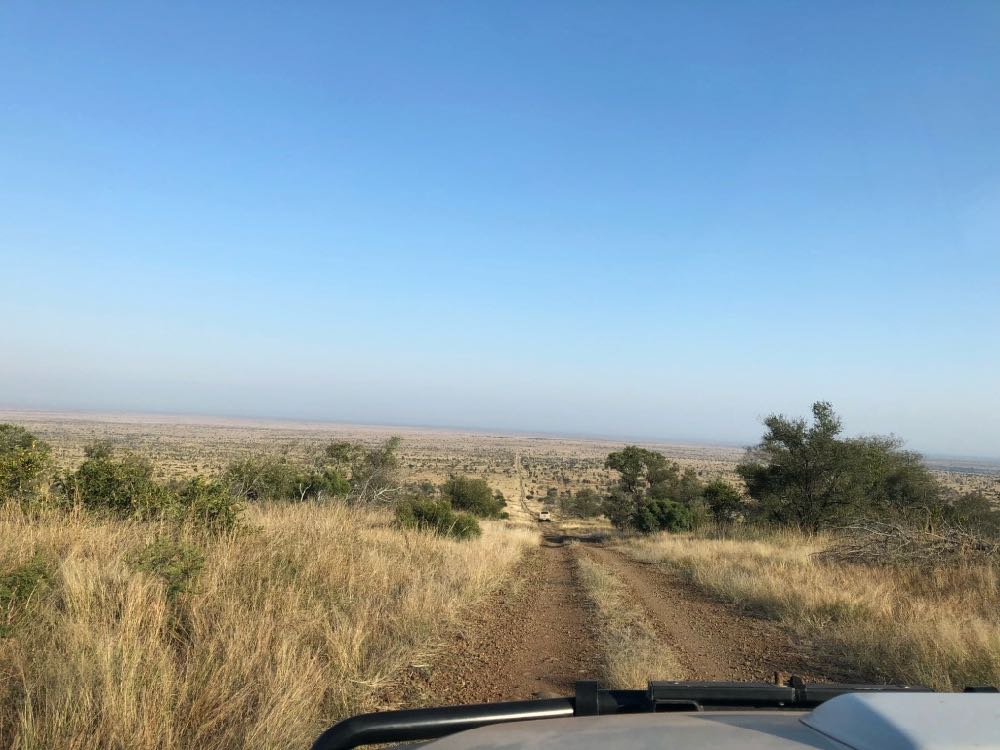 We arrived at Olifants camp, headed to the shop to buy some fresh meat for the next few nights braai, then headed for the best shower I have had in a while! All fueled up and clean, we headed back into the Bush, stopping at a low water bridge for brunch. Then for some serious 4×4 driving, towards, parallel to the border fence again, through bushwillow, then mopane veld. The route then took us slightly inland and we wound our way up a stunning granite rocky little mountain range, with views over the Limpopo Transfrontier Park and then Kruger Park on the other side. Baobabs acting as sentinels along the ridge. 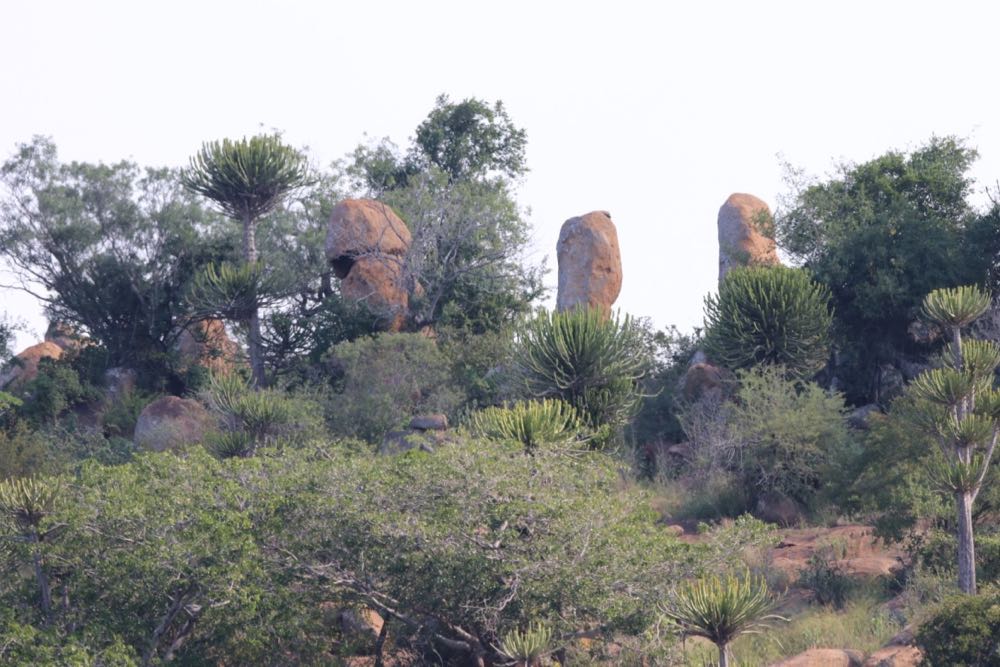 Our camp for the night , Xilowa, is situated at the base of this ridge, on a horseshoe bend in a small river under Tambotie and other trees. 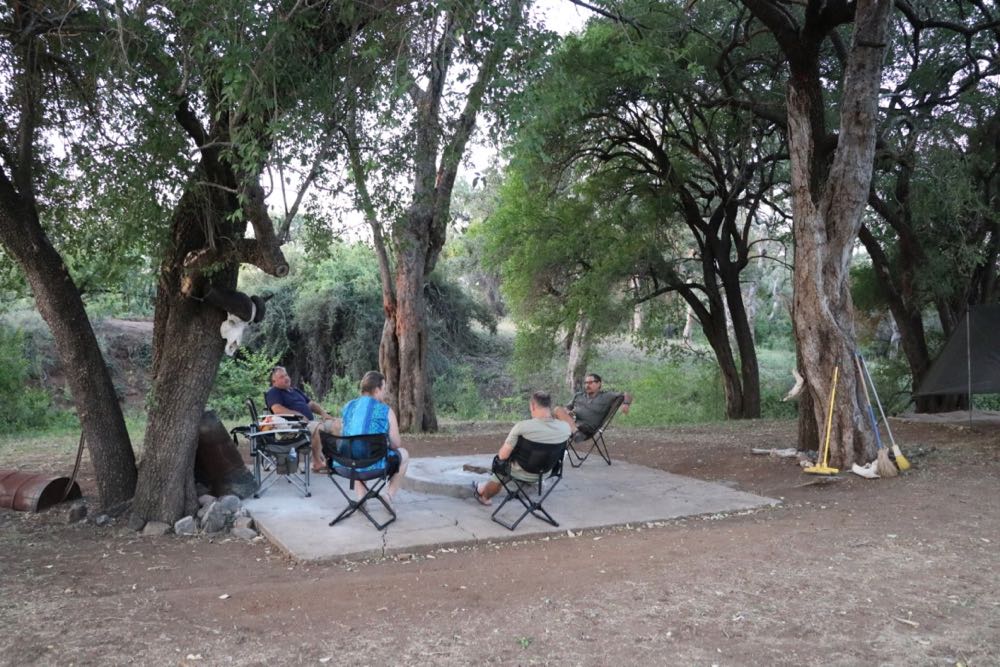 We enjoyed a lovely evening chatting around the fire, great food, and Richard made delicious stewed apples on the fire. Travelled about 130 km. 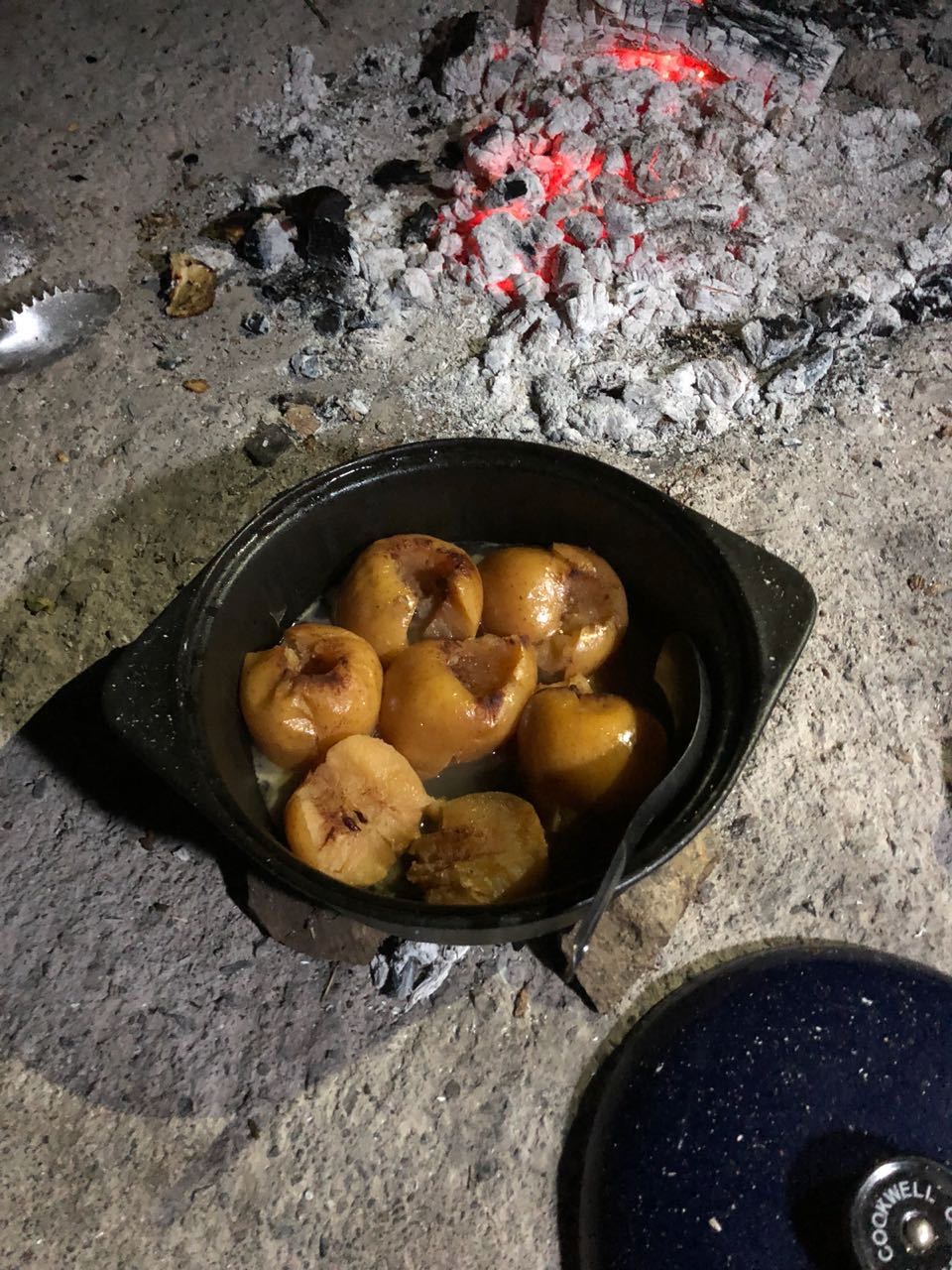 Trail Day 4 is from Xilowa to Nyando Campsites, via Shingwedzi Rest Camp, a distance of approximately 120 km. Our established routine of up at 6 am, tea and pack up at a leisurely pace to enjoy our last few moments at this beautiful campsite. We had heard lions the night before as well as while we were packing up, and wondered if we would see them. Johan guided us to an area that the elephants use as their main migration corridor into Mozambique….they are not following this route currently for obvious reasons, but apparently when they do, this road is literally covered in a meter thick of elephant dung. That is a lot of elephant. Anyway, we were lucky to see a lions catching the morning sun on the rocks. 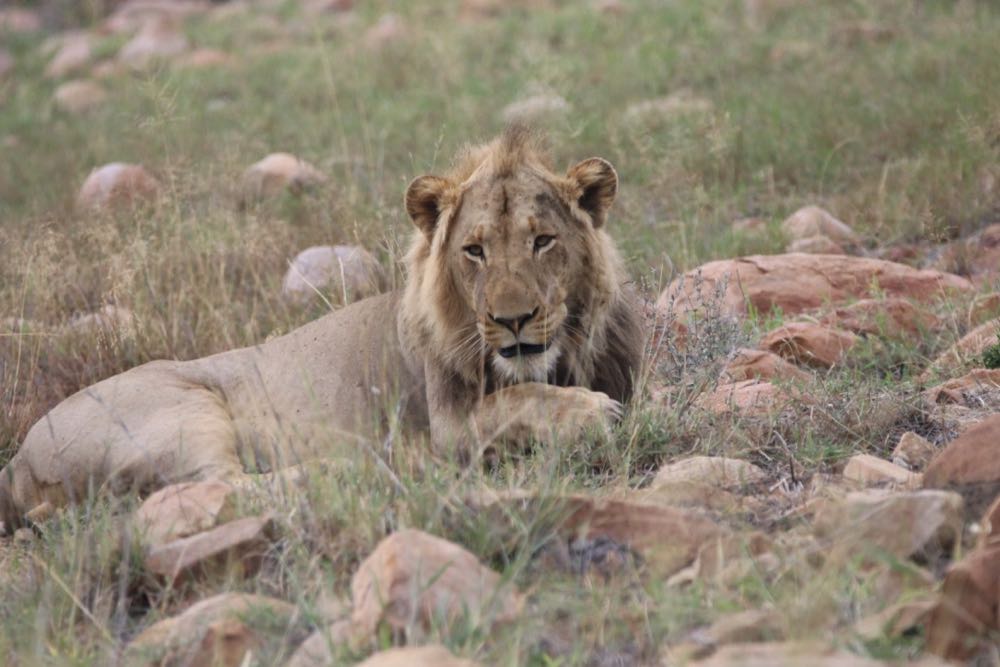 The calling we had heard was a lioness advertising that the pride may come and view her cubs. The cubs were a about 6 weeks old, the male was there- so Dad, and 2 other females. Mom was still very protective of her brood, but they all moved off together into the bush. The drive was again through interesting countryside with a couple of technical bits. Brunch stop was on the Shingwedzi Low water bridge…munching a sandwich while watching birds, dragonflies, a hippo and croc. 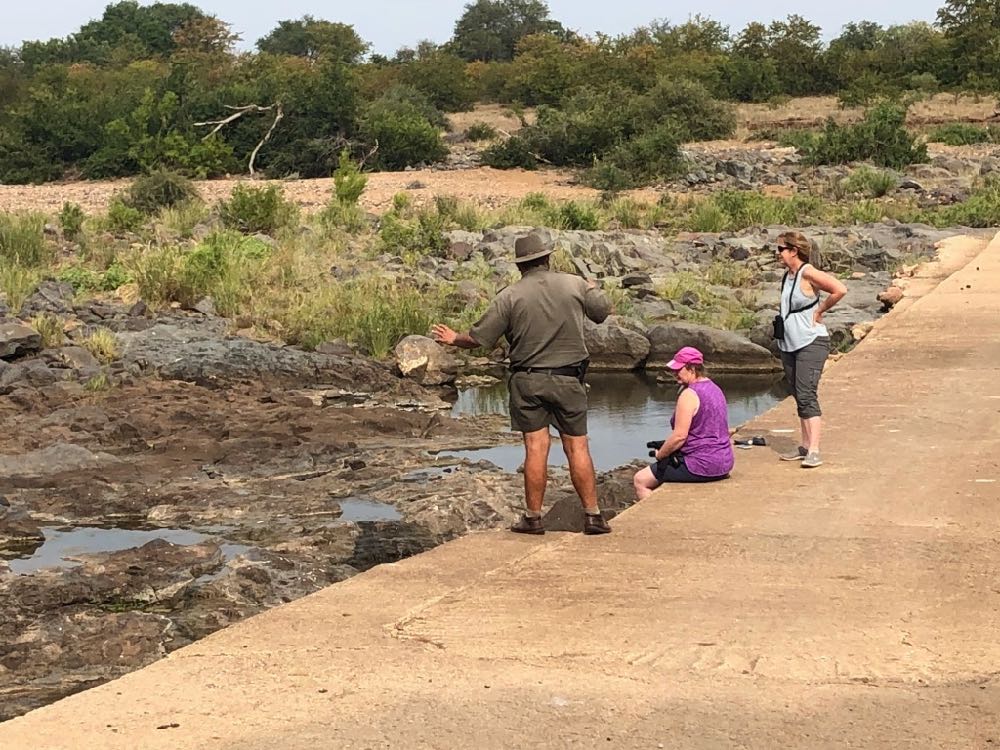 Saw three guys on the Mozambique side through our binoculars….possible poachers…as there is literally nothing else in the area. Later on the road, Johan showed us the remains of a massive bull elephant that had been shot 2 years ago by poachers. Just bones and the rolled of soles of his feet left – that really got to Sue and I. This made me really sad and angry that the life of this old magnificent bull was taken in such a way. No respect. 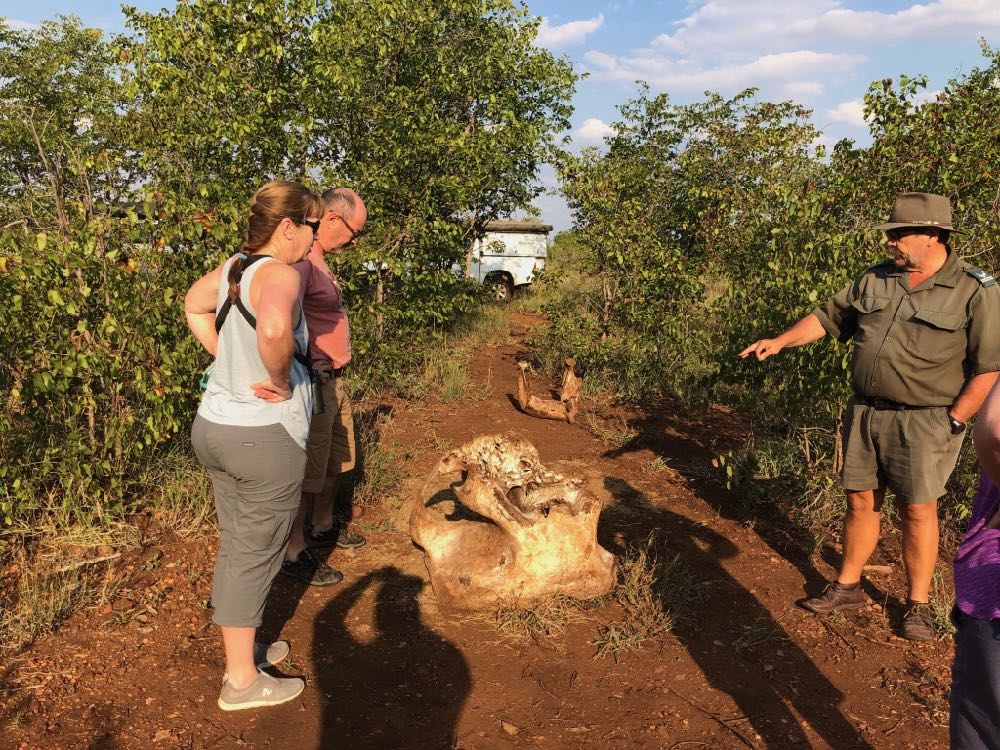 Shingwedzi Rest Camp provided us a shower opportunity , as well as our last chance to fill up with fuel and other supplies before the second part of our trip, namely Gonarezhou, Zimbabwe on Friday. The lady at reception kindly photocopied our electronic equipment list, which we forgot to complete and print out at home…made us a few copies for the border posts. All ready, we headed back into the Bush….through Mopane veld into absolutely stunning Sandveld. What a beautiful part of the park. We arrived at Johan’s favourite campsite…and we can see why. Up went our tents, sundowner, then braai fire lit. Fabulous last evening on the Lebombo Trail. 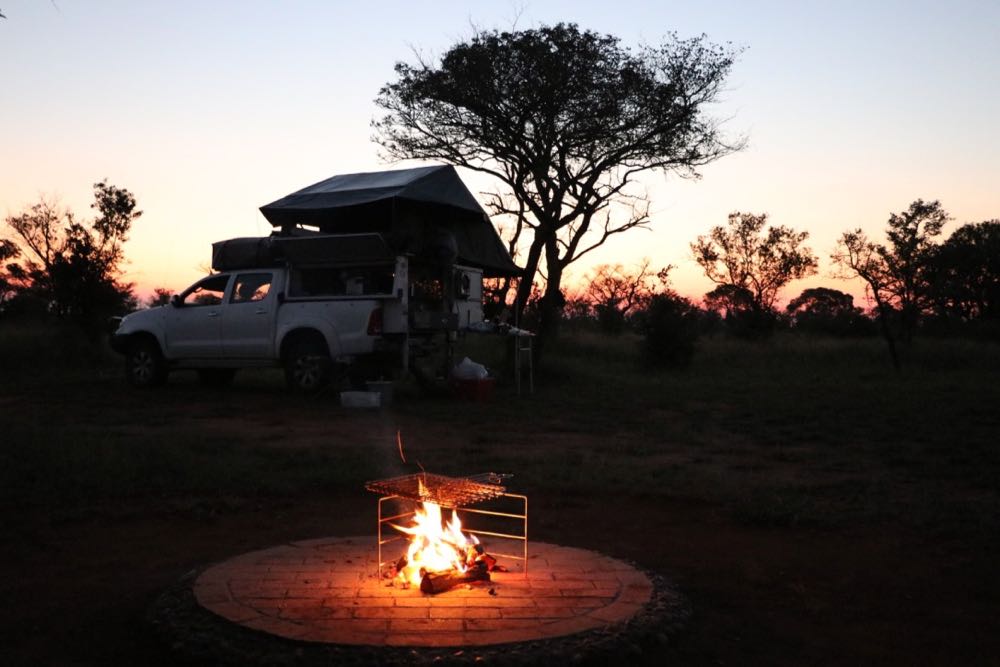 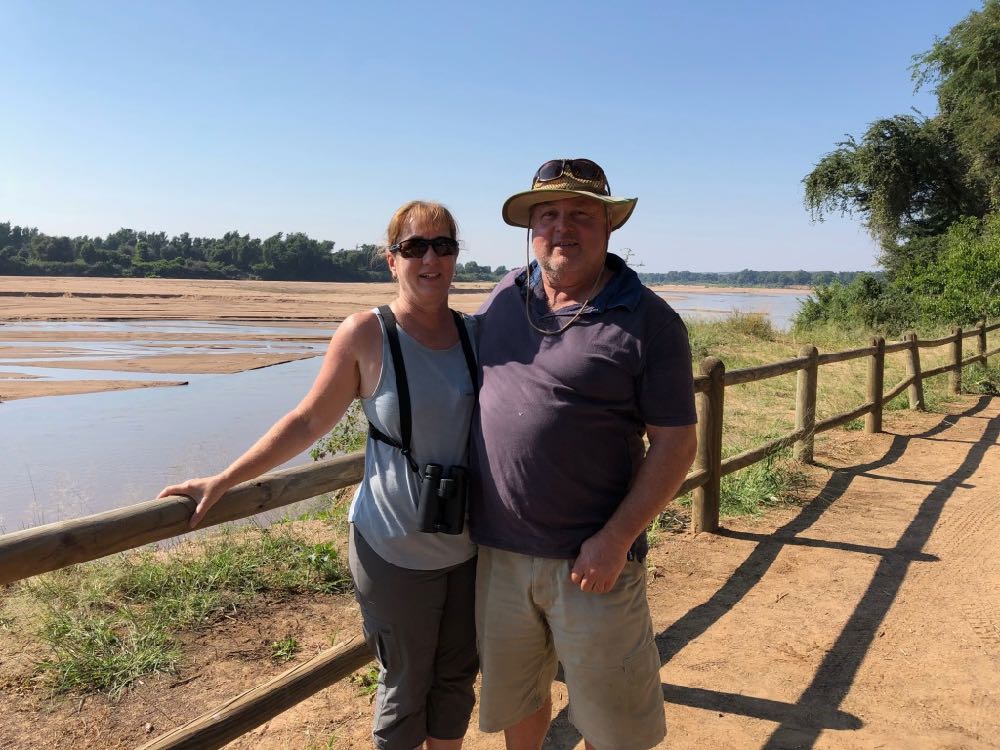 Johan said his farewell at Crook’s Corner overlooking the mighty Limpopo River, and we headed straight up to the Pafuri Camp- we had booked the Doctor’s house. What a treat after 4 nights of bush camping. We cleaned up, did lots of laundry, swam in the pool, and general relaxed. I tried very hard to connect to the internet to upload this blog, but Edge really doesn’t work. Not sure when we will get a chance to upload this.

We all highly recommend the Lebombo Trail for those that love driving in the Bush. What a privilege to be some of the very few people who get to see this part of the Kruger National Park. To book, look on the SANParks website to get the correct telephone number to book. They will then invoice you and one pays in full before the start of the trail. You need to be completely self sufficient re water, food, wood, fuel….although there are 2 stops at Rest Camps to quickly stock up and shower. 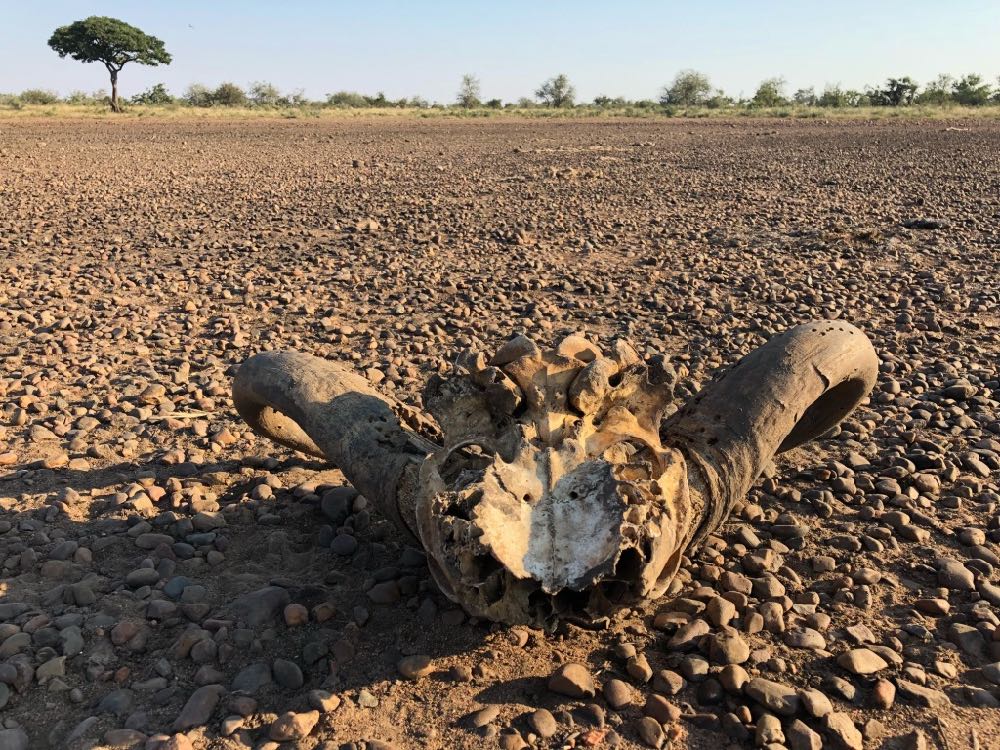 We have had some lovely bird sightings including 2 secretary birds, ground hornbills, brown snake eagle, saddle-billed storks, kori bustards. Mammals did not disappoint either… we were superbly lucky to see an African Wildcat during the day, a rhino, lions, Black-backed jackal, zebra, wildebeest, a hare, giraffe, impala, elephant, kudu, …. 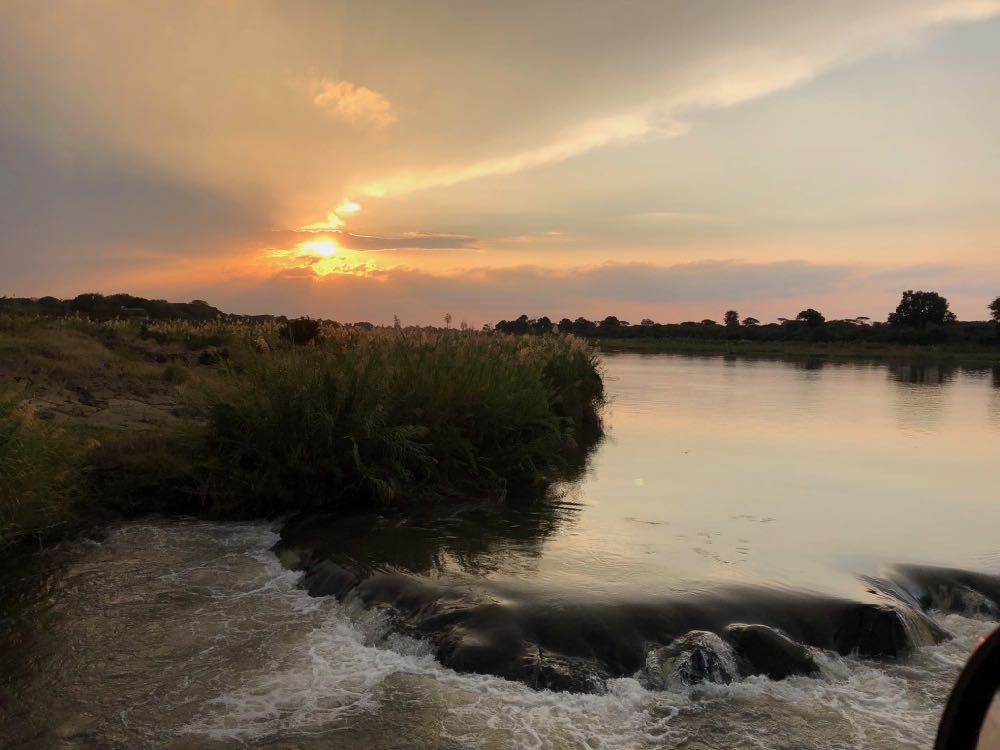